Analysis of Soulstice, the hilarious sword salad that has reconciled me with hack & slash

By CooperSeptember 20, 2022No Comments10 Mins Read 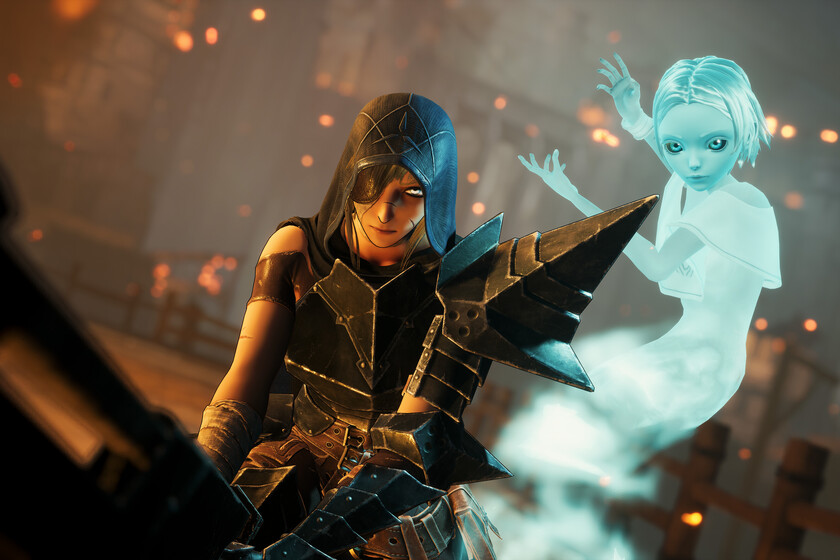 There are genres in the world of video games that you must master if you want to get the most out of a work based on them. Fighting games, rhythm games, or even strategy games are good examples. In my case, I have practically always choked on hack & slash, but soulstice has come to save me from hell.

The Reply Game Studios title stands as the best manifestation of how to make an excellent AA. The Italian studio based in Milan has pulled a huge title out of its hat that will delight the most faithful followers of the action side and convince the most outsiders.

There is not a single moment of respite in the holy realm of Keidas. The city of Ilden has been practically decimated by corruption in the form of specters, which make their way through a huge crack in the sky. Nobody has survived and it is the task of the chimeras to put an end to such a disaster.

Although these beings are the saviors of humanity, their misfortune is enormous when they acquire their status after traumatic experiences. A physical form in the form of a warrior and a spirit that flutters around, showing the strong bond that unites both souls. With this situation in hand, the sisters Briar and Lute are thrown into the battlefield, in what is their first mission as chimeras.

Therefore, player and protagonists are on an equal footing at the start soulstice. Obviously, we will receive the first tips in the form of a tutorial and it is something that practically never stops happening throughout the game. There is always a pinch more surprises to unveil.


It’s perfectly understandable since we have the Ashen Vindicator, Briar’s main sword to deal killing blows, but there’s so much more. Another six weapons will be given to us throughout the adventure, so the possibilities are many.

As I mentioned at the beginning, this is a hack & slash, so action, speed, and chaining combos mercilessly is the order of the day. Far from more complex proposals, in soulstice we will check that we have control of the situation at all times and that we are capable of realizing authentic fantasies on screen without too much effort.

While two buttons allow us to attack with the Vindicator or the secondary weapon that we carry, a third allows Lute to defend us from rival offensives. An on-screen indicator alerts us when we should press and, depending on when we do it, we will block, deflect or slow down the enemy.

Timing issue, but so satisfying as to feel powerful in the fray, as if we were invulnerable. Be careful, it doesn’t always happen in all the fights, because as soon as the monsters begin to accumulate, things go awry quite a lot. Mainly because the game wants us to attend to whose skull we have to crack and not so much what buttons we are hitting.

And it is that in soulstice we do not have an extensive list of combos that we can deploy. They are very few, just four or five, but applicable to all weapons, which makes us feel comfortable with anyone and not dismiss them for not having the ability to control them. In addition, it is essential to remember that each of them deals more serious damage to certain classes of creatures.

With these basics alone he feels fun, frenetic and full of energy. As if that were not enough, the work is placing more crumbs on the road so that we are attentive and incorporate more mechanics. One of the most recurring has to do with Lute’s ability to create energy fields.

There are two, represented by the color blue (evocation) and red (elimination). They can be activated at any time with the press of a button and allow you to reveal hidden crystals, platforms or be able to hit enemies imbued with one of these powers. However, they do have a weakness, as Lute cannot stay in this state for too long, leading to an overload that will break the energy field.

In the middle of this balance we must move in an agile and precise way. soulstice There will come a time when a large number of enemies will be placed on us at the same time, who must be attacked in very different ways, constantly changing between each energy field in order to hit them.

This dynamic does not allow a break in the most demanding sections and we can also find it in the moments of platforming and exploration. Throughout the city of Ilden we will find crystals of each color, with the red ones blocking the way and the blue ones allowing us to access new areas.

Breaking them will grant us shards of each color, the red ones being the ones that allow us to enhance Briar’s abilities and the blue ones those of Lute. Both sisters have their individual menu of skills, with the warrior having the ones that are more forward and Lute’s working more passively.

Not a minor fact is that at the end of each match the screen will freeze to show us a table of results. Style, time and damage received will determine the medals that we will take in each section, which will compute for the end of the chapter. Depending on how well we have performed, the work will reward us with a greater number of shards.

As soon as we advance soulstice and we have distributed the points well, we will become relentless machines. That will be reflected with a spectacular festival of lights, explosions, sword strikes, bolts of energy and an almost uncontrollable succession of chaos. Of course, at very specific points, with a really demanding action, the title loses some frames. Also the confusion of having to constantly exchange energy fields can become saturating if we are very surrounded.

We also can’t forget about synergy, an essential element if you want to get out of the trap that is Ilden alive. Reply Game Studios searched enhance aggressiveness, facing the opposite at all times and not running away unless absolutely necessary. Therefore, the reward for hitting without rest will be to increase the synergy bar.

It is a mechanic that increases the rapport between sisters, allowing us to unleash furious energy attacks. However, if we reach the maximum level, we will be able to unleash the terrible power of anger, which allows us to deliver brutal sword blows for a few seconds. Finally, there is the frenzy, a very particular state with which all the effects of corruption are unleashed. Devastating and dangerous in equal parts.

In this equation we must include the Specters, Corrupted and Possessed. They are the three types of creatures that will come our way to form a fabulous bestiary. Rich in possibilities, imposing in power, each being is governed by its own rules, patterns and defenses. Knowing them will be essential to knock them down and dealing with several at the same time is a joy.

Not to mention the final bosses, which will put us in check on more than one occasion, although it always helps to be able to solve the ballot with a healing potion. And it is that either buying them from Layton, the game merchant and our confidant, or exploring some of the corners of the game.

The scenarios always play with the fixed camera, which is only released in battles, to hide some hidden power-up. Better still is that if we dig well we will find challengeswhich take us to an alternate dimension where we are asked to battle with certain requirements.

Lots of fabric to cut

An aspect that can certainly be questioned soulstice is its duration. The fact that you have a great time destroying everything that moves hangs on a thread, with it exceeding 17-18 hours of departure over 25 chapters. We are talking about a time much higher than what we are used to in hack & slash.

The Devil May Cry are approaching 10 hours as is the case with the Bayonetta saga, to put several references of the genre. Perhaps for this reason the impact of the fighting loses a bit of force, which would have been rounder with a more contained experience.

With everything, soulstice It is justified, since it also wants to tell us a story. Ilden’s plot, the Order of the Ashen Edge, the other chimeras or the mysterious Layton are some of the elements that are placed on the table. A plot that is revealed very little by little, with an excellent pulse and always letting us intuit something more of the mystery that surrounds the cataclysm that has happened.

In fact, there are sections in which we have to use Lute, since thanks to her we can unlock past memories. All this seasoned with a dark setting, very gloomy, with hardly any light and that breathes a life of its own. As expected, the end of the game leaves the wide open door to a sequel and believe me, it would be a shame if soulstice be the only thing we see of this universe.

Special mentions deserve a really powerful soundtrack that knows how to appear in the fray when it is needed and prints more tension. On the other hand, we remember again that we are facing an AA and visually there is no discussion. There are games with a higher budget that implore the technical robustness and the graphic quality that it displays soulstice.

At the beginning of this text I considered myself a hack & slash dropout. Bad experiences with Dante haunt me from the past and just like at the end soulstice, I can only say the same: I had a dwarf time. The experience of surviving Ilden with Briar and Lete has been phenomenal and, in my case, has allowed me to give the genre a second chance.

Reply Game Studios presents itself as a developer specialized in creating AA works and they assert that condition with all of the law. The Italian managers can be very proud to have presented us one of the most pleasant surprises of 2022full of energy to unfold.

Dynamic, unstoppable and with an aura that will make you want to test yourself again, to improve the brand to destroy everything that stands in front of you. soulstice It is a wonder that I can only ask for a second part as soon as possible; the adventures of the two sisters have much more blood to spill.