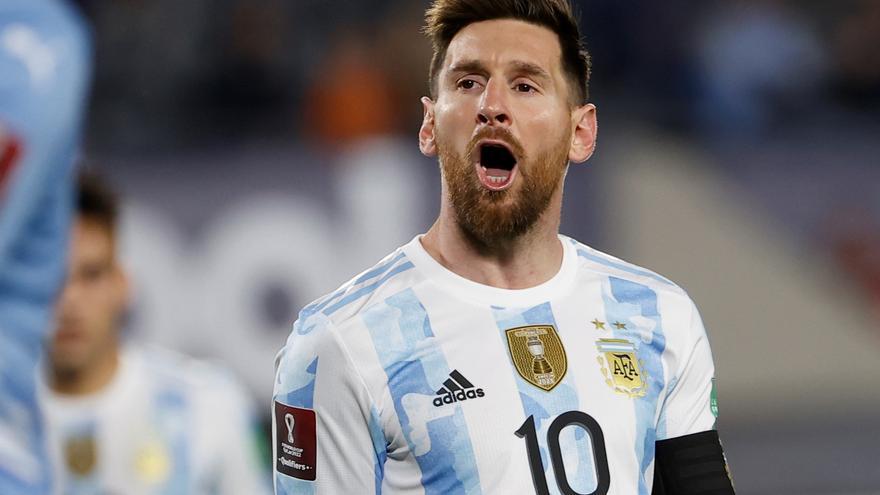 PSG striker Leo Messi has reached 80 goals for the Argentine national team by scoring the first in the wide victory (3-0) over Uruguay in the South American qualifying phase for the Qatar 2022 World Cup. He has achieved a total of 40 in the first half and another 40 in the second half, the last quarter of an hour of the first half (from 30 to 45 minutes) being his fetish time to see the door.

The Argentine, who has arrived at PSG this same summer market after not reaching a renewal agreement with FC Barcelona, He is Argentina’s top historical scorer by a wide difference: Leo Messi completes a podium in which Gabriel Batistuta appears, with 54 goals, and Kun Agüero, with 42 goals., currently a FC Barcelona player after ending the contract with Pep Guardiola’s Manchester City.

80- Lionel Messi reached 80 goals with the Argentina shirt🇦🇷. He got 40 of those screams in the first stages, and 40 in the seconds. Last night, against Uruguay, he became the strip of the match where he celebrated the most: between 31 ‘and 45’ of the PT (18). Balanced. pic.twitter.com/Yyo2wPStcz

The former Barcelona player continues to make history in his career and is getting closer and closer to participating in his fifth World Cup: Argentina, with one game less, is second with 22 points, six behind Brazil, and with an advantage of six over Uruguay, which marks the last place that gives access to the World Cup event. Except for a major surprise, the albiceleste will participate in Qatar 2022 as the current champion of America.

Read:  "We took a big step forward in the Champions League"

Messi will arrive at the Qatar World Cup in 2022 at the age of 35 and in the last year of his contract with PSG. Unless he decided to participate in the next one, already 38 years old, the next World Cup event will be the last of the best player in history. Precisely the World Cup has become Leo Messi’s great obsession: after losing the final in Brazil 2014, it is the only title missing from his record.

The attacker has started a new stage in Paris after leaving FC Barcelona unexpectedly. The club’s economic crisis has denied him the option of continuing in the club of his life and he will try to win a new Champions League with his great friend Neymar Jr. Kylian Mbappé in a PSG that has one of the most powerful squads in all of European football.

” I put the ball in front of where they left me ”