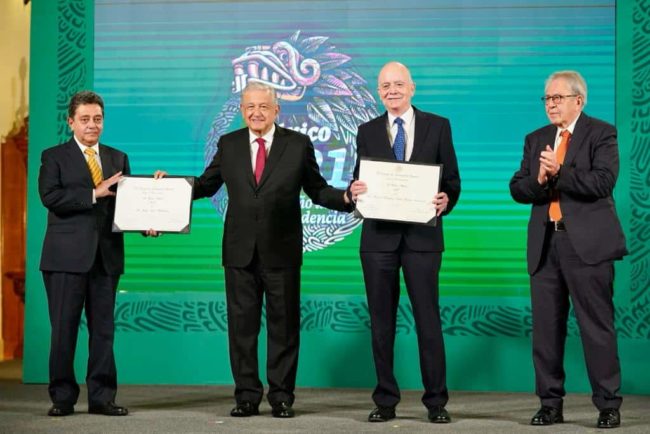 During the ceremony, the awardees received a diploma. This distinction is awarded to doctors who, throughout their professional lives, stand out for their recognized vocation of service and dedication to the training of generations of professionals, as well as for their contributions to medicine and the consolidation of health institutions .

In this regard, the Secretary of Health, Jorge Alcocer Varela, called to build the Day of the Doctors and Doctors from the fraternity, and called on professionals in the field to be clear about the principles and defend the values. He added that the medical sector represents the professional and human effort to give everything in its present for future generations and for others. They are heroes and heroines who fight great battles to preserve life and human dignity. He also made a posthumous recognition to the health professionals who died in the line of duty.

For his part, the secretary of the General Health Council (CSG), Jose Ignacio Santos Preciado, reported that for the second time in 26 years the Recognition of Medical Merit is shared between two distinguished doctors. He stressed that, by awarding these distinctions for their contribution to medical science, the work of the entire union is recognized. In addition, he announced that this year the highest number of applications in the history of recognition of medical merit was received, with 174 applications from different institutions in the country.

“From whatever trench we find ourselves in, being doctors we have above all a great social commitment, our banner and insignia come from our training, our duty to be and our commitment to duty accomplished.”He declared.

On the other hand, the Secretary of Health stressed that thanks to the modifications to the National Examination of Applicants to Medical Residences (ENARM), by next year at least half of the places for medical specialties that are required in Mexico will be covered.

During the Health Pulse, the official highlighted that the study carried out two years ago showed that 140,000 general practitioners, 30,000 specialists, and 300,000 nursing professionals are required, as a result of a progressive inheritance of staff shortages from health that was accentuated during the pandemic.

Regarding the issue of the COVID-19 pandemic, the Undersecretary of Prevention and Health Promotion, Hugo López- Gatell Ramírez, announced that Mexico is about to reach the goal of vaccinating the entire adult population with at least one dose before October 31.

Per day they supply more than 550 thousand doses on average and up to this date 117 million 240 thousand vaccines have been applied to 71 million people, which represents an advance of 79% in the 32 states.

For the third consecutive month, the number of cases continues to decline and to this day, less than 1% of active cases are registered in the country and less than a fifth of the general care beds and those with mechanical ventilators are occupied.

Likewise, since the first day of return to face-to-face classes on August 30, only 0.15% of schools have had some cases of COVID-19, which shows that schools have not represented a risk factor for exacerbating the disease. epidemic in minors.