“He decided to be happy”; Naruto-themed birthday party goes viral 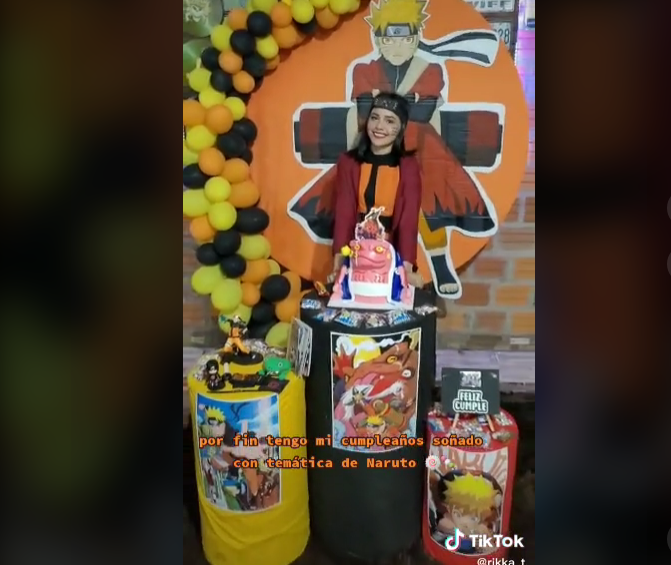 A TikTok user shared through two videos how it was to have made a Naruto-themed birthday party. With this initiative, the user fulfilled the dream of several fans of the anime by representing several of the most important characters in the Japanese series.

Naruto and Naruto Shippuden have a total of 27 seasons and 911 chapterswhich narrate the story of the eponymous character and his transition from a rookie ninja to becoming the “Hokage” of the village, that is, the leader.

Anime culture in this technological age

For the Japanese country, the anime It is a fundamental aspect of their culture. According to the latest research by Dentsu, among the 20-29 age group, 64 percent responded that they are interested in the animewhile the corresponding figure for those aged 15 to 19 was 72.4 percent.

For young people today, anime It is not considered a minor entertainment, but thanks to its impact, enormous communities have even been generated. In fact, its presence and impact in the world outside of Japan has been so great that even streaming platforms streaming and Netflix have decided to add content of this type to their catalog.

As reported by Variety, Netflix has confirmed that more than half of its subscribers use the platform primarily to watch anime..

“Anime is one of the cornerstones of our investment in Japan, watched by nearly 90 percent of our members here last year,” said Kohei Obara, creative director of anime at Netflix. “At the same time, interest in anime has grown around the world, with more than half of our members worldwide tuning in to it in the past year.”

Read:  This is how Mexican fans prepare the Dr. Simi for Dua Lipa's concert

In the same way, a year ago Crunchyroll, becoming one of the largest platforms in streaming of anime. So, it reached 3 million subscribers, while six months ago they reached 4 million. Now they announced that they have surpassed 5 million paying users worldwide and more than 120 million registered users in total.

“Joanne Waage, General Manager of Crunchyroll, mentioned that: “The tremendous growth of our service is indicative of the growing love for anime and its well-deserved prominence within popular culture.“.

“He decided to be happy”; Naruto-themed birthday party goes viral

A user viralized two videos where it shows how it was to have carried out a theme party of one of the most famous anime in the world: Naruto.

The young woman managed to fulfill the dream of anime fans, even recreating one of the most characteristic outfits of the main character of the anime. anime.

The first video reached 125,000 views, while when the young woman was asked up to what age it was possible to continue having a birthday with these themes, the account holder replied “There are no limits to being happy.”

These were some of the videos shared by the user around her birthday party: