Bullfrag
Home Update Galician chef Pepe Solla tells us how to take advantage of it... 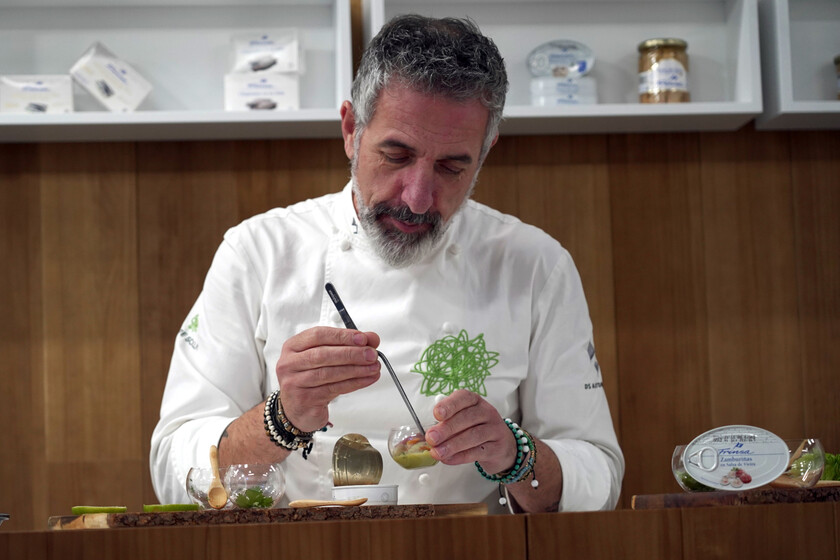 We have seen it do all our lives. We open a can of cockles, sardines or mussels and we flush all the liquid down the sink of it, to later serve the product on a plate.

We think that this covering liquid – or of government -, whether it be water, oil or some other sauce such as pickle, only serves to keep the product in good condition. And perhaps this is its main task, but it spends months or years in contact with it, which gives it properties that are impossible to find in any other preparation.

How does he explain to Direct to the Palate the Cook Pepe Solla, chef of the Michelin-starred restaurant in Pontevedra that bears his surname, “It is absurd to throw this away”, Well, be it water, oil or a sauce, they are liquids that can enrich many preparations.

Use canned liquid at home

Solla is one of the greatest chefs in Galicia and, how could it be otherwise, he is a great connoisseur of the local product. He has also been working for years as cannery ambassador Frinsa (Riveira, La Coruña), one of the largest European manufacturers of tuna and canned seafood, with whom it collaborates to publicize this exceptional product.

As the cook explains, the cover liquids they are used more and more in haute cuisine. In 2015, Solla presented some of its techniques in Madrid Fusión, such as preparing an air by adding soy lecticin to the water of the cockles or a gelatin with the liquid from the clams, which is denser and slightly sweet.

Pepe Solla after the inauguration of the new Frinsa pop up store in La Coruña.

But, as the cook tells us, liquids can be used in home cooking in very simple and surprising ways. We have reviewed from his hand the usefulness of water, oil and sauces that we find in preserves, which they can be very useful now that Christmas is coming and we will spend more time in the kitchen.

Although it is the liquid that we tend to discard the most, Solla points out that the water in cans of natural canning –whether clams, cockles, razor clams or any other product– is still a broth that can be used in any preparation.

“It is easier to use water than oil because it is a broth, which is the most important thing in cooking,” says Solla. “When you do a fish stew Instead of adding water, add this razor clam broth, cockle broth, and the fish stew will be exceptional ”.

This water can be added to any fish soup or stock to increase the intensity of its flavor, but also to all kinds of stews in which, simply, we want to enhance the taste of the sea. Also, for example, to cook the pasta that we are going to use in a dish with fish or shellfish. Why not add it to the cooking water for spaghetti with frutti di mare?

Solla also uses the government liquid in ceviches. “You mix it with zest and juice of lime and lemon, chives and coriander and you can drink that liquid alone. You have a base to make any ceviche, but you can also put it with the cockles themselves ”.

In addition to pure ignorance, we do not usually use the water from cans of cockles or clams because we can’t think of what to do with it at the moment to open these. But this is solved very easily: freezing it.

“When you open the can, sterilization is lost,” explains Solla. “I could put up with you for a couple of days, no more, but if you freeze it in an ice cube bag you have the perfect doses to give an important taste to any recipe ”.

The oil present in bonito, tuna, or sardines, absorbs the taste of fish, and can be used in any preparation in which we seek to enhance it.

“Fat is the one that fixes the most aromas”explains Solla. “In all kitchens we aromatize the oil, but all the flavor of the product is concentrated in a can. With that oil you can do everything: sauté, dress a salad, make a pil-pil or mayonnaise … “

The oil in the cans can be used in any preparation that requires normal oil, always remembering to filter it well. Obviously, the quality of the oil will depend on the supplier of the canning plant: a refined sunflower oil is not the same as an extra virgin olive oil.

In this sense, Solla recommends looking closely at the labels. “You can make a very good canning, but if the cockle is from Noia it is better than the one from Chile, and if the oil is olive, it is better than sunflower “explains the cook.

It should also be noted that unlike water, in which there is no evolution once the product is sterilized, oil or sauces gain whole as can ages. “Today we have to expire everything by law, but canned foods are for preferential consumption, and they are better after four, five or ten years,” explains the cook.

In addition to water or oil, there are preserves that are stewed. The clearest example is that of the pickled mussels, one of our favorite cans, whose liquid should never end up in the sink.

In Madrid we are very fond of pouring the liquid together with the mussels over the fried potatoes (a simply wonderful appetizer), but as Solla explains it can be used for many other preparations: “If you make a cooked or grilled fish and put this marinade you have a super tasty fish. Or make a paste and dress it with that subtle hint of vinegar. It is outstanding”.

Again, the final result will depend a lot on the quality of the product. Few processed products have a price range as disparate as that of canned fish, but the difference between a one euro can of mussels and another of five is abysmal.

“Just like you go to the market and you can find a hake of seven and another of 27 and everything is called hake, there is a difference, and the 27 is always better ”, explains Solla. “And the same thing happens in canned food. The price is set by the product, it is not the same to use local products and good oil than to make everything outside ”.

We are talking, however, of a product that, even at its highest quality range, we can all afford it. For this reason Solla encourages you to buy good local preserves, of which we can use until the last drop: “The price usually increases less because you have to sacrifice margins to don’t get too out of the marketIt tends to be much better in quality without greatly increasing the price ”.