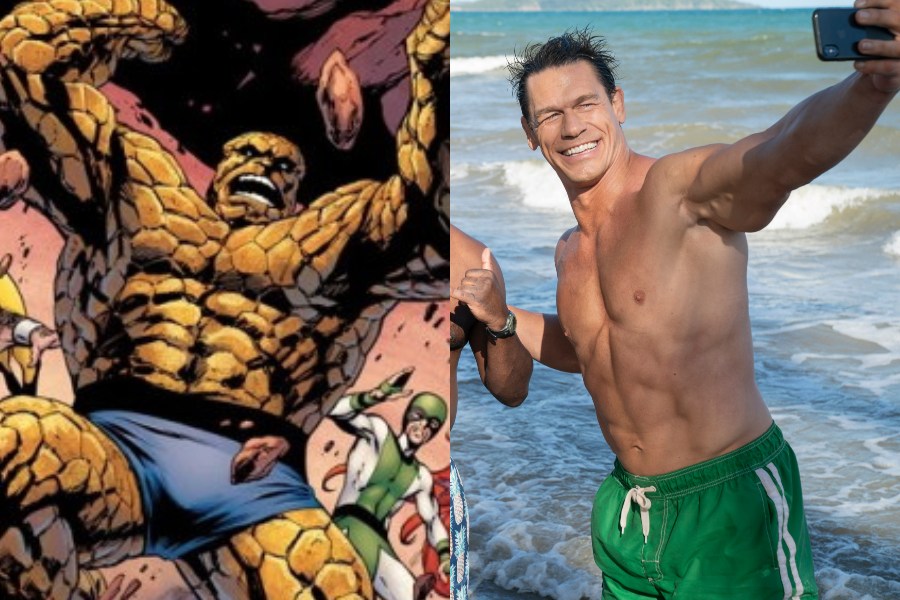 Marvel Studios has yet to reveal the cast of the Fantastic Four reboot in theaters, and wrestler and actor John Cena responds if he’s looking to play Ben Grimm / The Thing.

Marvel Studios has the return to the big screen of the first superhero family, Fantastic Four, on the horizon. Millions of fans already want to meet the cast that will play the heroes created by Stan Lee and Jack Kirby, including The Thing, a character that could include John Cena.

It may interest you: Fantastic Four: The 10 best inventions of Reed Richards

In a video for Esquire magazine, John Cena was asked if he would like to play Ben Grimm / The Thing in the Fantastic Four reboot on the big screen.

“I would consider almost anything. I think staying open to different options and perspectives is a good way to live life. This would just be something I would consider, because I like to keep my perspective open to new things.“.

The WWE wrestler has focused in recent years on his career on the big screen, and in 2021 he was part of the cast of The Suicide Squad, a film inspired by the group of villains of the Distinguished Competition.

When will the cast of Fantastic Four be unveiled?

Kevin Feige, president of Marvel Studios knows that the excitement of fans to meet the new interpreters of Reed Richards, Sue Storm, Johnny Storm and Ben Grim is too great, so the head of the House of Ideas films him ask the fans for patience.

“I don’t think it’s soon… Black Widow is our first red carpet event in two years. We’ll see what happens with the next fan meetings and events where we can release more news. “

Read:  The creator of the Arrowverse will make a Marvel movie

Throughout a decade The Fantastic Four to the cinema three times, the first in a 1994 film, which went directly to video. 20th Century Fox produced the 2005 Fantastic Four, and the 2007 sequel Fantastic Four: Rise of Silver Surfer, both directed by Tim Story.

In 2015, filmmaker Josh Trank directed the reboot of this team in a film that passed with more pain than glory in theaters, whose sequel was immediately canceled.

Marvel Studios has scheduled the dates July 28, October 6 and November 10, 2023 to premiere three productions. One of these spaces on the calendar would highlight the return of Fantastic Four to the big screen.

Don’t Miss: The Fantastic Four Story Will Be Covered In Marvel Studios Movies And Series