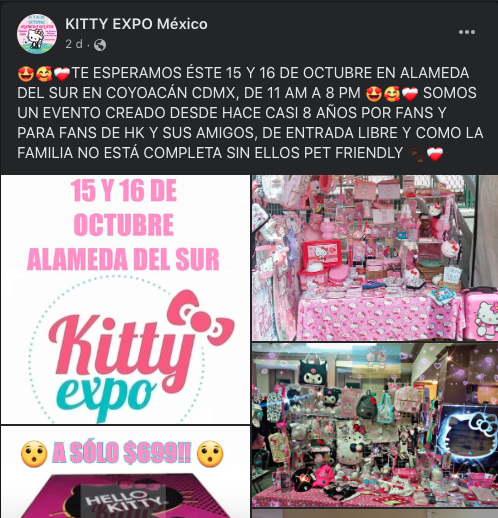 The Japanese company sanrio, created in 1960 by Shintaro Tsugi, is well known for its Hello Kitty character and has many fans around the world. At CDMX, a group of fans organized an exhibition of this famous character, which will take place on October 15 and 16.

Although Sanrio has another 400 characters, Hello Kitty is the best known character worldwide and has a great presence in more than 100 countries. with the sale of clothing, accessories and footwear. It also has theme parks in Japan, Malaysia and China; It also has brand stores in other countries such as the United States, located in its theme parks such as Universal Studios, Hollywood and Orlando.

According to its official figures, Hello Kitty is valued at 7 million dollars and has a presence in various products and services. To make the character of the kitten known, the company strategically used agreements with other brands and the use of licenses to be present everywhere and thus turn it into a global product. Some of the brands with which he has collaborated are Vans, Swarovski, Sephora, Converse, Levi’s and Puma.

Hello Kitty is still present among young people due to the incursion she has had on social networks, her official Instagram account has 2 million 300 thousand followers and then when she debuted as a youtuber in 2018, which began with 30 thousand subscribers and her first video had 200 thousand views.

Read:  Even the biggest fans of One Piece will have a hard time recognizing these two original versions of Nami.

Hello Kitty has a strong presence in Mexico and its products are sold in various establishments; In addition, it has a consolidated group of fans that has a wide collection of accessories. The group called Kitty Expo Mexico organized an exhibition of this character aimed at all fans and friends who like it.

According to the publication, they have been holding the exhibition for almost 8 years and highlight that it is an event organized by fans. The event will take place on October 15 and 16 at Alameda del Sur in Coyoacán. It is not an official event, but this event serves to promote the brand in CDMX and demonstrates its validity.

In the Facebook group they also have various brand products for sale and announce events that they will have in other states of the Republic.

This is not the only event organized by fans that takes place in CDMX, the Facebook group Fan Fest is in charge of promoting thematic exhibitions organized by fans and they take place in the south of CDMX. The last organized event is the ‘Ghibliland Fan Fest’, which will take place next Sunday, October 16 and will include autograph signing, bazaar, conferences, cosplay contest and photo area.

The above is an example of how fans organize events for their favorite brands to sell official and unofficial products, which have served as a form of promotion for brands, since it keeps them current in people’s tastes.

This is how the new Nike Hello Kitty looks: anthology co-branding

Hello Kitty arrives in CDMX at Christmas; It will be the first official cafeteria in Latin America

What does Hello Kitty teach about digitizing pets?