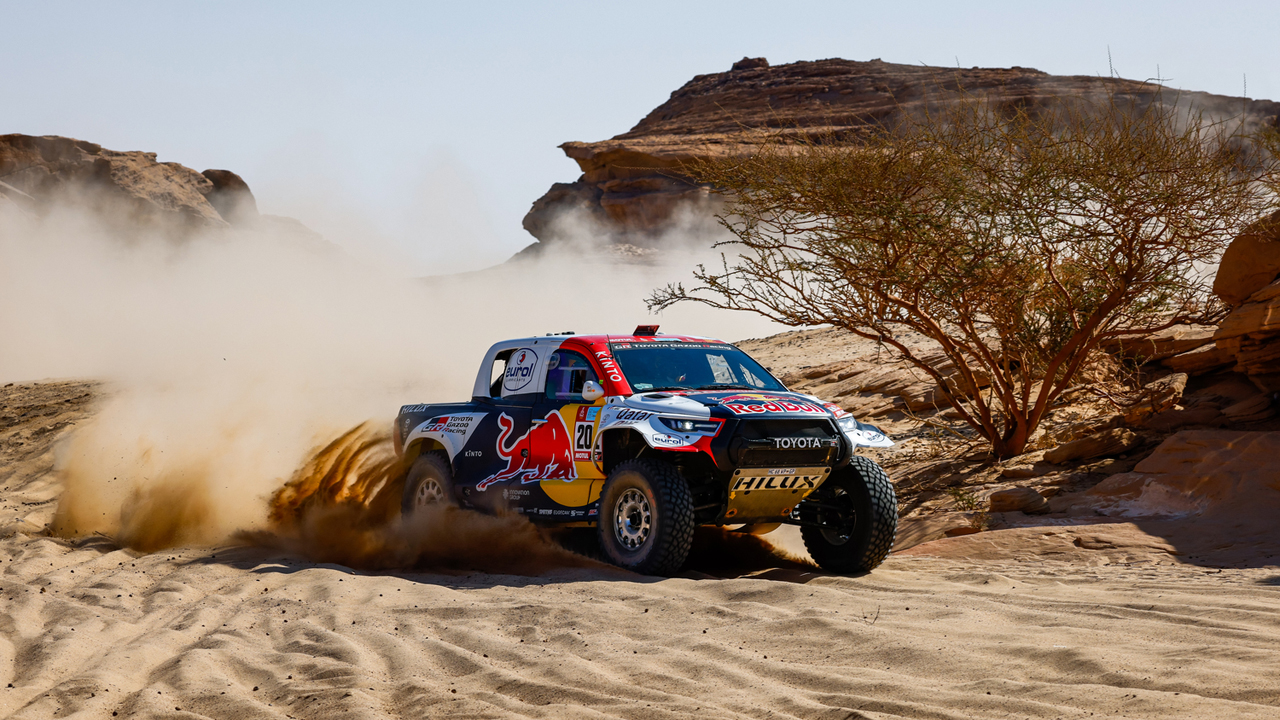 Nasser Al-Attiyah has achieved victory in the 44th edition of the Dakar in the car category. The Qatari driver took advantage of the buffer of time achieved in the first stage to manage his advantage throughout the rally with a Toyota GR DKR Hilux T1+ that showed no weakness. Despite his efforts, Sébastien Loeb has had to settle for second place overall, while Yazeed Al-Rajhi has completed the podium of this Dakar. Carlos Sainz finished twelfth overall in a rally in which Henk Lategan has scored the victory in the last stage.

Index hide
1 cars
2 ‘Side by Side’
3 trucks
3.1 Sam Sunderland achieves his second Dakar in Jeddah, first for GasGas

Henk Lategan has scored the victory in the last stage of the rally after beating Stéphane Peterhansel by 49 seconds and Brian Baragwanath by almost two minutes. Result that has gone a bit unnoticed, since All the spotlights have focused on the figure of the Qatari Nasser Al-Attiyah. The Toyota driver reached the finish line to certify his fourth Dakar, second with Toyota and first with the new T1+ of the Japanese brand developed by its subsidiary in South Africa. A success forged in a “magical” first stage that has served Nasser to live on the “rents” during the rest of the rally.

Nevertheless, the trio formed by Nasser Al-Attiyah, his co-driver Matthieu Baumel and the Toyota GR DKR Hilux T1+ has shown no fissure. In fact, Sébastien Loeb finished 27 minutes and 46 seconds behind the Qatari, while Yazeed Al-Rajhi was third overall in the race, more than an hour behind the winner. The best Spanish representative was co-driver Dani Oliveras, fourth along with ‘Orly’ Terranova, although Carlos Sainz and Lucas Cruz finished in twelfth position with the second of the Audi RS Q e-tron hybrids, since Mattias Ekström has managed to enter the ‘top 10’ of the race.

Armand Monleón closed the Dakar together with Lucio Álvarez in 18th place, although for much of the race they have fought for the ‘top 5’. Behind, Laia Sanz has signed a magical debut in cars that has led her to finish in position 23, while Isidre Esteve finished in 27th place. For his part, Óscar Fuertes was 34th, while Nani Roma finished in 50th position, hampered by mechanical problems that led him to penalize 30 hours. Within the category of cars, Carlos Checa has also reached the finish line in his first Dakar.

The twelfth stage in T3 has ended with the traditional victory of Seth Quintero, which raises the record for partial victories achieved in this Dakar to twelve. Beyond this point, ‘Chaleco’ López has conquered the ‘Touareg’ within the category, leading the EKS – South Racing team double, as Sebastian Eriksson finished second overall. For its part, the Spanish Cristina Gutiérrez closes the T3 podium weighed down by the reliability failures of its OT3, but with a good general performance. In fact, the 4 and a half hours that he has lost with the winner is not a reflection of his performance.

Read:  Mercedes hits rock bottom; Hamilton and Wolff, sunk after the humiliation of the Sprint

The T4 category has fallen on the side of Austin Jones, as expected. Although Gerard Farrés reached the last stage with an advantage, the Spanish driver has complied with the team’s orders and he braked in the last section of the special so as not to overtake his leader, since Farrés was able to be in Saudi Arabia on the condition that he act as a backpacker for Jones, since he did not have enough support from his sponsors. Nevertheless, Farrés has completed the Can-Am double, while Rokas Baciuska has closed the podium after winning the last stage and snatching third place at the last minute from Marek Gozcal.

Dmitry Sotnikov has managed to successfully defend the ‘Touareg’ that he won at the Dakar 2021 in the truck category. At the controls of the new KAMAZ, Sotnikov has repeated this success and can already boast of having two wins to his credit. What’s more, Dmitry closed the rally in the best possible way, with a stage victory in the last special to certify the full number of victories of KAMAZ in each of the days of the rally. Not wanting to take a single risk within the Russian team, the stage was more open than usual and that allowed Martin Macik to finish second, while Ignacio Casale has closed the podium of this last day.

KAMAZ has not only achieved victory in each and every one of the stages of the 44th edition of the Dakar, but He has also achieved the long-awaited 1-2-3-4 in the general. Dmitry Sotnikov has achieved victory with 9 minutes and 58 seconds ahead of Eduard Nikolaev, while Anton Shibalov has finished third. The ‘ugly duckling’ of the team this time was Andrey Karginov, fourth overall. For its part, Janus Van Kasteren was the best of the ‘rest’ after finishing fifth with one of the four IVECOs that have occupied from fifth to eighth place overall.