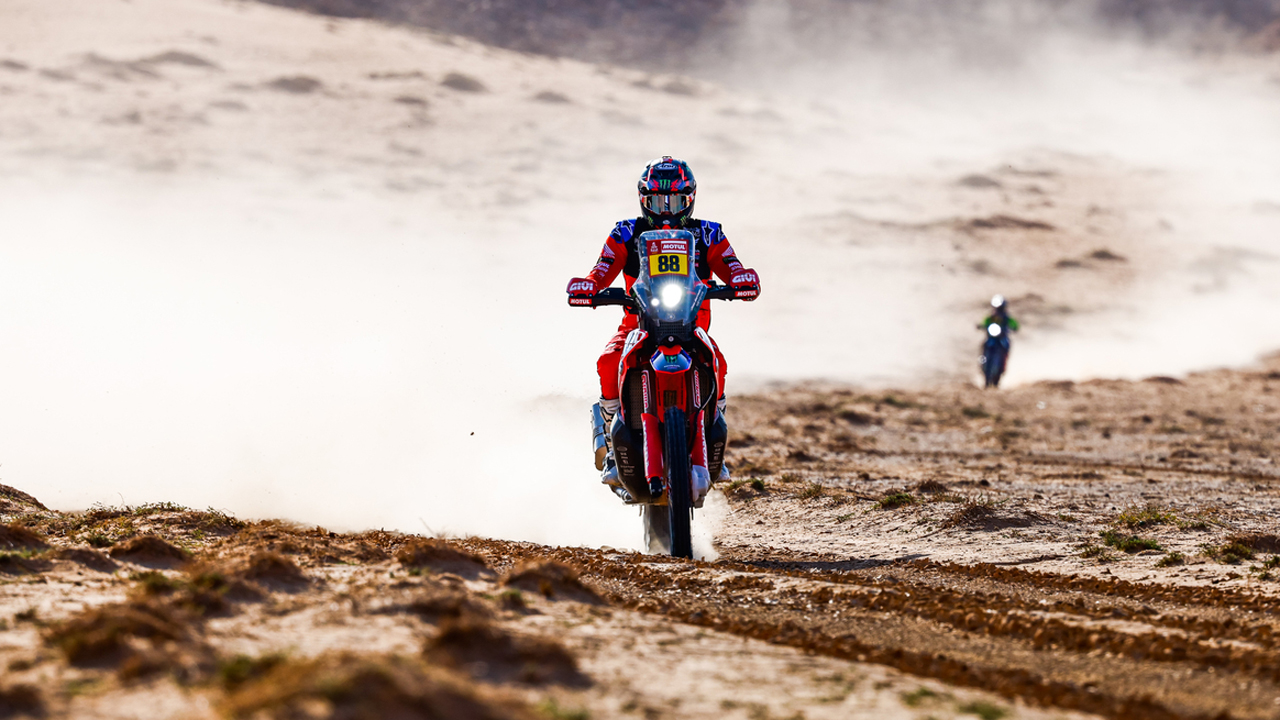 The ninth stage of the Dakar 2022 has once again had a bittersweet taste for the Spanish representatives. The most bitter note has been the serious fall suffered by Isaac Feliú and that has required his hospitalization. On the opposite side is Joan Barreda, who has signed another good performance and is emerging as the only Spaniard with options to conquer the victorious final. Especially after 15-minute sanction imposed on Lorenzo Santolino after changing the engine of his Sherco. It is true that we must not forget that Gerard Farres is second overall in the T4 category, 13 minutes and 47 seconds behind the lead.

Joan Barreda He finished fifth, 2 minutes and 10 seconds behind the winner, the Chilean Nacho Cornejo. In the general, he is sixth, just under 11 minutes from the lead: «Today has gone quite well. He started tenth, with several drivers ahead. I have set a constant pace, making good decisions regarding navigation. As the kilometers have passed, I have been feeling a little better and the last part, I was able to push more. The truth is that the riders in front have navigated well and have not made mistakes, so the pace has been quite high. We have not been able to recover much compared to those in front, but the positive is that another stage has passed. We have a chance to fight for the Dakar, recovering our physique every day. The objective is to reach the goal giving the maximum».

Lorenzo Santolino it was not living its best stage. A navigation failure and a flat tire were wasting him a lot of time. The 15-minute penalty for changing the engine in his Sherco ended up ruining his options. In fact, it is very likely that the Salamanca driver said goodbye today to his options to make the ‘top 5’: «Very fast stage. The area with more navigation has been opened very well and it has been very fluid. I have tried to shoot fast from the beginning and the truth is that I have found myself fine. Then I made a navigation error in a canyon. I have gone for some marks that there were, I have been confused a little and I will have lost about three minutes. From refueling to the end I tried to keep up a good pace and I recovered a bit. Let’s see how the stage was tomorrow and if we can recover a bit. “

Sandra Gomez The day ended with a very good feeling: «Today went quite well. I can say that it was the day that I had the best time because there were huge dunes and I was able to give a lot of gas. I have followed three quads that had been lost before and, hooking on them, I have been able to enjoy a lot. It has been a lot of fun. In addition, there has been a bit of everything, with stone paths and valley changes. I am happy with the navigation because several pilots have skipped a ‘waypoint’ and I have been able to pass it. I was able to recover from yesterday’s stage. When I finished they told me that Isaac Feliú had an accident. I hope you are good”.

Carlos Sainz he achieved the sixth fastest time of the day in the car category. It has not been a bad day for him, although he has had to deal with a new puncture: “At the beginning it was a great plain. We have gotten a bit confused and I had to go back to a ‘waypoint’. There we have lost a minute or so. Then we managed to recover something. But just before neutralization we had a slow puncture. We have already seen the pressure drop again. Lategan has passed us, I have caught him, I have gone after the dust until a small cord of dunes has arrived, where I have been able to pass and recover time. This wheel is developed for the buggy, with 1,600 kilos of weight. This car weighs 2,200 kilos empty. I think we are suffering a little. We must work towards the future ».

Nani Rome He was satisfied with the result obtained after reaching the goal. He finished the stage in the top ten of the day, just 4 minutes and 19 seconds behind the time set by Giniel De Villiers: «It was a good day. This morning we had a lot of cars in front of us, so there was a lot of dust, but we decided to increase the speed and give it a try without risking too muchSo today was fantastic, as the second part was also much better for my driving; it worked very well. We have a good starting position for tomorrow, as We’re not too far from Sébastien Loeb to give you confidence if you need it. Alex was suffering a bit in the other seat after he injured his rib the other day, but today we did well.

Carlos Checa keep living the experience without keeping anything. Today he achieved a good result, finishing in twenty-seventh position just over 14 minutes from the best time of the day: «Good stage, but we have not left anything of the car. The front, we have a crack, the mirror is missing. We have tightened the seams. The team is already reviewing the car and ready to give it all tomorrow again. We are squeezing everything we can. Tomorrow we will try to repeat today’s performance. We have gone far behind, we had dust from trucks and other vehicles. That has deprived us of being able to hunt down other cars in some sectors. There has been a ‘waypoint’ that we have not validated, but we have returned immediately and we have found it. Luckily we haven’t lost anything. Pretty good stage. We are satisfied with today.

Maximum equality in motorcycles and Toyota triplet in the ninth special

Laia sanz He also continues to live the experience and reap interesting results day after day. Once again he has found himself among the thirty best riders of the stage: «Today has been a very fast stage. In the first part it was full of stones, so you had to be very careful not to puncture and damage the car. I think we did quite well and we did what we had to do. Later, in the last part of the stage, especially after refueling, it was all about stepping on the gas without much driving, so there was nothing to do against the other cars. I think we play smart, we are well positioned in the general classification, so we have to keep this up until the last day».