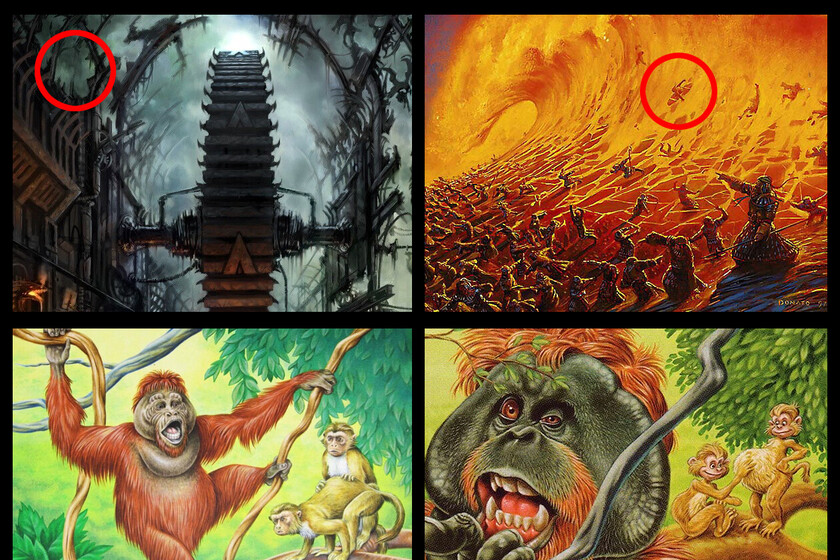 Stories that twist and recall over the years, letters that come together to shape spectacular images, hidden secrets only visible to those with a magnifying glass in hand … Today we look into the well of easter egg from Magic: The Gathering.

Today’s Magic Chronicles might as well be called The 1001 easter eggs from Magic: The Gathering, but actually I think even with that number we would fall short. There are so many examples and they are all so good that choosing which ones will appear here has taken me almost as long as preparing this week’s text. Do you want to know them?

Some toads with a curious appetite

We started hand in hand with Innistrad: Scarlet Engagement, which in addition to being already available in Magic Arena, this week hits stores in physical format. Among all the cards that you can get if you go to one of the special events that take place around the globe (in this Map you can see if there are any stores nearby that you can attend), one of the most interesting is going to be Grolnok, the Omnivore.

A toad that once again proves that the amphibians of the world of Magic they have a special appetite for human flesh. The arms already such.

One of my favorite art resources Magic they are the cards that come together to shape larger images or panoramic landscapes. Those that are made with the land in many editions are usually a delight.

The ones you have below are just one of the many examples that you can find. Of course, without a doubt one of the most curious because, unlike normal, here landscapes are used by joining different combinations of colors.

But it does not end there, especially if it is a collection with greater creative freedom such as those of One set , where they have already shown on many occasions that mounting a giant poster based on joining letters is a great idea for those who want to decorate the room with a special scroll.

Another example of cards that are used to shape something bigger is in the two examples that you have below. Images of a much broader art that are used in different cards. Difficult to find the reference directly, but depending on how you place them there is no doubt of their relationship.

Another union that is quite cool but is somewhat more complex to decipher is that of the cartridges. Five cartridges, one for each color, which, when placed in the correct circle, form a pendant that ties the different elements of Magic: The Gathering.

Read:  Monster Hunter Rise has made a decision regarding cross-save and play between PC and Switch, and it is not what we wanted

Art to look with a magnifying glass

It would probably take months of scrutiny to end up finding all the hidden references that are in the images that adorn the images. magic cards, but luckily some are easier to find than others. Like this ghost chasing a Pac-Man, for example.

Or this surfer who takes advantage of a wave of lava about to scorch an entire army alive to score some tricks. Maybe he could have looked for another less macabre time to practice his favorite sport, but hey, here we come to enjoy, not to judge anyone.

Stories beyond the letters (and the issues)

Another of my favorite Easter eggs is when letters with no apparent relationship end up telling a story within the same or even different editions. The examples that you have below give a good account of how the history of Magic it is counted letter by letter.

When the users are the ones that provoke the stories

Probably one of the most famous Easter eggs in the history of Magic is that of Uktabi Orangutan. The point is that the drawing of the letter raised some suspicions about what the two monkeys that appear in the background were doing.

Far from draining the bundle, in Magic They embraced the meme and took advantage of one of their Un-Set to continue telling the story and, incidentally, agree with the ill-thought-out players. A soap opera told with two letters and with a happy ending.

Your face is familiar to me

That some characters appear in different letters in a recognizable way is not strange, after all, the lore of Magic invites us to recover certain elements to narrate the plot letter by letter, but let’s say that some walk through the cards with one more point … funny?

But the most famous of the returns goes to the mythical Fblthp, the Lost, undoubtedly one of the ugliest and most sympathetic creatures in the multiverse of Magic: The Gathering. So lost is the bug that it goes from collection to collection, sometimes hidden in a crowd or crouched in a dark corner, looking for what the hell to do with its life.

We close with another of those stories that, motivated by the community itself, become a classic of Magic that the artists and creatives of Wizards of the Coast they are in charge of taking advantage of. As a chetadísima letter, it ends up being known as Superman among the players and, to honor the name, a creature is given whose name is an anagram of that very thing: Pemmin’s Aura = I’m Superman. Well, that and a handful of other cards of the same style, of course.