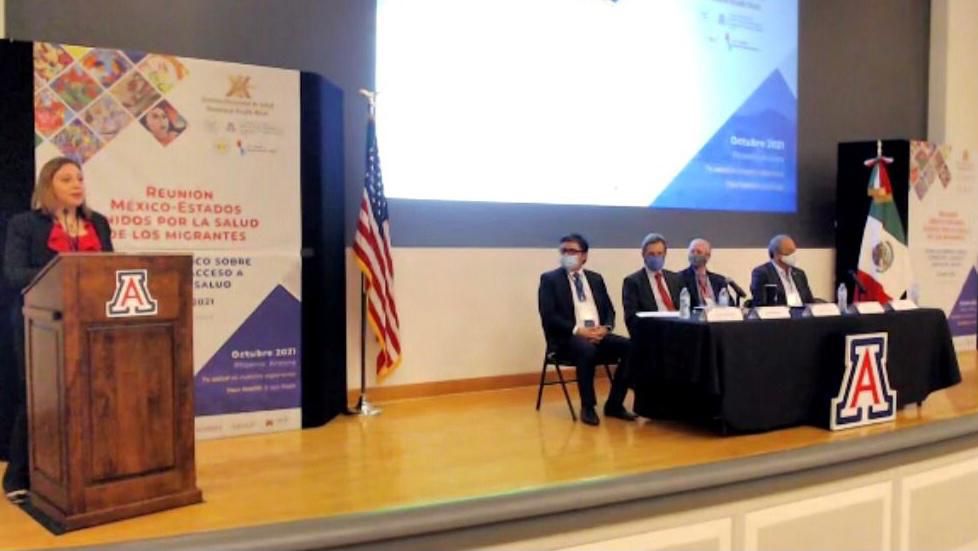 LaSalud.mx.- The Ministry of Health and the Ministry of Foreign Relations (SRE), with the support of community organizations, federal and state agencies and volunteers, carry out the Binational Health Week 2021 during the month of October. It includes various activities to promote and promote the health of the Hispanic / Mexican migrant population living in the United States.

In this context, on October 13 and 14 the Mexico-United States Meeting for the Health of Migrants at the University of Arizona.

There was also the participation of the person in charge of the office of the General Directorate of International Relations of the Ministry of Health, Martha Leticia Caballero Abraham, and the director of the Institute of Mexicans Abroad (IME), Luis Gutierrez Reyes.

As part of the event’s activities, the meeting of the United States-Mexico Border Health Commission, a binational body created in July 2000, took place at the university facilities. the Mexican Ambassador to the United States, the Director of the IME and the President of the University of Arizona, Robert C. Robbins.

Likewise, the National Coordination of the Ventanillas de Salud (VDS) Strategy was relaunched, which was housed in New York and will now be located at the Mexican Consulate in Phoenix, Arizona.

The Ventanillas de Salud strategy is a collaborative effort between the Ministry of Health and the Ministry of Foreign Relations, implemented through the support of the consular network. Its purpose is to facilitate access to health services for the Mexican migrant community and contribute to the generation of a culture of self-care to promote the prevention and control of diseases, through comprehensive preventive care services and culturally appropriate information.

In 2003, the strategy was implemented as a pilot project at the Mexican consulates in San Diego and Los Angeles. In 2004, the federal government formally initiated the strategy with expansion to other consulates. There are currently 49 Health Windows in the Mexican Consular Network in the United States and two mobile windows.

On October 13 and 14, the academic forum will be held, consisting of three panels related to the impact and response to the COVID-19 pandemic and access to health services for the population living in the United States.

In them, there will be the participation of specialists in health issues, such as the person in charge of the General Directorate of International Relations of the Ministry of Health and the director of the IMM, as well as academics from Mexico and the United States.

Binational Health Week is held annually during the month of October in practically the entire American Union, where fairs, courses and workshops are organized to bring the migrant population closer to health services through orientation on disease prevention and promotion of health.

The activities include the timely detection of conditions through the measurement of glucose levels, blood pressure and body mass index. HIV tests, eye exams, dental check-ups and physical activation sessions also apply. At the same time, guidance and information is provided on incorporation into social security and the application of vaccines.

These activities are carried out with the support of the Mexican Consular Network in the United States, Health Windows, fiscal agencies, Civil Society Organizations (OSC), municipal and local governments, universities, public hospitals and community centers.