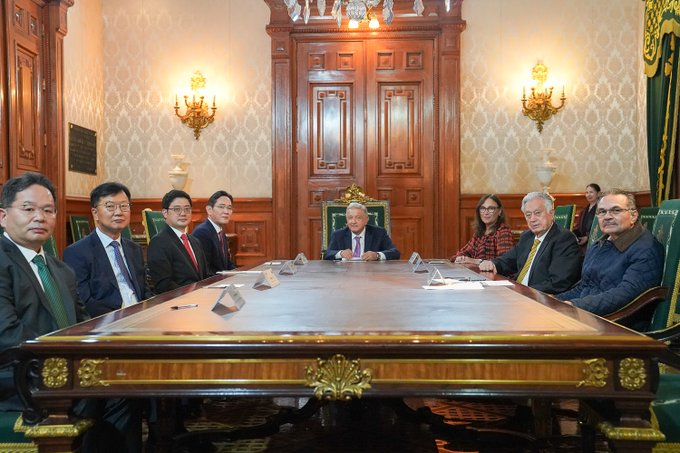 The relationships between the governments of the world and the brands, especially those that are dedicated to the technological sector, have always existed. This Thursday the president of Mexico, Andrés Manuel López Obrador (AMLO) announced that he met with senior executives of Samsung, to discuss issues on construction projects, energy and telecommunications.

The AMLO government has been very controversial in its speech against private enterprise, but that has not stopped it from making agreements and working hand in hand with many important brands in the world and the country.

Meeting between AMLO and Samsung

Through his account on the social network Twitter, the Mexican president shared the image of the meeting with the top executives of the South Korean technology company, Samsung.

In the same message, the president stressed that there are “good relations” with the South Korean company, which, according to data from StatCounter, in 2022, it will position itself as the manufacturer of smartphones which obtained the largest market share in Mexico.

At the meeting, held at the National Palace, they were also accompanying the Chief Executive, the Secretary of Energy, Rocio Nahle, and the CEOs of Petróleos Mexicanos, Octavio Romero Oropeza, and the Federal Electricity Commission, Manuel Bartlett.

Read:  Samsung announced that it will start production of the first generation of 3 nanometer chips

López Obrador also said that the talks were about construction, energy and telecommunications projects, which is easy to see given the business, electronics and engineering profiles of those invited to the meeting.

At the moment there are no more details about the meeting. But it is worth mentioning that Lee Jae Yong, vice president of Samsung, has been multiple accused of bribery and was sentenced to two and a half years in prison in 2021. According to Bloomberg, he was jailed in 2018 on bribery and corruption charges, and was later released with a reduced sentence, with the Supreme Court ordering a new trial.

In this sense, these efforts of the Mexican government are to continue the economic recovery strategy focused on the dispersion of resources to strengthen popular consumption and promote small and micro-enterprises.

Samsung confirms hack to its server; user data at risk

Samsung will no longer include charger or USB cables in smartphones