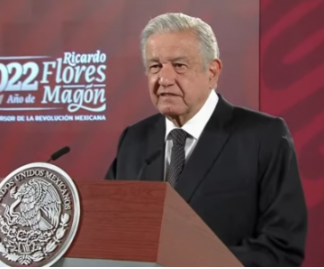 Today, during the press conference “La Mañanera”, President Andrés Manuel López Obrador (AMLO)lashed out at him National Fund for the Promotion of Tourism (Fonatur) and against the former president, Vicente Fox Quesada, because they allegedly influenced the privatization of complexes, highways, and other airports; Thus, he justified the decision that the Secretary of Defense (Sedena) take charge of large projects Fourth Transformation (4T).

The president was questioned about the works carried out in the 4T and the competition of the airports in it. However, he took the opportunity to talk about the decision to give up the Felipe Angeles International Airport (AIFA) and other great works of his government to the Sedena and the company Olmec-Maya-Mexicathe corporation that is going to manage these projects, ignoring the presence of Fonatur.

Why with the Defense? Because we are doing all this with the public budget, it is not debt, with what is being saved by not allowing corruption, with austerity. For those who do not have all the information, I remind you: when the wise decision is made, the people, because it was a consultation not to continue with the airport in Lake Texcoco”.

“It was a very strong decision because they had already committed contracts for 100 billion pesos, and since they knew that we were in agreement with that work, among other issues due to the subsidence that we have already shown, it is the area with the most subsidence in the Valle de Mexico. They chose the worst place. Because the purpose was not to guarantee the quality of the airport, the purpose was to keep the land of the current airport in Mexico City with 600 hectares and make a Santa Fe-type real estate development.

The president explained that these decisions, which went against what his government promoted, cost much more than they should have cost, pointing to the example of the Toluca Train to Mexico City, whose cost rose from 30 billion to 90 billion.

Read:  FIFA 23 sets a new record and thus says goodbye to an era

However, he assured that the austerity efforts and the cancellation of the Texcoco Airport allowed only 100,000 pesos to be paid, for which the cost of Felipe Ángeles was 75 thousand.

“We saved ourselves from the estimated 125 billion pesos, that was the savings, that is what allows us to finance part of the Mayan Train“.

Finally, the President attacked the tourism institution, assuring that during the government of Vicente Fox many highways, airports, banks and mines were privatized, therefore, from his perspective, the most competent institution is the Sedena:

“So, who can guarantee that these assets of the nation are taken care of? Well, an institution like the Secretary of Defense. It is not only because they are acting fairly, professionally, honestly. It is okay to leave these works to a strong institution.”

“Because Fonatur, do you know what they did with Fox? In Cancún they sold land five minutes from the current Cancún airport, which by the way is under concession, it is private. Well, seven pesos per square meter. Not what a meter of carpet costs. Percent, Mangroves, and no pseudo-environmentalist appeared. So, how are we going to leave it to Fonatur? He can’t stand the first hint or the first cannon shot. So, we have to take care of all this that belongs to the nation, that belongs to Mexicans. It is a blessing ”, he concluded.

Let us remember that constructions such as the Mayan Train or the AIFA itself have cost 150 percent and 23 percent more than what was initially raised by the current administration.

Limitations on “propaganda” and LGBT+ advertising; Qatar, Russia and other cases

Interview with Teads: “The communication experience will change the industry”

“The master of perreo”; uses reggaeton to encourage a student

Oxxo cashier action enchants a loyal customer; he offers her his “aPollo”