Accuses ex of subscribing to his OnlyFans; does not pay child support 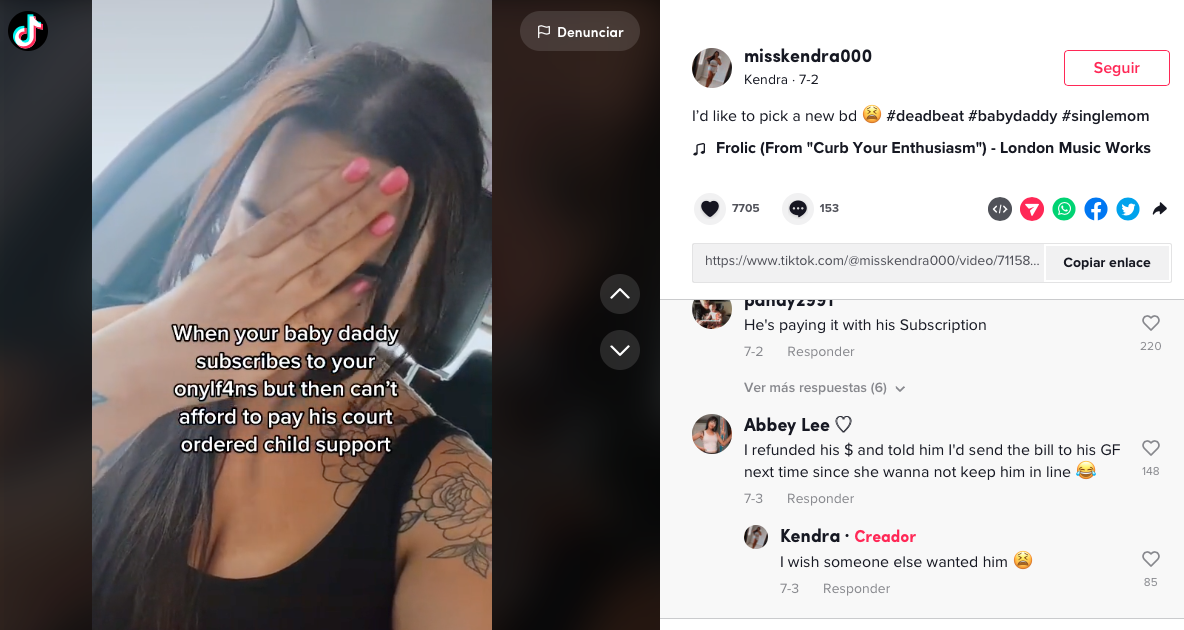 Social networks have become the best communication tool for people, regardless of whether they talk in real life or not. This is the case of a mother who accused her ex-partner and father of her daughter in a Tiktok video of subscribing to her OnlyFans account but not paying child support.

Onlyfans is the social network that has become popular in recent months, where a million young people from all over the world are sharing content in exchange for money.

Data from the same platform indicates that it has existed since 2016, which is why it registers a million users around the world and has become the best tool to generate money for many people. According to a study conducted by Semrush, United States is the country that registers the most users of the digital platform, where in January 2022 they accumulated approximately 248 million visits to the website of adult content creators.

This is followed by the United Kingdom as the second country that registers 23.5 million visits on the photo and video sharing platform; While the users of Canada and the Netherlands accumulated around 13. million and 6.5 million visits to the website.

Through a viral video on the TikTok social network, the mother, who identifies herself with the account @misskendra000, reveals that her ex-partner follows her on her OnlyFans account, but does not pay her daughter’s expenses.

“When the father of your baby signs up for your OnlyFans account, but does not have money to offer him support according to the court,” said the woman in the video with which she revealed the unusual situation she is experiencing.

The Canadian woman explains that initially she wanted her ex-partner to assume shared responsibility with her daughter, but finally he did not succeed, since the court of his country considered that the man did not have money to support a baby.

It is worth mentioning that when a couple separates and has children, financial support must be established. According to Cornell Law School, “Child support is the continuing financial obligation to ensure the well-being of children born to a relationship or marriage that no longer exists. It usually results from a divorce, separation, or annulment, where custody of the children is assigned to one parent or both parents share custody. Most likely, the non-custodial parent is required to provide financial support.”

Returning to the story, the Canadian mother assures in her recording on the video social network that she already has more than 7 thousand likes that thanks to the fact that her partner does not pay her child support she had to do the impossible to generate money and be able to give her a good quality of life for her daughter. This is how Kendra came to OnlyFans, the famous platform for adults that works through paid subscriptions.

He also explains that he realized that his ex-partner is subscribed to his account, since one day he entered his profile to see the new followers, when he saw the father of his baby among those men.

Before the exhibition, Internet users divided their opinions on the problem, where many supported it, and others, who believe that it is the same to pay for the subscription than for maintenance.

“You are paying for it with your subscription,” says one of the comments.

“Wouldn’t I be technically paying for it anyway?” added another netizen.

“Oh my gosh I felt this in my soul,” another comment reads.

It is not the first time that a story around OnlyFans has gone viral on networks, as we remember that it has been a topic in recent months, where even pregnant women sell images of their bellies to their loyal fans.

And this is how social networks have become one of the most important channels for both artists and ordinary people who see it as an ideal channel for work and creativity.

Twitter will cancel plans to compete with OnlyFans for this reason