Bullfrag
Home Entertainment What If …? check that Killmonger is the MCU’s most dangerous... 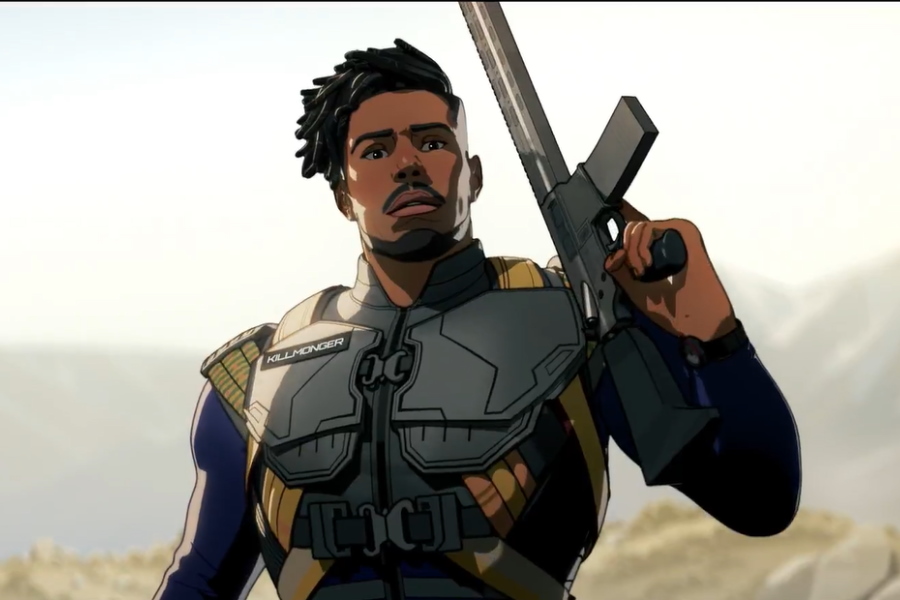 Facebook
Twitter
Pinterest
WhatsApp
Index hide
1 Erik Killmonger returned to the new episode of What If…? making it clear that Killmonger is a dangerous villain in the Marvel Cinematic Universe.
2 The Hand That Rocks the Cradle
3 Is the friend of my enemy my friend?
4 Learn more about Wakanda and Black Panther at SMASH and Marvel Comics México
5 It is also being read

Erik Killmonger returned to the new episode of What If…? making it clear that Killmonger is a dangerous villain in the Marvel Cinematic Universe.

In the Marvel Cinematic Universe, evil knows no bounds, especially with a villain who proved that his ambition leads him to hatch ingenious plans to take control of Stark Industries and Wakanda, Erik Killmonger.

Do not miss: Killmonger returns to the sixth episode of What If…?

If you remember in the movie Black Panther, Killmonger is the son of N’Jobu, brother of King T’Chaka and cousin of T’Challa, who takes the throne of Wakanda and the mantle of Black Panther, after beating him in a challenge to dead.

T’challa manages to recover, and after a spectacular battle throughout Wakanda, manages to defeat and finish off Killmonger, who planned to use Wakandan weaponry to go to war and defeat nations like the United States.

In the sixth chapter of the Marvel studios animated series, What If…? We find a Killmonger who saves Tony Stark from being kidnapped by the Organization of the Ten Rings, and earning the trust of the millionaire, who would ultimately no longer become Iron Man.

The Hand That Rocks the Cradle

Killmonger reveals Obadiah Stane’s plans to assassinate Tony Stark, so the Wakandan begins to climb the Stark Industries organization chart, accessing Stark’s most advanced technology, as well as large budgets, to suggest use. of vibranium as a source of energy.

The villain manages to confront the United States and Wakanda for the use of vibranium, without discovering himself as a double agent, something that T’Challa discovers, but fails to prevent his cousin from murdering him, as well as James Rhodes, which further tends the spirits between Americans and Wakandians.

With the drums of war beating on both fronts, Tony Stark seeks to avenge the death of James Rhodes, but in the process of dueling he discovers the betrayal of Killmonger, who does not hesitate to kill his “friend”, making this crime seem an act of war from Wakanda.

Read:  The villains confirmed for Phase 4 of the MCU

Is the friend of my enemy my friend?

But this was not enough for Killmonger, who also takes out Ulysses Klaw and helps the Wakandan troops take down an attack from the United States, prompting T’Chaka to name Killmonger the new Black Panther, and the villain in home.

Killmonger has access to the great war advances on both sides, so his plan came out to order, something that Aldrich Gillian sought in Iron Man 3 when he wanted to control global terrorism, to have the favors of the government of President Ellis.

The sixth episode of What If…? makes it clear that Killmonger is one of the most complete villains that the Marvel Cinematic Universe can have, since not only does it have a similar purpose to Loki or Thanos, its plans include both the execution of the plan as well as its consequences, which has coldly calculated.

The animated series What If…? It is now available on the Disney + digital platform.

Don’t miss: What If…? presents a look at the remainder of its first season

Wakanda is located in the depths of Africa, it is a mysterious, technologically advanced and powerful civilization. For the past ten centuries, it has remained an unconquerable territory, inhabited by invincible warriors.

Leading this nation is a line of warrior kings endowed with increased speed, strength, and agility. T’Challa is the most recent and current heir to this legendary dynasty, the great hero known to the world as Black Panther.

SMASH and Marvel Comics Mexico bring you Marvel Deluxe – Black Panther: Who is Black Panther ?, a story by Reginald Hudlin with the traces of John Romita Jr. that you cannot miss