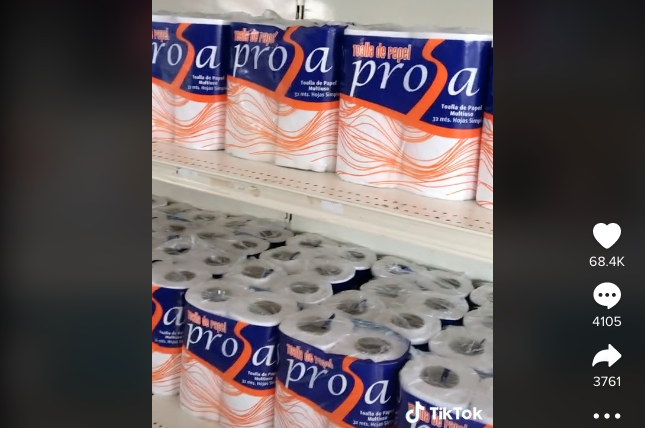 Through your TikTok account, a user shows how supermarkets are currently in Cuba and the response of Internet users has surprised.

In the so-called “era of hyper-consumption”, today, people have a wide variety of options to make their purchases.

In Mexico, the most important retail stores for the Mexican consumer They are Walmart in the first place and with 2,571 stores; in second Soriana with 810 stores; Chedraui commercial group with 306 stores; and La Comer with 71 stores.

Of course, this speaks of the great importance that stores or supermarkets have had for consumers, both in Mexico and in various parts of the world.

According to data from Shopper Experience Observatory of in-Store Media Mexico, it was concluded that the average expenditure of Mexicans in a supermarket is around 2 thousand 708 pesos per monthwhere the most visited aisles are the food aisles, with 88 percent in groceries, 64 percent in dairy products, 47 percent in cereals and cookies in 34 percent.

Under this framework, we are talking about a context in which, for the consumer, supermarkets offer a fairly extensive shopping experience, a fact that has been reinforced since the stores began to reopen their doors after the health emergency.

Index hide
1 This is how supermarkets are in Cuba
2 Now read:

This is how supermarkets are in Cuba

Now, in Cuba, a content creator has decided to show, through a video published on TikTok, what the consumer experience is like in supermarkets in that country.

As is well known, in the Cuban economy, companies belong to the state and not to the private sector, and business objectives are specified and planned. In that country, the Government is the one that fixes the prices; however, since 2010 several economic reforms and relaxation of regulations have been carried out.

Read:  Uber and FBI join the investigation after the Rockstar Games hack

From this perspective, and taking into account the information from the Shopper Experience Observatory of in-Store Media Mexicothe consumption habits of Cubans are different from the habits of Mexicans.

For those who didn’t see it on my YouTube channel, I’ll leave it here ??| #Cuba #Cubans #cubantiktok #viral #cubanosporelmundo

What has surprised, when seeing the images presented by the tiktoker, is the response of the users, who have decided to make known their opinion regarding the products that are offered in Cuban stores, among other words.

“For those who like socialism”; “Communism only works to make those it controls rich”; “That is socialism and communism… Thanks for sharing friend”; “We are millionaires in my beautiful country, Mexico”; “I cannot understand how the people do nothing to change the government and what is more, they defend them”; are some of the reactions deposited by users.

Today, thanks to social networks, people have an important window to express themselves and, under this framework, create an important bond with each other.

Proof of this is what this Cuban user has done with his videos, making it clear that consumption habits are very different in each country.