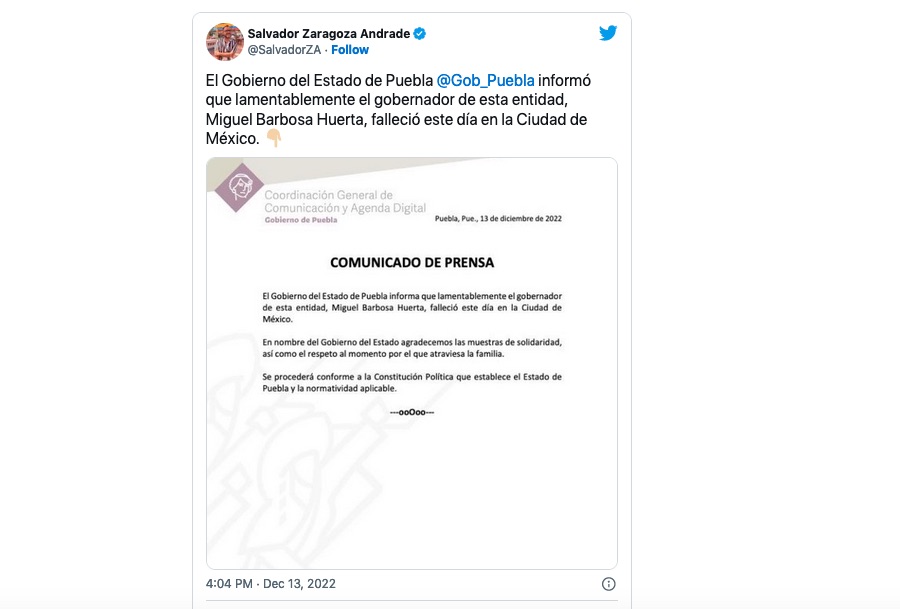 The Government of Puebla reported that Miguel Barbosa passed away on December 13 in Mexico City, so the entity is again left without a state executive, as we remember that in 2018 the death of Martha Erika Alonsothen governor of the entity.

Barbosa’s death occurs almost four years after the death of Alonso and her husband Rafael Moreno Valle, after an accident that occurred on December 24, 2018.

These unfortunate events have motivated an intense conversation on social networks, where the work of Barbosa, who was a member of Morena, the party of the current president of Mexico, Andrés Manuel López Obrador, has been reported.

If we look at the vital statistics of the INEGI, they show that the main causes of death in the state of Puebla are heart diseases, which have registered up to 15,000 deaths; COVID-19, more than 13 thousand deaths; diabetes, 10 thousand deaths; influenza and pneumonia, four thousand; malignant tumors, 3,900 and liver diseases, 3,300 deaths.

Read:  Does the Low Season still exist in tourism?

With the warning that it will proceed in accordance with the Constitution, the government of Puebla reported through its communication office that Barbosa died in Mexico City, for which, on behalf of the government, the expressions of solidarity towards the deceased were appreciated. political.

Barbosa’s death is added to the death of Moreno Valle on December 24, 2018, so almost four years after the loss of the PAN governor, the entity is left without an executive again.

After Barbosa’s death, which was reportedly due to his state of health, when he was treated by medical personnel in the country’s capital, the president expressed his condolences on social networks.

“I am very sorry for the death of my colleague Miguel Barbosa Huerta, governor of the state of Puebla. I just spoke with his wife Rosario, I expressed my sadness and I extend my deepest condolences to his family, friends and his people, ”he published.

The Government of the State of Puebla @Gob_Puebla reported that unfortunately the governor of this entity, Miguel Barbosa Huerta, passed away this day in Mexico City. 👇🏼 pic.twitter.com/LIqgnWcVLp

Regarding the accident involving Martha Erika Alonso and Rafael Moreno Valle where they lost their lives, Miguel Barbosa pointed out that it was a “punishment from God” because they had stolen his election 👇🏼 pic.twitter.com/QsbAoIhWdA