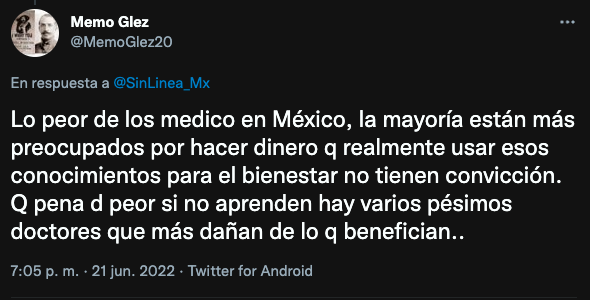 Daily patient care is not a simple activity. To get to this point requires extensive academic preparation. It is also essential to provide adequate time and service to each visitor to the office. But in the end, regardless of the humanitarian attitude, it cannot be ignored that the doctors should make money.

In no way is it a negative aspect because it is the goal of all people. In the end, the financial part is necessary to survive. Otherwise, there would be no resources to purchase any product or service.

The humanitarian part of Medicine

In this sense, to date there is misconception that empathy and charging for a service can never go hand in hand. In reality they are compatible and especially within the field of health you must have both.

All of this comes to mind a social media post summarizing the thinking of thousands of patients. It is about a user who accuses that doctors are more interested in making money instead of really using their knowledge for the common welfare.

The worst of the doctors in Mexico, most are more concerned with making money than really using that knowledge for well-being, they have no conviction. What a worse shame if they don’t learn there are several lousy doctors who do more harm than good..

His comment was made as a result of the recent National Convocation of Specialists of the Federal Government. Although the initiative had good intentions, in the end it was a failure because it did not achieve the expected results.

Read:  Ubisoft would be making a sequel to Immortals Fenyx Rising

Doctors are not interested in working in rural areas

Everything is summed up in that it was not possible to capture the attention of the doctors to be part of this registry. In total, 13,765 positions were created for specialists throughout the country. The problem is that only 63.9% of the places received an application.

Due to the above, the user complained that there are job opportunities, but doctors prefer to make money in the private sector instead of joining this initiative that seeks to send aid to rural areas.

On the other hand, beyond the economic factor, from the beginning there were several criticisms made by health professionals to this initiative. One of the main ones points out that the problem is not the lack of job opportunities but rather insecurity.

During the last years there have been constant reports of attacks, aggressions and even murders of doctors and nurses in rural areas. In these types of places, health professionals are defenseless and forgotten.

Similarly, some have criticized the conditions of hospitals and clinics in communities located outside of large cities. Most do not have basic supplies for specialists to do their jobs. Therefore, it is of little help to have medical personnel if the units lack the minimum instruments to care for patients.