These 5 drugs were counterfeit

By NicolasDecember 14, 2021No Comments4 Mins Read 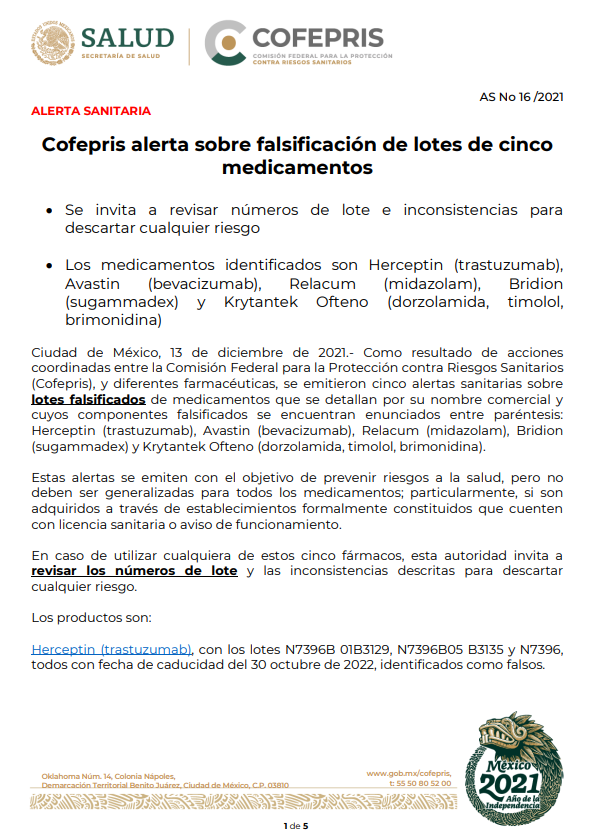 The pharmaceutical industry is one of the most important in the world, although it is also one of the most under attack. The clearest sample can be seen in counterfeit drugs and their multiple consequences. Not only is it a serious crime but it also puts people’s integrity at risk. To date, it is estimated that this bad practice causes a million deaths each year.

But although you may think that this does not happen in Mexico, in reality it is not like that. As a result of coordinated actions between the Federal Commission for the Protection against Sanitary Risks (Cofepris) and different pharmaceutical companies, five sanitary alerts were issued. All are from counterfeit batches of drugs that are listed by their brand name and whose apocryphal components are listed in parentheses: Herceptin (trastuzumab), Avastin (bevacizumab), Relacum (midazolam), Bridion (sugammadex) and Krytantek Ofteno (dorzolamide, timolol , brimonidine).

These alerts are issued with the aim of preventing health risks, but should not be generalized for all drugs. Especially if they are acquired through formally established establishments that have a health license or operating notice.

In case of using any of these five drugs, this authority invites you to review the lot numbers and inconsistencies described to rule out any risk.

They present anomalies in their primary packaging, such as a removable lid with stains and irregularities in the internal contour of the cap; the label of lot number N7396 is missing the legend “injectable”; and the text describing the route of administration does not correspond to the one authorized for the product, as you can see:

Avastin (bevacizumab), was also falsified in its presentation of 400 milligrams (mg) / 16 milliliters (mL). It presents inconsistencies in the packaging, since the bottle shows the batch number B96896, which is different from the one presented on the box: B9689B098.

The expiration date has expired and the illustration on the box does not correspond to the one authorized by this commission, since it does not have a security label or a packaging material code, and two black lines were placed below the purple band, as shown. next:

When they are real, these two drugs are cancer treatments prepared by Productos Roche, SA de CV, who presented evidence to this health authority to identify the falsification.

The third counterfeit product detected was Relacum (midazolam), from Laboratorios PISA SA de CV. In this case, batches B20J424 and B15U661 have a tampered expiration date, so they represent a risk to the health of those who use it; its secondary packaging was also unknown to the manufacturer.

Schering Plow SA de CV and Merck Sharp & Dohme, Comercializadora, S. de RL de CV, also presented evidence of the falsification of the drug Bridion (sugammadex). In this case, the indicated batches are S003793 and S029318, in the solution presentation, box with 10 vials of 2 ml.

The fake product has poor adhesion and has excess tabs on the label; the batch number is blurred as well as the expiration date, which was manipulated; and the cap has irregularities in the internal contour of the bushing.

Presents modification in the colors of the secondary packaging; for example, purple in the triangles located above the letter T and black in the code; the pointer has a pointed end; the formula’s typeface has dashes and symbology that should represent a pregnant woman, but has a slim figure. As can be seen in the image, the bottle has a bond line, which does not exist in the original product.

In case of identifying the batch numbers mentioned or the inconsistencies indicated, Cofepris recommends immediately suspending the use of false products and making a health complaint through this link.