The water footprint of food 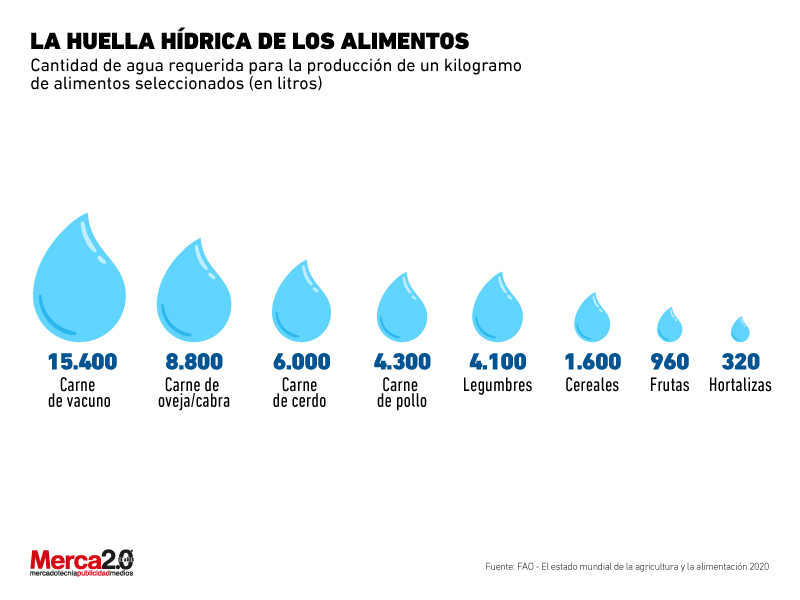 Little is said or known about the water footprint, the environmental indicator that measures the amount of fresh water used, in this case, by food.

It is true: the consumer is changing, motivated by the great social and ecological changes in the world; In many ways, there is a new look at consumer habits.

A recent survey reveals that 2 out of 3 consumers are willing to pay more for a product from sustainable brands, a trend that has been increasing, especially among the younger generations.

Based on this premise, the problem of water scarcity has been an alert in various parts of the world for years, which is why all kinds of campaigns have been carried out in order to call on the world population to take care of this vital liquid. .

To date, according to the data presented in the 2020 Ecological Threat RegisterSome 2.6 billion people around the world live in countries that are most at risk of running out of water, which is why, even by 2040, this figure could rise to 5.4 billion.

The situation for our country becomes even more alarming, since said report also details that, in the Latin American region, Mexico and Chile are the countries with the greatest risk of running out of water.

On the other hand, according to information from the UNICEF, worldwide there are more than 1.42 billion people living in areas where water vulnerability is high or extremely high. Of this figure, 450 million children are accounted for. This means that 1 in 5 children lacks enough water to meet their basic needs.

Read:  This is an advertising campaign, for the consumer after confinement

The water footprint of food

The study “The State of Food and Agriculture 2020”, carried out by the Food and Agriculture Organization of the United Nations (FAO)), reveals which are the foods that bring with them a much higher use of water, that is, their water footprint is larger compared to vegetables.

As the graph deposited above indicates, for the production of a kilogram of beef or beef, up to 15,400 liters of fresh water are needed, this being the least sustainable meat food in terms of the use of the vital liquid.

Sheep meat, pork meat and chicken meat are, in the same way, some of the foods that leave an unsustainable water footprint, since they require 8,800, 6,000 and 4,300 liters of water respectively for each kilogram.

Fruits and vegetables are located on the opposite side of the scale, since they need 960 and 320 liters of water to produce just one kilogram.