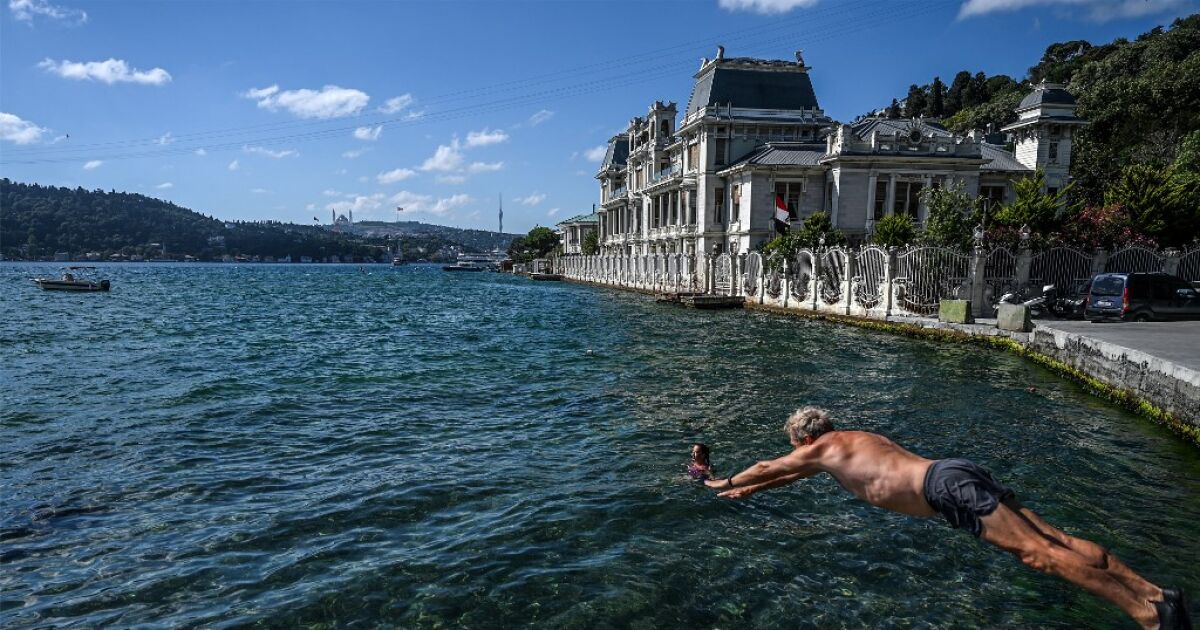 “In the old days, you could get to the water from anywhere,” recalls Cakmakci. “Now, of course, there are constructions everywhere, the coasts have changed. Now we live on top of each other.”

The Istanbul authorities added another 100 to this beach, which now has about 300, in addition to 170 umbrellas.details Sezgin Kocak, maintenance manager, who has spent his childhood in this increasingly crowded arena.

This is a consequence of the economic crisis, which is hitting Turkey hard, with inflation close to 80%.

“Many people can no longer leave Istanbul,” says Canan Civan, a dyed sixty-year-old who wears a bikini. “But even if I had money, I wouldn’t go anywhere else,” she says. “Instead of spending ten days on vacation, I prefer to come here every day for three months.”

“I feel free, I arrive, I settle in, I put myself in the sun. It is ideal. I can even bring my food“, bill.

Istanbul has 85 beaches or sea accesses between the Black Sea to the north and the Sea of ​​Marmara to the south, with the Bosphorus corridor between them.

Public or private, some of these beaches attract a traditional clientele, who keep the veil to bathe, and others wear more bikinis, some of them tiny.

But in the image of what Turkish society is, both tend to coexist, although sometimes they are located on one side and the other of an invisible demarcation.

On the bikini side, Eren Bizmi encourages his friends, who are playing a game of volleyball.

“When talking about the sea, people think more of Bodrum“, in the Aegean Sea (west). “But the inhabitants of Istanbul know it well: here we are 35, 40 minutes from the center”, highlights this 32-year-old real estate agent. This is the “most beautiful, less salty” sea , he assures.

Read:  These are the five types of swimming pools that will be a trend in architecture and decoration for this summer

“And I can work at the same time: if a client calls, I’ll have him visit a house, and then I’ll come back,” he explains.

But no one mentions the two sea mines discovered in the area this spring, reflecting a war raging further north between Russia and Ukraine.

The “privilege” of the Bosphorus

Then there are the Bosphorus bathers, and they wouldn’t trade their place for the world. Such is the case of Eren Tör and his group, who meet every morning in Bebek, a neighborhood on the European shore.

This 64-year-old retiree swims “every day of the year, even in winter, even under the snow,” he says while showing images on his phone.

“For me, it is a privilege to bathe in Istanbul, between two seas, between two continents,” in water that averages 23 degrees in summer and 11 in winter.

Almost everyone has learned to swim here, in the waters of the Bosphorus, whose treacherous currents they know, as well as their mood swings.

This is the case of Levent Aksut who, at 92 years old, comes to swim “three to four times a week”.

Nevertheless, “the government doesn’t like to see people in bathing suits“, laments his son Caner, alluding to the Islamoconservative AKP party in power and that, according to him, reduces access sites to the bathroom.

But they maintain their ritual: after bathing, they dry off in the sun and then go to share a coffee. And so, day after day.