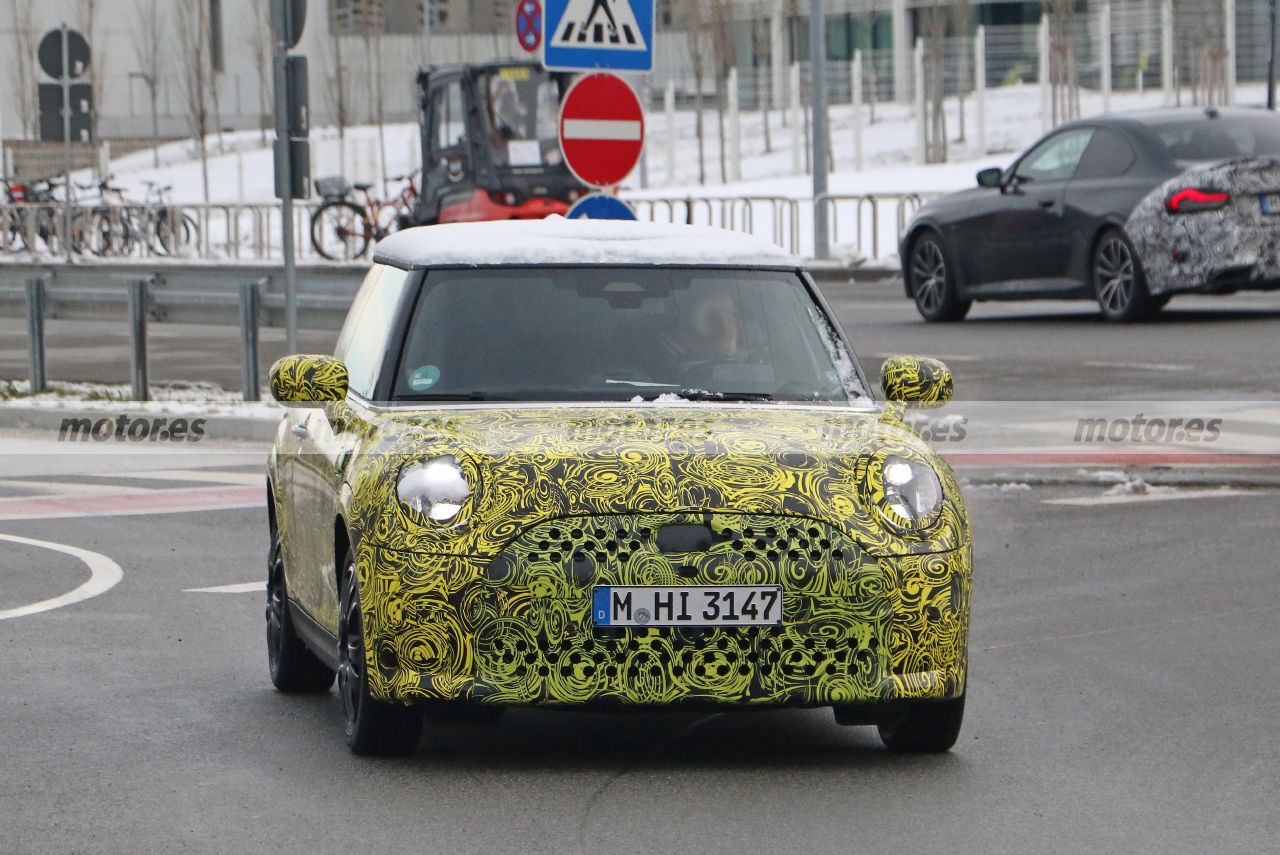 After seeing the new MINI Cooper S Electric completely naked in China, today one of the prototypes of the new three-door model was seen in Germany. A peculiar test unit with details of production and other older ones, which points to a hybrid mule that the brand is using to test different components of the 2023 model.

Just a few days ago we saw the new generation of the MINI Cooper S Electric completely uncovered in far-off China, while today the first mules of the new three-door combustion model appear in the snowy surroundings of BMW’s headquarters in Munich. . The future MINI Hatch has been presented in a curious configuration, since in reality it is about a hybrid mule, with different sections of the new and the still current model.

The spy photos They can deceive you on the eye and remind you of the facelift of the MINI 3 Doors that we saw a few months ago, due to the front configuration and the yellow camouflage, but the truth is that these images show few really new details. Compared to the naked leaked prototype, there’s nothing beyond the new more rectangular rear view mirrors. The headlights are more than camouflaged, disguised with the chrome trim around them, pretending to be larger in diameter, but little else.

Index hide
1 First tests of the MINI 3 Doors 2023
1.1 The new MINI Cooper S Electric that will arrive in 2023 appears naked in China

And is that the angle of inclination of the windshield pillars does not match between this mule and the new leaked model. Even the rear is completely uncovered, revealing the lights and the thin chrome border that defines the sheet metal and the glass surface, something inappropriate for such an early development. What’s more, the taillights are exactly the same as the current model. A series of indications that tip the balance towards technical tests based on the new multi-energy platform.

Read:  Dani Juncadella faces the last DTM round at Norisring with enthusiasm

Inside, the spy photos reveal the new head-up display on the dash, but it is not more clear whether the new interior design of the Cooper S Electric is on board this very early test unit. What we do know is that the intention of the Oxford brand is that there are practically no distinctions between electrical and combustion, sharing exterior and interior style and even the most sophisticated comfort, chassis, safety and connectivity equipment. Because, the future MINI will also do without a large number of buttons and keys.

The new generation of the MINI It will debut in 2023 and will go on sale at the end of that year as a 2024 model.. The range will continue to feature gasoline and diesel engines, three and four cylinders in line and up to 2.0 liters. One of the most important novelties will be in the plane of the propellants, since the German firm will work on a new electrification for smaller blocks. At the same time, the MINIs will simplify the offering. The vast majority of versions will be offered with an 8-speed automatic transmission, the big star, leaving the 6-speed manual practically aside.