The Cathedral of Merida, one of the oldest buildings in Mexico 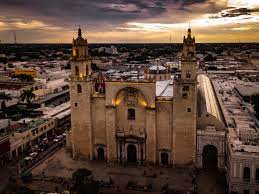 The Merida Cathedral is one of the oldest buildings in Mexico and it also became one of the most attractive tourist sites in the state of Yucatan. Here we tell you his story.

According to the official site, this cathedral was the first to be built in continental America on the mainland. Only the Cathedral of Santo Domingo, located in the heart of Mexico City, is older than that of San Ildefonso.

History of the Cathedral of Mérida

Initially, between 1562 and 1599, a church was built once the Spanish conquerors built their city on the old T’Hó. However, after the authorization of Pope Pius IV, at the request of King Philip II, the church of the Yucatecan capital was erected as a cathedral.

The lifting of the building was in charge of Pedro de Aulestia, but it was Juan Miguel de Agüero who would complete the work.

In the 19th century, during the political instability and looting that the city suffered, several of the treasures and works of art that were kept inside the cathedral were stolen.

In the year 1915, by order of General Salvador Alvarado, the cathedral was looted. In this way it lost its invaluable collection of sacred art: a Walcker organ, built in 1902, as well as Baroque and Churrigueresque altarpieces made between the 17th and 18th centuries.

The Chapel of San José and the Chapel of the Rosary, which were part of the building, were demolished in 1916. This was done with the aim of separating the cathedral from the seat of the Episcopal Palace. Today in that place is the Museum of Contemporary Art.

Read:  Is it illegal to resell Ticketmaster or other tickets in Mexico?

Do you want to escape to Yucatan? Plan your trip here and live an unforgettable experience

It is important to point out that its architecture consists of three naves (one central and two lateral). In addition, it has a pair of two-body towers that have a Moorish style, as well as a dome adorned with a buttress arch.

Its facade is very sober, with a semicircular arch within which the main door is inscribed, flanked by the sculptures of San Pedro and San Pablo. Inside, there is a large space with three naves with coffered vaults and Gothic interlocking.

On the main altar stands out a large image of Christ on the cross, called “the Christ of Unity”, carved in birch and mounted on a mahogany cross; It measures 7.65 m high and was executed in 1965 by the Spanish artist Ramón Lapayese del Río.

Where is the Cathedral of Mérida?

Fall in love with this historic place in the Yucatecan capital and don’t forget to take a selfie in front of its majestic façade.