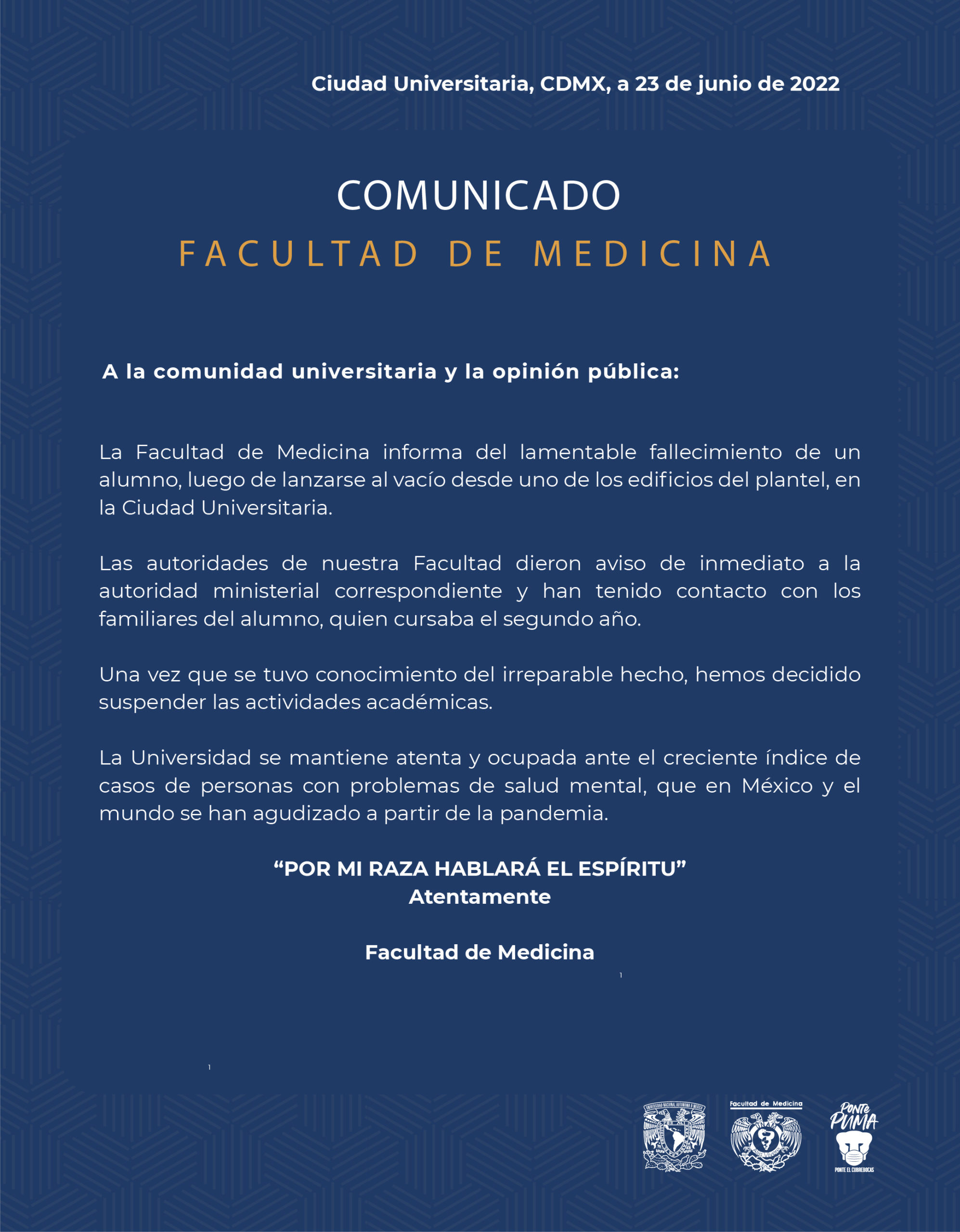 The field of health is one of the most demanding and competitive that exist. Constantly alerts about the conditions faced by young people from the formative part and today sad news was announced. It is about the suicide of a student of the Faculty of Medicine of the National Autonomous University of Mexico (UNAM). The information was released by the authorities themselves.

In the first instance, this serious problem is not exclusive to one country but affects the union throughout the world. For some years, Medicine has become the profession with the highest rate of people who take their own lives. Those who exercise it are even twice as likely to commit this action compared to the rest of the population. In the United States alone, it is reported that between 28 and 40 doctors out of every 100,000 choose this path.

There are many reasons that can lead to an event of this type and usually the combination of several is what triggers suicide. In the first instance are the long working hours that are usual from the training part. This causes high levels of stress and mental fatigue. Although regardless of the circumstances they must be ready to attend to patients.

Within the professional field the demands are even greater. Each doctor is asked to offer consultations of the highest level in the shortest possible time. In the end there is very little time left to enjoy with family or friends. As a consequence, many feel dissatisfied and this leads them to develop suicidal thoughts.

Index hide
1 What happened at the UNAM Faculty of Medicine?
2 Current panorama in Mexico

What happened at the UNAM Faculty of Medicine?

However, with respect to the suicide that occurred at the UNAM School of Medicine, the student’s name was not revealed in order to respect the victim’s family. It was through a statement that the authorities reported what happened.

What is mentioned is that The young man jumped into the void from one of the campus buildings in Ciudad Universitaria. The authorities of the Faculty gave immediate notice to the corresponding ministerial authority and have focused on locating the relatives of the student, who was in the second year.

Once the irreparable fact became known, the Faculty made the decision to suspend academic activities.

The Faculty of Medicine reports: pic.twitter.com/paks72vsla

For its part, UNAM emphasized that it remains attentive and busy in the face of the growing number of cases of people with mental health problems. It is a problem that both in Mexico and the rest of the world has worsened since the pandemic.

On the other hand, there are no official statistics on suicide cases that occur among health professionals in our country. Although an estimate by the Mexiquense Academy of Medicine states that between 96 and 140 are committed each year.

In that sense, some of the factors that favor such a decision are the same as in the United States. In addition, others are also added, such as the low rate of doctors who manage to pass the National Examination of Applicants for Medical Residencies (ENARM) and the low salaries they face in the world of work.

Although beyond the demands, what can never be forgotten is the importance of feeling good in order to help others. The first patient for any doctor is himself. He should never make the mistake of sacrificing his own integrity for that of others because this creates a vicious circle in which everyone is harmed.