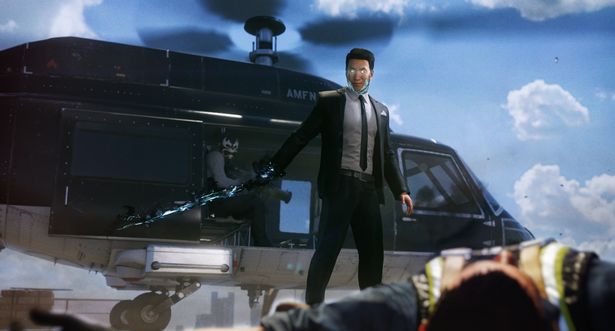 Index hide
1 A rumor would indicate that one of the characters from the video game and the comics, Mister Negative, would join the MCU. Find out all the info In this note!
2 Share it with whoever you want
3 Related Posts

A rumor would indicate that one of the characters from the video game and the comics, Mister Negative, would join the MCU. Find out all the info In this note!

A recent rumor would put the Mister Negative from PS4 Spider-Man video gameat MCU as a future villain of the arachnid superhero. AND Stephen Oyoung, actor who played him in the game, He came out to talk about this rumor to calm down the fans who are waiting for the appearance of this villain.

The first time we met Mister Negative it was in the comic Comic Book Day: The Amazing Spider-Man #1. Was created by Dan Slott and Phil Jimenez, and his origin story is quite interesting. The villain is a gangster chinese mafia and a human trafficker who participated in an experiment as a test subject. This experiment gave him full control over the Dark power and the light force extradimensional, which caused the character to develop dissociative identity disorder. His identities are Mr Positivethe alter ego of Martin Liand Mister Negativehis evil counterpart.

After appearing in two Spider-Man animated series and in a minor role in a game, we finally met as it was due to Mister Negative in the video game Insomniac Games for PS4 Spider Man. In this one, he was the main antagonist after Kingpin was captured. The main mission of the villain was to conquer all the territories that were under the power of Kingpin while seeking revenge on Norman Osbornewho experimented on him when he was young.

Many rumors began to circulate these last days and involved the actor who plays the character in the game, Stephen Oyoung. According to rumours, Mister Negative would become the next villain of the Spider-Man from the MCU. And the actor, after seeing all the rumours, went out to talk about them. “Yes, I am seeing more and more rumors about Spider-Man 4 on-line”, he says tweet of the actor. “All I have to say is, Sony It’s okay if you lost my phone number. send me a DM”. From the actor’s comment, it seems that the rumors are just that, rumors… or that another actor will play his character.

But you can’t really trust the actors who work for Marvel. A clear example is the dear Andrew Garfield, who denied too many times his participation in Spider-Man: No Way Home. Something interesting is that the character of Mister Negative can easily appear in the future of the MCU thanks to the latest movie Tom Holland.

On No Way Home, (eye movie spoilers) we discovered that the aunt may works for charity Food, Emergency Relief, Shelter and Trainingbetter known by its acronym in English as FEAST., which was founded in comics by Martin Li. This leaves an open door for the villain to appear in the MCU, either played by oyoung or by some other actor. To be able to know if that will be the villain of one of the next movies of Tom Holland, We’re going to have to wait a long time. At the moment, it is only known that there will be another superhero trilogy starring Holland, but it is not known when it will take place or what topics it will play.

Sail awnings, the most functional (and decorative) solution to shade your terrace, patio or garden

The storytelling behind the multichannel strategy