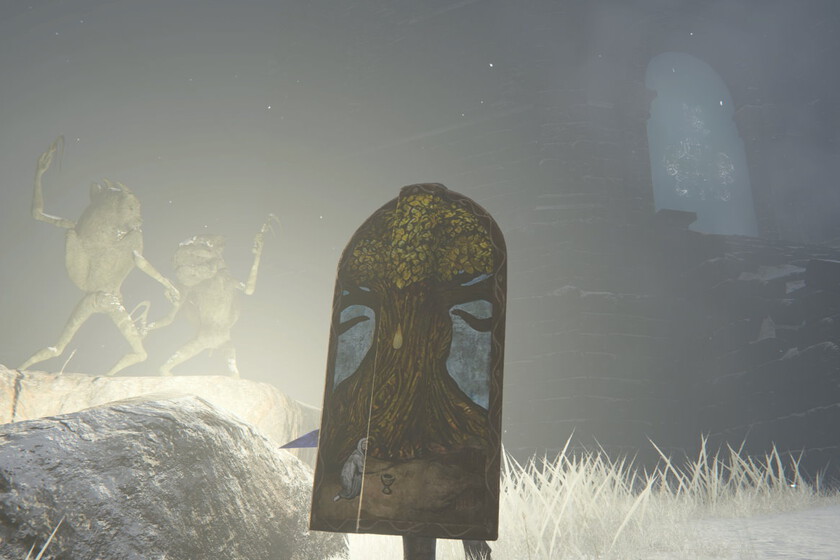 If you were surprised to discover that the great mystery of the tower of heresy in the Elden Ring was the invisible bridge that was hidden behind it, you will most likely be shocked to learn how solve the puzzle of the albináurica tower.

The cryptic clue of the statues with two imps

The puzzle of the albináurica tower is more complex from the outset as it is more cryptic. To the left of the magically blocked door you only see the statues of a couple of imps fighting, while in the back you see another imp that you can fight, but that does not stop resurrecting. It is clear that this is responsible for the door to open, but it doesn’t matter what you do, he keeps coming back to life and the door is blocked. Because the solution is in Liurniaeye.

Specifically, at the north end of Raya Lucaria’s academy, from the Gracia “Academy’s Main Gate”. There you must take the side path and go down.

You will run into some wolves along the way until you find this merchant, from whom you must buy the fanged imp ashes for 2,000 runes. And as you may have deduced at this point, to solve the riddle you must summon these ashes. Hence, in the albinauric tower you are allowed to summon ashes…

Your fanged imp ashes don’t need to kill the albinaur tower imp, just hurt it. So it will not even be necessary for you to improve these ashes through sepulchral convalaria. In fact, you will see how easily they fall in front of this special imp. Just you will have to finish him off when they have hurt him so that the seal is opened and you can climb the tower.

What reward hides the albinauric tower

The reward of the chest located at the top will come in handy if you are looking to boost your sorcerer class, by giving you the talisman of grand amalgamation of wizards which greatly increases the power of spells. Best of all, equipping it doesn’t negate the chance that you can upgrade the standard Mage Amalgamation Charm, which “increases the power of spells” as normal. The more aids to magic, the better.