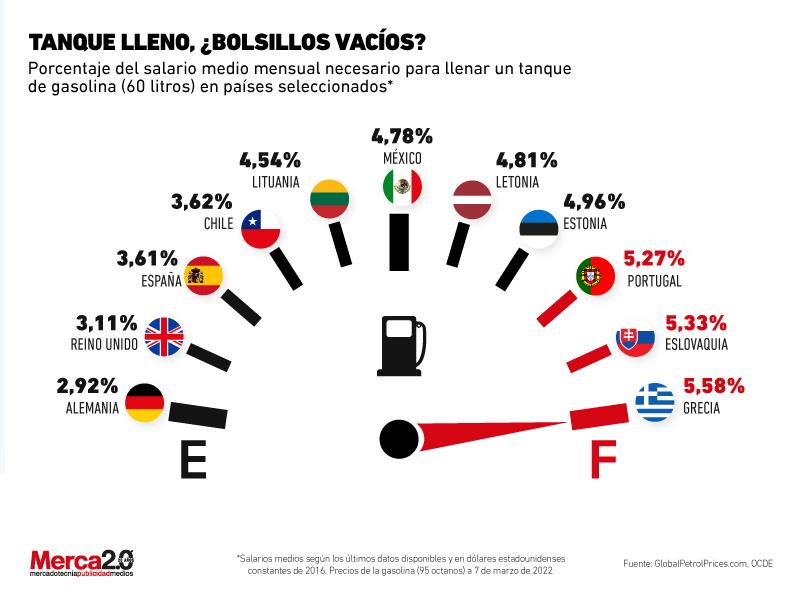 We show you the salary percentage needed to fill a gas tank in different countries around the world.

Today, products that are somehow related to the transportation sector are essential for the daily lives of millions of people and companies around the world, who directly perceive the smallest change in costs related to a particular item, gasoline. .

Without a doubt, the gasoline is part of the essential elements that manage to directly impact the economy of Mexico (and of the world), since the prices of different products and services come to depend on its cost, as well as those foods in your basic basket; among them, the tortilla, fruits, vegetables and others, since the investment of this fuel is included in its final cost.

Likewise, and to be a little more aware of the impact that arises from the variation in its price, it would be worth considering the rise of one peso in price of gasoline can imply a considerable decline in the salary percentage of millions, as well as those who are dedicated to offering a private transport service and must pay a little more money to recover what they invested in fuel.

The gasoline prices They can vary significantly around the world due to different factors, such as a wide demand for oil, speculation that its cost suffers in the stock market, political instability and actions to take ownership of it, among an endless number of factors that They have even managed to cause wars throughout history (just as the dispute between Russia and Ukraine has shown its first effects on the Mexican economy).

According to the Statista study where it shows the average price of a liter of gasoline in some countries around the world During 2020, Italy was the one that represented the highest cost of fuel, since its value reached around 1.56 dollars, while in France it cost 1.47 dollars, in Germany 1.43 dollars, in the United Kingdom 1.34 dollars, in Spain 1.26 dollars , in Japan 1.21 dollars, Canada 0.76 dollars and in the United States 0.55 dollars.

Different companies are responsible for offering this product around the world, but what happens in Mexico? It is estimated that about 50 percent of gas stations in the national territory belong to private companies, but if we talk about names, there is one that has managed to position itself like no other, Pemex.

According to the PETROIntelligence study, among the main fuel brands in Mexico As of February 2021, by number of service stations, Pemex proclaims itself the undisputed leader by registering 9,007 gas stations around the country, while BP ranks second with 529, G500 with 455, Exxon Mobil with 424, Total with 257, Repsol with 257, among other brands that at the moment do not represent any threat to the Mexican giant.

A “small” change in the price of gasoline can imply a considerable expense in the economy of millions of people around the world.