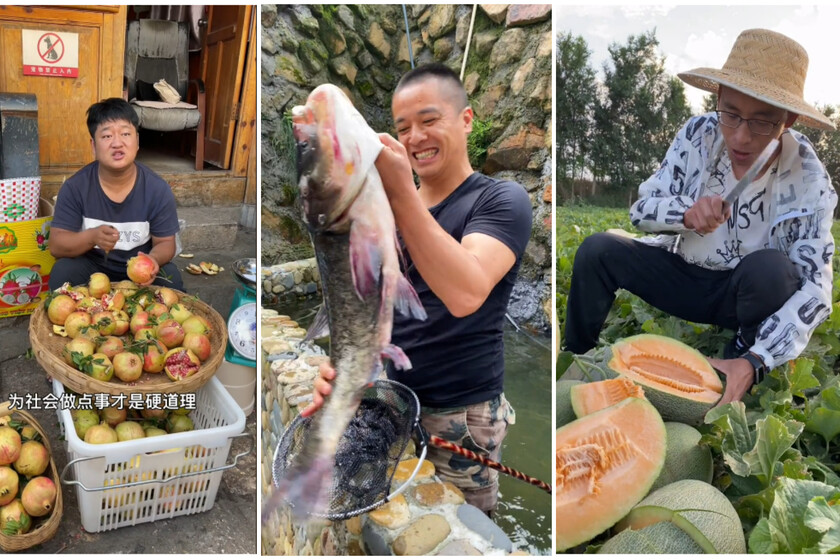 When we opened TikTok in Spain we found a constant stream of teenagers dancing. These contents are not lacking in its Chinese version – known there as Douyin-, but among the dances we find numerous videos of young people who tell about their day to day in the field. And some of them are authentic influencers, who are making a fortune by sharing their rural experiences and, on occasions, selling the production directly to his followers.

As it explains Selina Xu in a story publishing on Bloomberg, one of these influencers rural areas, known as Hermano Granada, had a turnover of 300 million yuan last year (almost 40 million euros) selling fruit. With his most successful video, he earned 780,000 euros in just 20 minutes.

According to data from Douyin – which is the most downloaded application in the world – the income generated by rural content creators on the platform has multiplied by 15 in the last year. Farmers in inland China sell their products directly to consumers in cities, thanks to live broadcasts and small videos.

They take them out of my hands

Hermano Granada, by name in pinyin Jin guowei, is specialized in selling, obviously, grenades. But there are profiles for all tastes.

Ma Gongzuo is a beekeeper and has nearly a million followers. In his case, the business is not based on the direct sale of the product, but on the content creation – as with almost all platforms of this type, Douyin pays out dividends to the most successful creators – in which it offers a showcase of life in rural China.

In his videos Gonzuo goes out extracting honey from his hives, but also fishing, peeling peas or digging ditches. Some activities that he did not always carry out because, like many of his social network colleagues, is what is known in China as anxiang qingnian, literally “Young returnee”: an increasingly important mass of thirty-somethings who are returning to the field. According to Douyin, more than half of his influencers rural people belong to this category.

Gonzuo returned to his village after a failed attempt to run a clothing business in the city. on-line. “They all said it was useless when they saw that he was coming back, ”Gonzuo explained to AFP. “They tell us that we can only get out of poverty if we study and get a job in a city.”

Read:  WhatsApp Web without depending on the mobile

Now, thanks to your videos published in Douyin, this thirty-year-old has earned enough to have a nice car, a house and help his family and neighbors with their businesses.

Back to the field

The percentage of China’s rural population was 89.36% in 1949, before the communist revolution. After this, Maoism fervently promoted urbanism and, in 2018, according to data from the Chinese National Statistics Office, the figure fell to 40.42%. But, as has happened in other parts of the world, covid-19 has caused a major urban exodus.

As Xu explains in Bloomberg, more than 23 million workers settled in the cities have returned to the town to telecommute from there. But, in addition, the confinement caused a increased demand for agricultural products, for urban Chinese, unaccustomed to cooking at home, were forced to prepare their own food. The demand on-line of fresh food skyrocketed, a great opportunity for many rural entrepreneurs, in which social networks like Douyin have played a decisive role.

This dynamic, in turn, has increased the interest of city Chinese in life in the countryside. All platforms streaming of China are full of videos of farmers showing their daily chores. There is even a social network, Kuaishou – one of the largest video broadcasting platforms in the world and the fourth largest social network in China (a direct competitor of Douyin) – that has cemented its success in rural China with a controversial system of sponsorships.

As long as they remain traditional, these contents also have the backing of the Communist Party, which welcomes the decongestion of cities and the strengthening of the rural economy. According to a group of researchers from the China Agricultural University, rural electronic commerce will grow by 61.3% until 2025 when 3.5 million people are expected to work.

A game developer explains why blockchain should be “invisible” in P2E games: KBW 2022