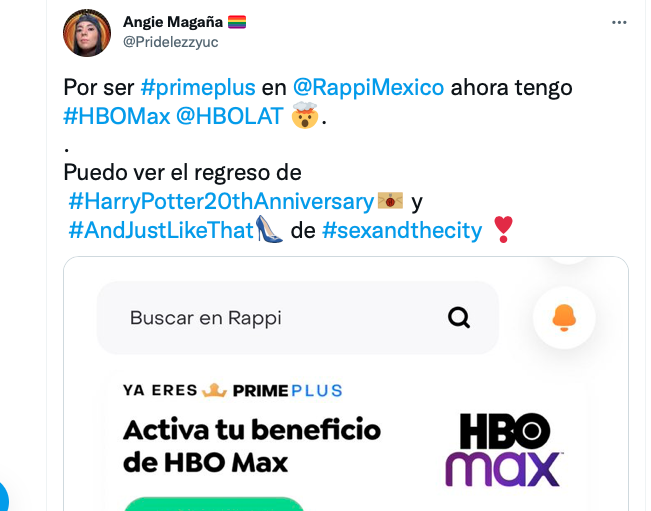 The loyalty that a brand can show its customers is the main thing they see when it comes to subscribing to its premium products. Rappi knows this very well and proves it to 50 percent of his registered clients in his “prime” membership.

The home delivery application has surprised one of these loyal consumers with the subscription of the streaming platform HBO Max, for being part of their exclusive Prime Plus group.

“For being #primeplus in @RappiMexico now I have #HBOMax @HBOLAT”, says the user in her account on the social network Twitter.

In addition, The netizen mentions that thanks to Rappi she will be able to enjoy the new season of Sex and the City and the Harry Potter 20th anniversary special, which can be found on the series platform.

Given this nice comment for the brand, The customer service staff and those in charge of Rappi’s social networks in Mexico did not hesitate to respond.

“Hey Angie! We can’t take you to your crush, but we can make plans to propose a date. Come on, a marathon awaits you at @HBOLAT with your favorite snacks! “, Says the reply tweet.

HBO Max is available with Rappi Prime Plus

Given this growth, the platform of Colombian origin has made various affiliations with other apps to provide various services to its loyal consumers.

In the month of december Rappi announced that its new Prime Plus users will also be able to enjoy a subscription on HBO Max.

Likewise, both platforms indicated that this alliance will give access to the standard HBO Max plan that offers families access to 3 simultaneous users, 5 personalized profiles, high definition video and content downloads and some 4K titles, on all devices compatible.

“Since we announced our arrival in Latin America a few months ago, our main objective has been that more and more people enjoy the experience and content that HBO Max offers. In this way, alliances like the one we are closing with Rappi, added to the quality of our offer with a first-rate catalog with great international and local productions designed for everyone that allow us to continue winning the preference of our users throughout the region ”, said Ana Julia Ghirello, Vice President of Partnerships at HBO Max.

User accuses that “RappiFavor” cost him 2,671 pesos and they never did