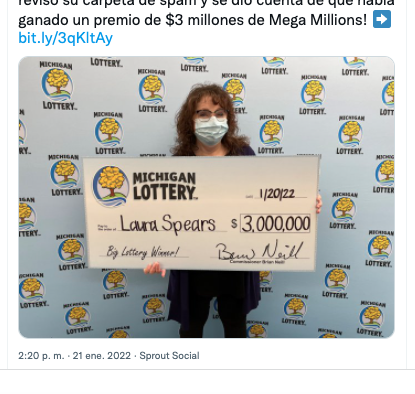 Most ordinary citizens have always dreamed of the possibility of winning the lottery, which is why raffles, games and activities are held practically everywhere in the world, where the prize consists of a millionaire sum that for many would be the exact amount to solve everything. type of conflicts: however, the chances of winning one of these prizes result in a slim chance against so many players, it is estimated that the chance of winning a generous amount of one of these prizes is only 0.00001 percent , which is equivalent to one chance in a hundred thousand opportunities, now imagine having this luck and spending several days without knowing that you have achieved a unique chance, because you did not check your email, because you did not take into account that not everything is Spam, and among the hundreds of junk mail is the winning ticket.

Junk mail or Spam is any electronic file that your account automatically sends to a space where everything is stored and is considered useless. It is worth mentioning that the majority of active users on the web do not review this section. frequently, since this is where unwanted discounts, promotions and advertising are stored, which only generates unread content traffic, however, it was here that the long-awaited notification announcing the lucky woman ended up, that she had won a millionaire prize of three million, by winning the Mega Millions lottery.

Not everything is spam, a woman wins the lottery and finds out days later

In social networks, the story of Laura Spears, a 55-year-old American woman, was revealed, who bought a lottery ticket belonging to the Mega Millions house, through the network, the woman was the winner of a millionaire sum greater than 61 million Mexican pesos; however, she did not find out about the great event until weeks later she checked her junk or spam mail.

Laura Spears got the surprise of a lifetime when she checked her spam folder and realized she’d won a $3 million Mega Millions prize! ➡️ https://t.co/ZmCSxPDQR8 pic.twitter.com/HjFeLrL8kR

The woman, when describing that in her Spam hill, there was a lottery mail, she realized that she had hit five numbers of the winning series of the Mega Millions lottery in Michigan, with a ticket purchased on December 31 , which had only cost him about 2 dollars or 40 Mexican pesos.

Situations like the previous one, put on the table not to rule out data and information traffic on the network, even if it is mostly considered garbage, since surprises like the previous one can be generated, that due to carelessness a millionaire opportunity could be lost. transform life, however; The large amount of incensed data that is mixed with important information on a daily basis must also be considered, and how it must be classified so as not to overexcite the viewer and so that they can better retain the content with which it is sought to impact them.

“How are you friend?”; Domino’s delivery man writes to a consumer on WhatsApp and they display it on Twitter

This is the luxurious mansion of Richard Gere that is sold for 28 million dollars; It has from beach to stables

They make fun of AMLO’s political will in networks; “Even dead he will try to violate the Constitution”

Tunden in networks to Pedrito Sola for tweet “racist” about the State of Mexico; this is what he said

The 2022 F1s in Monaco: one second slower and 100 more potholes per straight