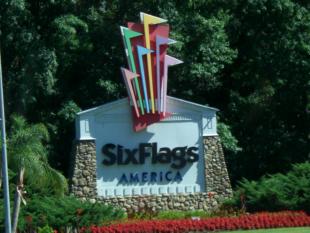 The brand Six flags She continues to live a nightmare since she was accused by an LGBT + community couple of discrimination. Now a singer accuses the brand of racism. The negative statement adds to the bomb that exploded in the hands of the famous amusement park in Mexico, after a couple from the LGBT + community accused the brand of discrimination. The accusation did not fall on deaf ears and in the last days of 2021 an intense brand crisis arose against the amusement park, which is revived with a statement from the vocalist Eduin Caz, who is widely known in the grupera music industry.

New bomb explodes in the hands of Six Flags

Eduin Caz, vocalist of Grupo Firme, is a sensation in the music market and through a live show revealed a new media bomb against Six Flags when he acknowledged that it was stolen by the brand, after one of the games was dropped his cell phone.

When trying to recover it, Caz assures that the employee of the place refused to give it to him when looking at his appearance, a fact that he attributed that his Latino complexion caused the employee’s discrimination, so this new accusation continues to sink the brand, which in Mexico starred the worst trend in networks, when a video climbed on social networks, where an alleged manager of the park in the country confronted a couple from the LGBT + community for kissing in the facilities of the place.

Eduin Caz stolen and discriminated against in Six Flags of California, the vocalist denounces that when he got on a game the device fell, he located it, one of the employees protected it for investigation and because he was Mexican they did not want to return it, great values ​​of this company 🔥🔥🔥 pic.twitter.com/9mkHQK5JGq

Inclusion is nowadays an uncomfortable word because it does not end up creating a culture that motivates its implementation in companies, consumers and brands understand it in a way and it ends up being a bet that fails to achieve an adequate advance in the market.

Given these pending, it is important to observe the elements that we have to take into account when it comes to innovating in what we communicate, especially what has to do with the way in which brands manage to get involved in practices that do recognize each of the consumers. from the right they have to be respected without discrimination.

Faced with these challenges, it is important to see the guidelines in which brands have to work and that determine the opportunity to work in the market. This invariably allows us to understand the resources of internal policies and new bets that have to be worked on, to achieve a brand adapted to reality.

Faced with this challenge, it is important to see the elements that help brands to understand the consumer and to be aware of the context is essential, to be able to identify what helps in consumption and, most importantly, what makes a bold brand.

The Ascent has already been classified for PlayStation consoles