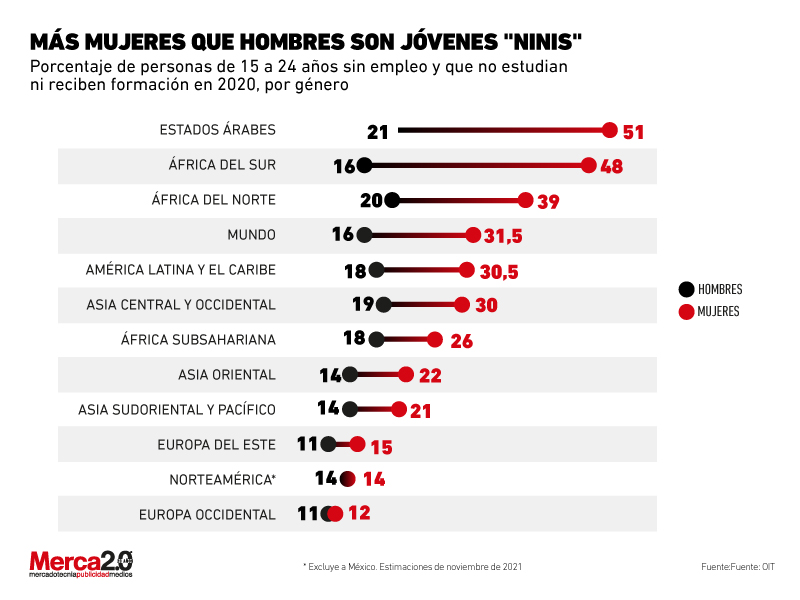 A recent study has revealed that women are now more likely to be classified as young ninis compared to men.

2020, as has been said on countless occasions, was a period of crisis in many ways, but one of the biggest problems has been, ultimately, unemployment, a problem that, to this day, continues to wreak havoc on several parts of the world, Mexico included.

Data from the International Labor Organization (ILO) reveal that, as a consequence of the health emergency, more than a billion full-time jobs were lost worldwide.

In Mexico, figures from the National Survey of Occupation and Employment (ENOE) carried out by the National Institute of Statistics and Geography (INEGI) indicate that, in all of 2021, around 2.1 million people lost their jobs as part of the fallout from the pandemic.

More women than men are “ninis”, according to the ILO

A recent report called Global Youth Employment Trends 2022published by the International Labor Organization (ILO), revealed that, compared to men, women are up to twice as likely to be classified as “ninis”, that is, those who neither work nor study.

In figures, the ILO reveals that, in 2020, up to 31.5 percent of women aged 15 to 24 were unemployed and not part of any educational program; by contrast, the percentage of men is 16 percent, according to estimates published in November 2021.

Reviewing the data of the graph deposited above, in the Arab states is where there is a greater lack of opportunities for women, the same as in South Africa, where, according to official figures, one in two young adults does not work or study .

Read:  They create anime for the Spanish National Team prior to the Women's Euro Cup

Focusing on Latin America and the Caribbean, the context is actually not very encouragingsince more than 30 percent of the female population between the ages of 15 and 24 does not work or study.

On the other hand, as revealed by the ILO, the regions of Western Europe and North America are the ones with the lowest rate of young ninis, in addition to having the lowest gender gap in this area.

It should be noted that in countries such as Canada and the United States, about 14 percent of the entire population between 15 and 24 years of age do not have any job and are not studying.