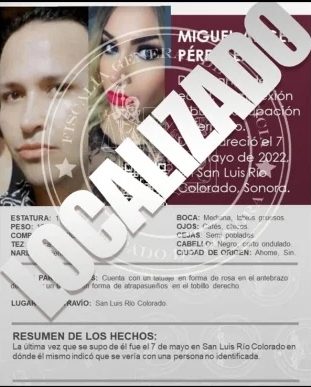 The State Attorney General’s Office (FGJE) confirmed the discovery of the body of Miguel Angel Perez Leala 36-year-old nurse reported missing in San Luis Río Colorado, since May 7 of this year.

Given the report to the C5i of the discovery of a body, in a desert area near San Luis Río Colorado, elements of the Sonora Prosecutor’s Office, the State Public Security Police and the Municipal Police moved to the site to carry out the corresponding actions.

At approximately 11 in the morning, a person reported that while helping a person who got stuck with his vehicle in that desert area, he discovered the presence of the body.

Index hide
1 In Zacatecas there was another murder…
2 VIOLENCE TO DOCTORS RESIDENT IN THE OUTSKIRTS OF THE CITY
3 But why don’t doctors want to go to the mountains to work? Is your denial REAL?
4 In five of the six most violent states, homicides increase by up to 51%

In Zacatecas there was another murder…

A young medical student was shot to death by a gunman in Zacatequitas, Pesquería.

The elements of the State Investigation Agency carry out the investigations to establish the motive for the murder and find the murderers.

The young man was found shot in his car, at the intersection of Nuevo León and Adolfo López Mateos.

It was established that around 7:30 p.m. this Friday the student arrived in his car Renault Scala to a property of his family, on Miguel Alemán street, in the aforementioned neighborhood.

It transpired that he was making various activities in that address and other family properties, in the same sector.

Neighbors mentioned that around 9:20 p.m. gunshots were heard and they notified the authorities.

One block north of Miguel Aleman Streeton Nuevo León street, they found the wounded young man in his car, which was parked.

When rescuers arrived, they confirmed that the student was already lifeless.

He had a bullet in the head, one in the left side of the neck and another two in the left arm and shoulder.

VIOLENCE TO DOCTORS RESIDENT IN THE OUTSKIRTS OF THE CITY

One of the biggest complaints from doctors who must do the social service or working in rural areas is the unsafety. The general opinion is that they cannot provide an adequate service because they themselves do not feel good about the imminent risk they face every day.

It is for this reason that attacks against health professionals are frequent in these types of places. In many cases they are left alone in front of hospitals or health centers and therefore remain vulnerable to organized crime or the inhabitants themselves.

President Andrés Manuel López Obrador justified this Monday the decision of his government to hire around 500 Cuban medical specialists pointing out that it is to cover the lack of care in the poorest areas of the country and where Mexican professionals do not want to work.

But why don’t doctors want to go to the mountains to work? Is your denial REAL?

In numerous municipalities of the mountain region, the Ministry of Health faces a serious personnel problem, including doctors and nursesderived from the fear that they have to work due to insecurity issues, even rejecting a considerable bonus.

However, wouldn’t your decision be RATHER the fault of the NULL security that exists in those distant places?

To determine what Mexico lacks, it is better to look at what it has left over: wage violence and misery. If these two things were eliminated, one could not speak of a lack of doctors or teachers.

“They send medical students to highly dangerous areas where crime rules. Even access to the place is complicated, you have to arrive by donkey or all-terrain vehicle to enter. The government has taken advantage of social service doctors, they are responsible for offering health. They go without logistical support, even the student puts his own money to buy medicines and supplies.

In five of the six most violent states, homicides increase by up to 51%

In five of the six most violent states in the country, insecurity does not let up. In the last month Guanajuato, Michoacán, State of Mexico, Baja California and Sonora had increases in intentional homicide between 8 and 51%.

According to the monthly report of the Security Secretary These states, in addition to Jalisco, concentrate 50% of the intentional homicides in the entire country: 3,660 of the 7,354 that have been registered so far from January to March.

As happened at the national level, intentional homicide increased in Guanajuato, Michoacán, the State of Mexico, Baja California and Sonora.

How many times a week should I exercise and for how long?