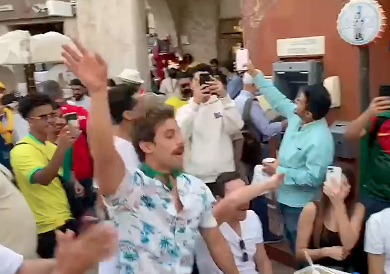 A video was recently released in which a Mexican is causing a stir in Qatar as he invites other foreigners who are in the place that appears to be a restaurant, to sing a song in which bye Messi.

Mexico It is one of the most fan countries worldin fact it occupies 5th place in the top 10 with the greatest fans, below Qatar, United States, Saudi Arabia and England. Tickets for the matches sold very well, with Qatar expected to record revenue of more than $7.5 billion.

Normally Mexico always stands out in the world for being one of the countries with the most fansAs a result of this, the behavior of Mexicans has also been made known over the years and not always in the best way, among this we can highlight the time in which the Mexican, Rodrigo Rafael Ortega urinated and turned off”the eternal flame”, a structure that commemorates the fallen soldiers. After what happened, members of the police detained him and referred him to the corresponding authorities, this happened in the 1998 World Cup in France.

Things are already beginning to get tense due to the next confrontation he has Mexico against Argentinaon Saturday, November 26, these teams belong to group C.

The value of Messi in the market has been changing over time, currently it is no longer worth what it was before, largely due to his age, in fact this will be his last participation in a World Cup, the Argentine soccer player has reached reach up to 180 million euros in its best times.

Read:  The album of the World Cup in Qatar 2022 Panini goes up in price, this costs to fill it

Currently, one of the best paid in the Argentine National Team is Lautaro Martinez with a market value of 75 million euros, which has left Messi below expectations.

It is known that Mexicans are always something to talk about in a World Cup, both for better and for worse, and on this occasion Qatar It has not been the exception since a video recently came out in which a young Mexican can be seen with the Mexican flag on his back, causing a stir among several foreigners, leading them all to sing a song that mainly says “BYE BYE MESSI“.

On Twitter, many Mexicans have commented that they want Mexico to beat Argentina just so Messi can retire from the World Cup without ever being world champion.

BYE BYE MESSI, WELCOME SAUDI ARABIA! 😂🇲🇽🇸🇦 #FOXSportsinQatar The jokes against Argentina and Lionel Messi do not stop in Qatar and now it was a Mexican who organized any number of foreigners to help him pic.twitter.com/lKVZr5pkQv

Argentina He has been world champion twice, in 1978, winning in his own country and in 1986 in Mexico.

The behavior of this Mexican has only been the beginning of what is to come since on the day of the confrontation next Saturday, there will be no shortage of mockery and outstanding attitudes from the Mexicans, anything can happen, it is expected that the equipment albiceleste take this opportunity to recover from your last loss against arabian arabiaa fact that surprised everyone since it is known that the Arab team does not have many forces or recognition as ArgentinaIn fact, the Saudi Arabia team is one of the least expensive, it is valued at 20 million euros, this team is the second cheapest after Qatar.

Messi is worth almost triple that of the Saudi Arabian National Team and, even so, he lost

Jamal Musiala, the German Messi who assures could win the World Cup

Mexico vs. Argentina; Alexa answers who will win in Qatar