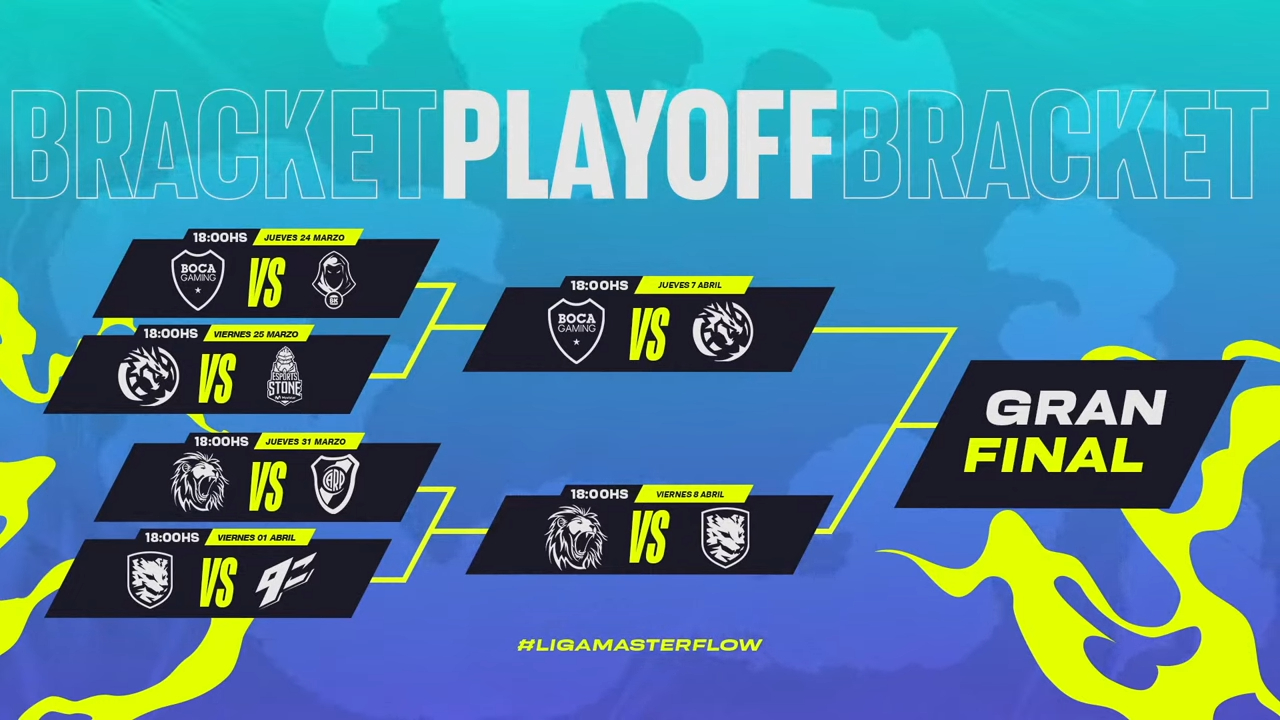 Index hide
1 The 2022 Master Flow Opening League is coming to an end and this week we will have the finalists. Find out the dates, matches and times in this note!
2 Share it with whoever you want
3 Related Posts

The 2022 Master Flow Opening League is coming to an end and this week we will have the finalists. Find out the dates, matches and times in this note!

The penultimate week of Master Flow League is spicier than ever, with Undead BK, Stone Movistar, River Plate Gaming and 9z already out of competition. The winners, Boca Juniors Gaming, Leviathan Esports, EBRO and Pampas are the four protagonists in the semifinals that will seek glory.

The first week he left us a Boca Juniors devastating, after obtaining their 3-0 against an Undead BK which did not get off the ground in the series. Leviathan also showed its solidity against Stone, with an impressive 3-0. These results agreed the first meeting for the semifinals between the xeneizes and the levianeta. Both come on a winning streak and the team of Ferdinand Ten he wants revenge for not being able to beat them in the league where a 2-0 victory was recorded in favor of the xeneize team.

Last week they finished the quarterfinals in the #LigaMasterFlow and, so you don’t miss a thing, we invite you to relive the best of the top 3 moments presented by @YPFServiclub ⚡#ServiClubMeSirve pic.twitter.com/MXkLC4zinp

In the second week, Ebro knocked out River Plate Gaming 3-1, turning the series that Nuñez’s team had controlled. After the first match won by the millionaire, the team of the little witch Verón managed to get fifth to the bottom and win the three games in a row to qualify for the semis. On the other hand, that Friday we had an impeccable game from Pampaswhich continues to destroy all the competition, and in this turn it left out at 9z in a 3-0 more than deserved.

Read:  PS5: launch of pre-orders on July 13 of the new Sony console?

This leaves us with Friday’s matchup: EBRO vs. Pampas. Both have a 1-1 record in meetings this season. The confrontation between the team of “Wizard” Coria and the “little witch” will have a special spice, since Pampas managed to take the runner-up position from EBRO in the league.

The series will air from 6:00 p.m. both Thursday and Friday Flow Gaming (channel 601 Flow) and the official channels of LVP Argentina on Twitter and Youtube.