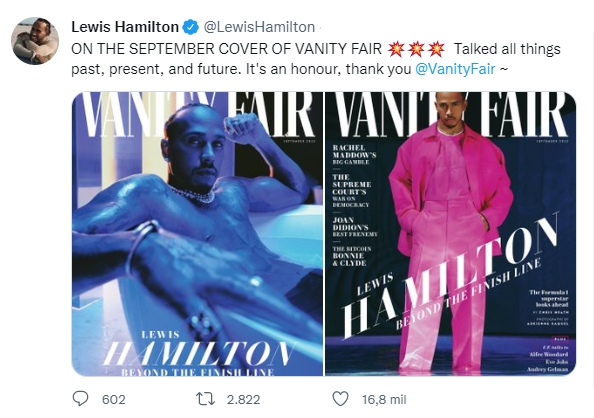 The text belongs to the beginning of the interview that Formula 1 driver Lewis Hamilton gave to Vanity Fair. The cover, which was released this Monday, August 8, is a trend on the networks.

In Vanity Fair, Hamilton says that despite everything, he continued to do things his way.

He did not do badly, after winning seven world titles, he is one of the most famous and best paid athletes in the world, even more so since the Netflix documentary series “Formula 1: Drive to Survive” brought that sport to new audiences.

In the interview, Hamilton tells why he decided to tattoo the phrase “Powerful Beyond Measure”.

“I read it and thought it was one of the best quotes ever,” Hamilton explains to Vanity Fair.

And he adds: “What struck me the most is the part that says: ‘we should never have to dim our light to make others feel good; in any case, we should shine as bright as we can to inspire others to do the same’. I live my life well. For a long time in my life I felt like I was dimming my light because I felt uncomfortable.”

ON THE SEPTEMBER COVER OF VANITY FAIR 💥💥💥 Talked all things past, present, and future. It’s an honour, thank you @VanityFair ~ pic.twitter.com/7fKiDdHmq2

Lewis Hamilton on the cover of Vanity Fair

“I’ve never liked being told what to do,” says Hamilton in another section of the interview with VF. Says who races with two earrings and a nose piercing even though there is a rule in F1 that prohibits drivers from wearing jewelry in cars for safety reasons.

Read:  Camila Cabello gets the mullet haircut with bangs that Sara Montiel wore and is now trending on TikTok

It must be remembered that Hamilton attended a press conference before the Miami Grand Prix wearing, with the idea of ​​flouting the rule, with a ring on each finger, several chains and three watches. “I put on everything I could,” he said. “There is one of the piercing that he could not explain where he is,” he added.

At the British Grand Prix, Hamilton took off his piercing to avoid sanctions against Mercedes, but the doubt remained regarding the piercing “hidden”.

In the interview with Vanity Fair, he now admitted that it was a joke. On his comment that “you can’t delete at least two of them, one, I really can’t explain where it is,” she said with a laugh, “I was just making a joke out of it.”

“I have no other piercings anywhere. But I love that people think ‘shit, did he get his balls pierced?’”

“In 2022, we want to fight on the track”, the letter of “congratulations” from Mercedes to Red Bull