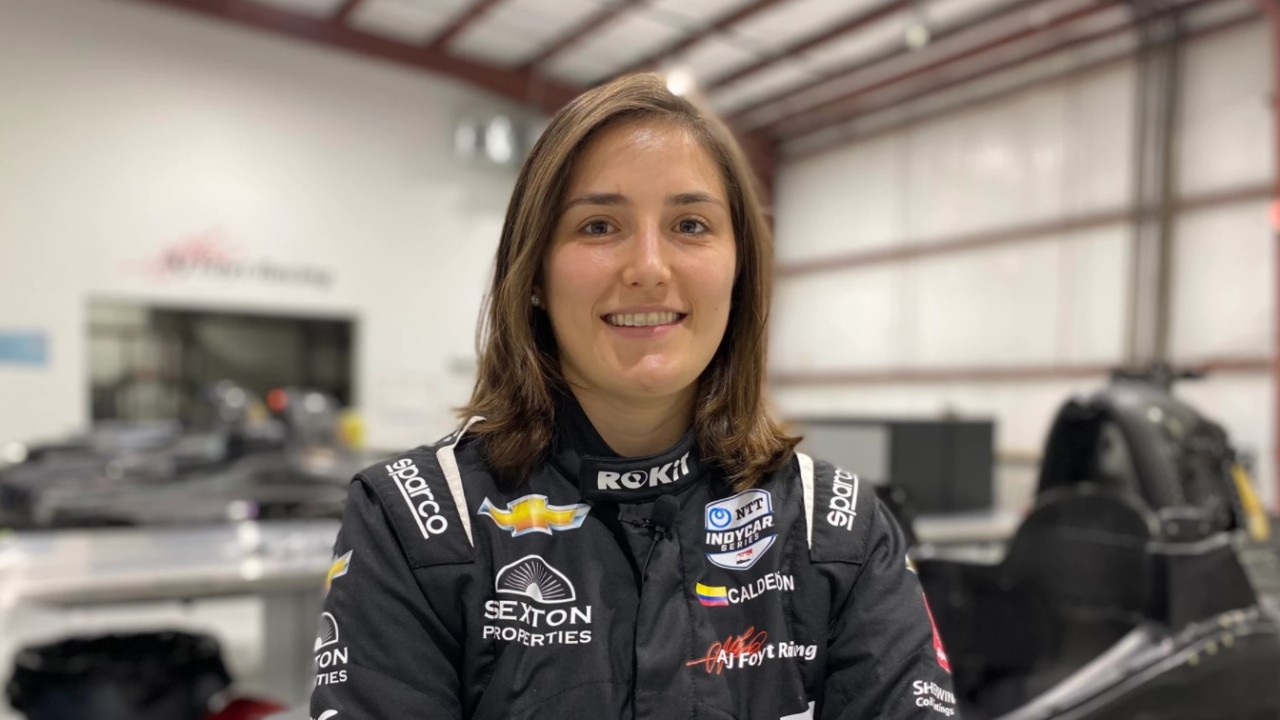 The 2022 IndyCar season still had one last ace up its sleeve in terms of surprises, and it was played this Monday when the incorporation of Tatiana Calderon to the championship. The team A. J. Foyt Racing has announced that the Colombian, who has lived in Madrid for many years, will be at the wheel of a third team car, with the number #11, in the twelve races of permanent and urban circuits, where he will accompany fellow newcomer Kyle Kirkwood and Dalton Kellett.

Six months after a successful exploration test in Mid-Ohio from which all parties were satisfied, Foyt has managed to complete the expansion of its fleet to three vehicles with the arrival of Calderón, who will take on the difficult challenge of IndyCar and being the first woman since 2013 with a substantial program. In this company, oval races are excluded for the moment, including the Indianapolis 500, as Romain Grosjean or Jimmie Johnson already did this past 2021 to take the pulse of the category before signing full programs.

Calderón’s arrival comes thanks to the expansion of the economic agreement with the ROKiT company, which has sponsored car #14 since last year. Although recently lost a hefty $35m lawsuit with Williams F1, the technology firm not only maintains its presence in Kirkwood’s car, but has also played an essential role in Calderón’s signing, being one of its main supporters since 2020. Beyond its presence on circuits, the brief “To date no pilot has been signed for the ovals” leaves the presence of this third vehicle in other oval venues beyond the Indy 500 up in the air.

Calderón turns 29 on March 10, but he will have an early gift two weeks before when he plays at the Grand Prix of St. Petersburg his first IndyCar race on February 27. Of course, due to his absence on ovals, he will skip the Texas appointment in March and will not return to the track until April 10 in Long Beach. In any case, she will be the first woman to contest an IndyCar circuit race since the great fourth place of Simona de Silvestro at the ill-fated 2015 New Orleans Grand Prix. The Swiss was also the last to have an extensive program in 2013, and last year she was the only woman on the grid for some 500 miles of Indianapolis in which she was joined by three other drivers in the 2010, 2011 and 2013.

Index hide
1 WOMEN WHO HAVE COMPETED IN THE INDYCAR SERIES
1.1 Most versatile award: one million for winning in permanent, urban and oval

WOMEN WHO HAVE COMPETED IN THE INDYCAR SERIES

American motor racing was the scene of Calderón’s first steps, which competed two years in Star Mazda (current Indy Pro 2000) with a sixth place overall in 2011, the year he began to venture into the lower European categories. Between 2013 and 2018, Calderón competed in European Formula 3 and in GP3, never getting higher than 15th overall, but leaving good flashes in a couple of seasons. This was followed a disastrous passage through Formula 2 in 2019 in which he was consistently at the bottom of the pack and failed to score points for Arden.

Despite this, Calderón went on to compete in the competitive Super Formula in 2020, something he planned to combine with his incipient appearances in the European resistance, but COVID-19 turned this company into an odyssey due to restrictions in Japan. The Colombian ended up missing five of the 14 races she should have played, and failed to score points either. In between, two appearances in the 24 hours of Le Mans alongside Sophia Flörsch and Beitske Visser, with whom he finished in ninth position in the LMP2 class in 2020.

Most versatile award: one million for winning in permanent, urban and oval

With her debut, Tatiana Calderón will become the 12th woman in history to contest an IndyCar race. The ban was opened in 1976 by Arlene Hiss and Janet Guthrie, who would become the first woman to qualify for the Indianapolis 500 the following year. No competitor left as much mark on a sporting and media level as Danica Patrick, who scored a historic victory in 2008 at the Motegi oval and a fifth overall finish in 2009 before joining NASCAR. Hers were also seven of the 10 ‘female’ podiums in IndyCar, completing the list the two of Sarah Fisher and the last one, the work of Simona de Silvestro in Houston 2013. That second place equaled the one obtained six years earlier by Patrick in Detroit as the best result of a woman in circuit.

PlayStation Plus will offer Ubisoft+ at no additional cost