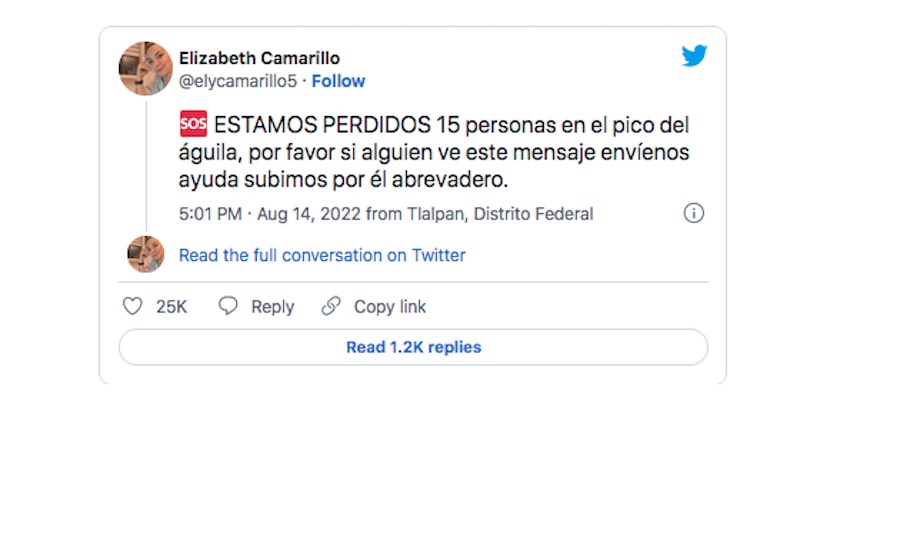 A group of hikers got lost in Ajusco and a message in Twitter with coordinates was key to finding them.

The story starring people, who thanks to connectivity in remote areas were able to ask for help through the social network, which reveals the value of the digital medium beyond leisure.

The fact is a precedent of other cases of users of social networks, who go to the media to show facts beyond following a influencer or join in a social conversation.

Inside of the “Digital 2022: Global digital overview”the study he found that the main reason for accessing Twitter It was because it allowed 47 percent who considered it so, maintain communication with family and friends.

The communication link that networks have and how they motivate it among their users is undeniable, as a way of getting involved not only in ordinary situations, now making use of this habit of communication but in moments of alert.

Regarding what is published on networks and the impact that a complaint has through these platforms, there are situations such as the one that occurred in Ajusco, where a group of hikers was rescued, but in the United States it has even served to demonstrate acts crimes, such as the one that occurred in 2015 when the driver Pedro Ferriz was making a live broadcast, which showed the moment in which he is the victim of an assault.

“He pointed a .38 caliber square at my face. That’s when I try to record his face and he took my cell phone (smartphone) from me, “the driver said at the time.

From assaults to calls for help

A call for help from Twitter it became the latest case of how good connectivity allows communication beyond the ordinary in social networks, especially in critical moments.

The action taken in Twitter by Elizabeth Camarillo began by alerting that together with a group of 15 people they were lost in a place known as Pico del Águila, where he explained that they had come through El Abrevadero.

The event ended with the congratulations he gave to rescue members of Mexico City, in a fact that was even confirmed by the head of Citizen Security, Omar García.

🆘 WE ARE LOST 15 people at the peak of the eagle, please if anyone sees this message send us help we climb through it trough.

A great effort from colleagues #ERUM and policemen from @SSC_CDMXallowed the location of 13 adults and one minor lost in the #adjust They were taken to a safe area to be treated by paramedics. pic.twitter.com/1baESNBTfe

This case patents a very interesting reference of how to communicate through social networksas well as the importance that these media have for the user in drastic moments, where one point is important to highlight, the value of a simple post and above all, the ability to interact in the digital medium, beyond what Ordinary.