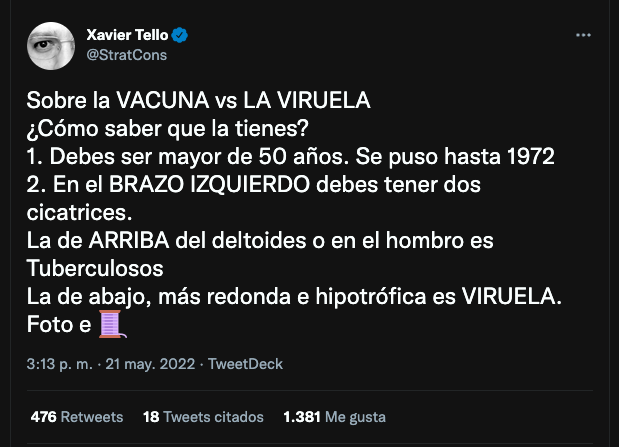 During the last days the smallpox vaccine has gained relevance. This is the best example of the usefulness of immunizations. Thanks to a massive global campaign in the middle of the last century, it was possible to eradicate this disease, which is considered one of the oldest in humanity.

Index hide
1 First cases identified
2 Smallpox and monkeypox, similar but not the same
3 How do you know if you received the smallpox vaccine?

Based on the records it is thought that smallpox originated three thousand years ago in India or Egypt. It is even mentioned that historical figures such as Pharaoh Ramses V contracted the disease because their mummified remains have distinctive markings on their skin. While later the problem expanded to Asia, Africa, Europe and America with the conquest of the Spanish.

For their part, some historians claim that Smallpox represents the largest pandemic in history. Although there is no definitive figure, at least during the last 500 years it caused more than 300 million deaths. At least until the beginning of the 20th century it was one of the leading causes of death in countries like Mexico.

Smallpox and monkeypox, similar but not the same

From the recent arrival of smallpox from the world to the western world is that importance has now been given to this ancient disease. In the first instance, it should be emphasized that they are not the same, although they do share some similarities.

Similarly, monkeypox is not a new problem either. The first recorded cases occurred in 1970 in Zaire (the territory that is now the Democratic Republic of the Congo).

Since then there have been several outbreaks that have been controlled. What they all had in common is that they occurred in Africa. Therefore, what has caused the most alarm is that for the first time in history it has spread to other regions of the planet such as Europe and America.

Read:  Post Malone announces that she will have her first child

Against this background, several people have wondered if the smallpox vaccine might work to provide protection. The answer is yes, although one of the problems is that since 1972 it is no longer applied in Mexico.

How do you know if you received the smallpox vaccine?

For his part, the Dr. Xavier Tello He shared through his social networks a fairly simple recommendation to know if a person received the smallpox vaccine as a child. It’s all about doing a little visual check on the left arm.

Specifically, two marks or scars should be observed. The one above the deltoid corresponds to tuberculosis. While a little further down, another round and hypotrophic shape should appear and that corresponds to smallpox.

About VACCINE vs SMALLPOX
How do you know you have it?
1. You must be over 50 years old. It was put until 1972
2. On the LEFT ARM you should have two scars.
The one ABOVE the deltoid or in the shoulder is Tuberculous
The one below, rounder and more hypotrophic, is SMALLPOX.
Photo e 🧵

Now, because the smallpox vaccine was discontinued in 1972, all Mexicans under the age of 50 did not receive the vaccine. The reason for this decision is because in the seventies the World Health Organization (WHO) declared this disease eradicated.

On the other hand, based on the doctor’s publication, some people commented that in the case of women over 50 years of age, the inoculation was applied to the outer aspect of the upper part of the left thigh.