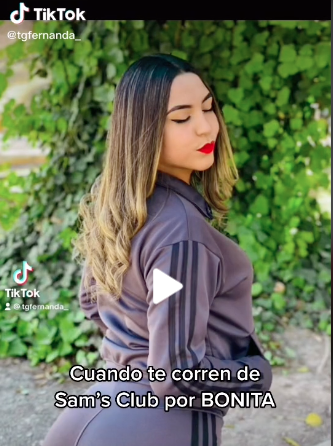 Fernanda TG is a young woman originally from Saltillo, Coahuila, she is influencer and has 292 thousand followers on TikTok and 73.9 thousand on Instagram. After she posted videos about her work at Sam’s Club and produced content during working hours, the young woman accused that she was fired from her for being “pretty”.

TikTok is very successful among the younger audience, under 30 years old. The video-sharing social media app launched internationally in 2017 has seen exponential growth in recent years.

As of 2020, the social app has been downloaded more than 315 million times, making it one of the leading apps on Google Play and App Store worldwide. Statistical data.

Today, all kinds of creators and brands are turning to the platform as a way to win over younger audiences. Due to its impact on society, everything that is said on social networks is taken into account by brands, since both positive and negative opinions have an influence on the way they are observed by consumers.

In 2020, the financial report published by Walmex recorded that there are 164 Sam’s Club branches in Mexico. The store belonging to Walmart Mexico and Central America is characterized by having a great presence on social networks, in June 2021, the self-service store with wholesale sales, was the brand with the largest number of followers on Twitter and until that moment it had with 476 thousand followers, indicate data from Statista.

Although the influencer did not mention the position she held in the American chain installed in Mexico, she shared that they fired her for being “pretty”. The publication is accompanied by a photograph of her and the publications that various media have made about her work in the retail chain.

Also, Fernanda TG posted a video where she is wrapped in blankets in a hallway at Sam’s Club.

“My mom: She must be working very hard for sure” and then she appears “sleeping” in the hallway.

So far, the chain operated by Walmart Mexico has not commented on the situation with the influencer. The truth is that creating content during working hours may have been frowned upon by the company.

Distractions at work translate into lost time, decreased productivity, or can even cause accidents.

The main distractions in work spaces are fatigue, stress, disorder and the use of electronic devices, in the case of influencer his desire to promote himself and tell about his day-to-day activities won out over his responsibilities.