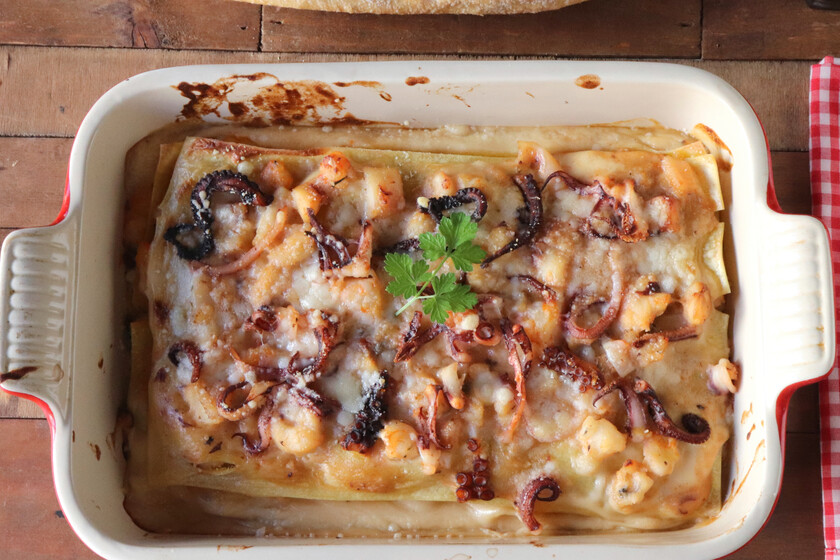 Cook the octopus and when it is tender we cut the tentacles into pieces of approximately 1 cm thick, which later we cut into smaller pieces, reserving the tips of the tentacles for decorating. To clean the squid, we rinse them under the tap and separate the head from the tube. We remove the transparent cartilage and turn the piece over to clean the guts and ink bag, also removing the skin. With a knife, we also separate the fins. We also reserve the tentacles to decorate the last layer of the lasagna.

We clean the prawns, separating their heads, removing the legs and the hard skin that protects the body and finally the black filament or intestine. We proceed to prepare the seafood broth with the heads of the prawns. Once the broth is made, we use it to prepare a velouté or béchamel made with broth instead of milk. Make a roux with 20 g of flour and 20 g of butter, add the broth or stock and mix it while stirring. We rectify the salt and reserve the velouté covering it with transparent film.

We cut the monkfish into half-inch pieces and fry them lightly in a wide frying pan with oil flavored with two cloves of minced garlic. We continue frying the octopus in the same oil and then we do the same operation with the chopped squid and its fins and we finish with the chopped prawns. Once everything is ready, we mix the ingredients by tying them with a little of the velouté and we can proceed to assemble the fish lasagna.

Read:  The 10 campaigns of the week: Between Paralympians and vaccines

We spread a small layer of velouté On a baking dish and on it, we place lasagna sheets to cover the bottom, overlapping them slightly if necessary. Sprinkle with the grated cheese and put a layer of the fish mixture. After cover with the pasta and a layer of velouté And so we repeat another three times, completing 4 layers of pasta, ending with a last one of fish, in which we put the tentacles of the octopus and the squid to decorate. 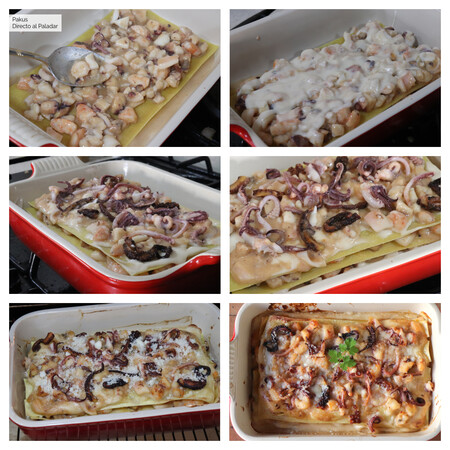 Bake for 20 minutes in a preheated oven at 170ºC. Then sprinkle with a little grated cheese and gratin for 5 minutes to toast the surface. We remove from the oven, let it temper for a few minutes so that the lasagna can be easily cut later, and we take it to the table to the delight of the diners.

Do you use an alternative email? You may have these problems

Jamie exposes that Britney threatened her and was violent