By NicolasDecember 2, 2022No Comments3 Mins Read 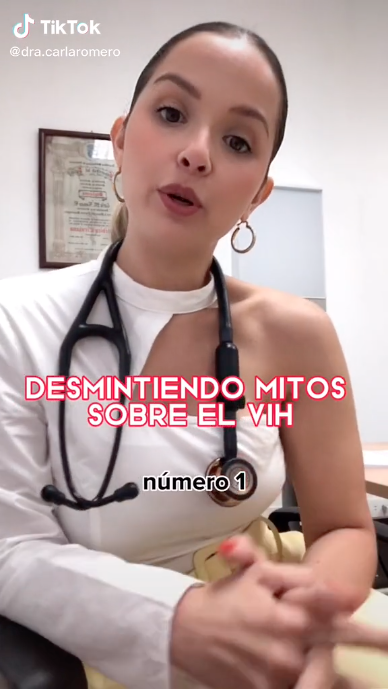 The Venezuelan-born internist, Carla Romero, has viralized a video on her social networks where she talks about some of the most famous myths surrounding HIV as well as people who suffer from this condition.

The first of the myths that the doctor disproved is about whether a person kisses another who is a carrier of the virus can contract the disease, The answer is no, this is because it has been shown that saliva does not transmit the virus from person to person.

The second of the myths that the doctor disproved about HIV is that if any of the fluids that do transmit the virus, such as semen, vaginal fluids, blood, or breast milk, touch the skin of a person who is not infected, it can cause to contract the virus.

The answer is false, contact with any of these fluids from a person carrying the virus with the skin of another person who does not have the virus will not cause the healthy person to contract the virus.

The third myth disproved by the health professional is about the ways in which the virus can be transmitted to another person where she has mentioned that having sexual relations is not the only way to contract the HIV virus.

According to the US Centers for Disease Control and Prevention (CDC),a person can also be infected by sharing needles in the case of drug use and in the specific case of pregnant women, the baby can be infected with HIV during pregnancy, childbirth or through breast milk.

The fourth and fifth myths that the doctor has disproved about HIV are about whether the virus is present only for homosexual people and that women who are HIV positive cannot have children. The answer to both cases is false, because the HIV virus can affect anyone and in the case of women who want to have children they can do so without any impediment.

HIV in Mexico: IMSS offers antiretrovirals to 96% of patients

Antiretroviral treatments, allies in the fight against HIV

Pfizer employee admits that they seek to mutate the covid