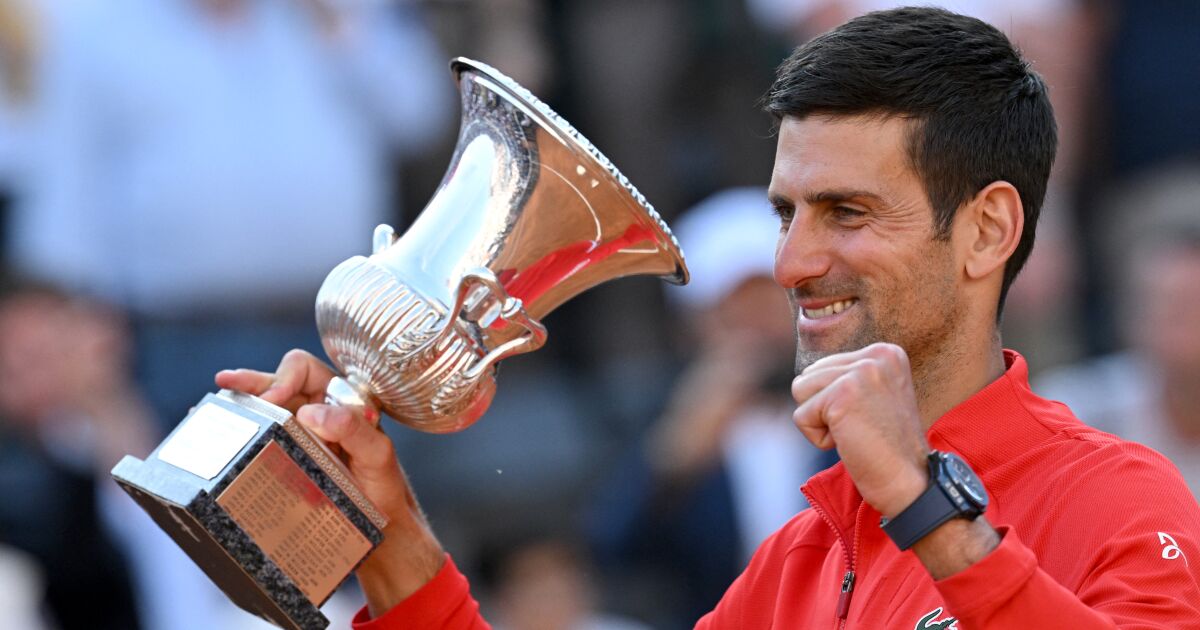 It was the 1,001st career win for the Serb, who has already entered the select club of players with the most winsalong with Jimmy Connors, Roger Federer, Ivan Lendl and Rafael Nadal, by beating Norwegian Casper Ruud in the semifinals.

It was the perfect week for ‘Nole’, who in addition to his 1,000th victory and the crown in Rome, managed to maintain the highest position in the standings until Roland Garros. Djokovic played his second final of the year, after losing to Russian Andrey Rublev in Serbia, and this time he didn’t fail. He clearly defeated a Tsitsipas who did not appear in the first round and that he did not know how to take advantage of his advantage in the second.

The Serbian destroyed it in the first set. In half an hour he had already signed a perfect 6-0, without failures, which he despaired of a Tsitsipas who paid for it with his racket. The failures of the Greek, very erratic, and the solvency that he has shown until the final were enough for Djokovic to break his rival’s three serves and maintain his own service.

The story was completely different in the second stake. Despite a few unforced errors, Tsitsipas, encouraged by the public, eager for entertainment and reluctant for the match to be a mere formality for the Serb, found strength and good tennis to mentally recover from the hard blow conceded.

He broke the Serb’s serve and confirmed the ‘break’ with his to go 4-1 up. It seemed that he was going to redeem himself quickly from the previous set, but ‘Nole’ was not going to allow it. He recomposed the one from Belgrade, returned the ‘break’ to the Athenian and put the equalizer, 5-5 on the scoreboard. A powerful cry of rage came from Djokovic, who with a clenched fist released the tension and knew he was closer to victory.

Read:  Djokovic and Zverev advance to the third round

The equality in the second set inevitably led the set to a ‘tie-break’. It was the Greek tennis player’s last chance to extend the match, but at 2-2 he crashed his backhand against the net and gave up his serve. He recovered and made it 5-5, but Djokovic did not fail in one of his favorite tournaments and returned another ‘break’, definitive, to sentence the match and the tournament.

Djokovic crowned again in Rome, in one of the most special weeks of his career. It is the 11th consecutive season that Novak has reached at least one Masters 1000 final, and only Roger Federer and Rafael Nadal, at 14 and 15, respectively, have seen more such seasons during their careers.

The Serbian player, about to turn 35, He is the one who accumulates the most Masters 1000 in history with a total of 37. In addition, he is the only one who has won all nine tournaments in that category.