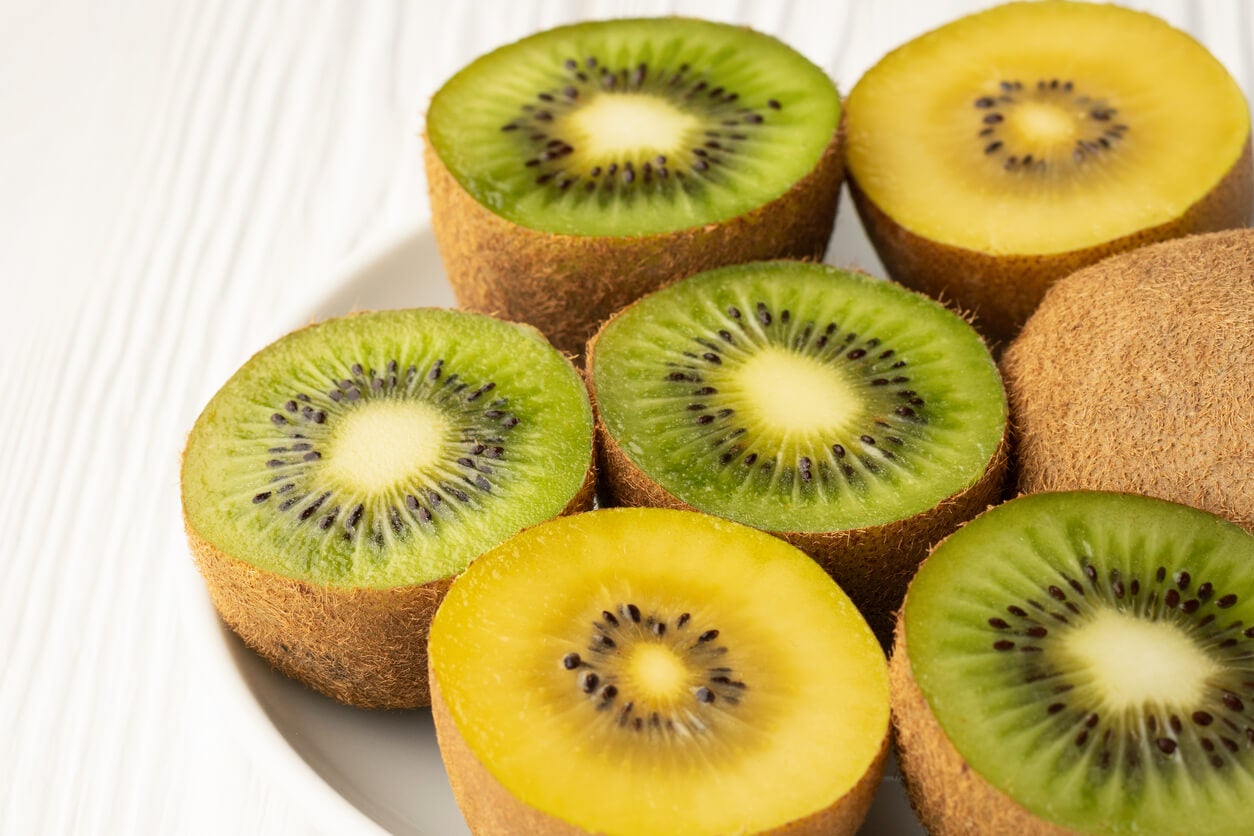 In just a few decades, kiwis have become the favorite fruit of many people, both for their properties and for their taste. The most prominent varieties are green and yellow.

Roughly, they are similar varieties of the same fruit, But there are some differences between the green kiwi and the yellow kiwi. Although perhaps they are subtle, it may be that they will make you opt for one or the other on your next visit to the greengrocer.

In a short time, the kiwi has gone from being an almost unknown and wild fruit to being exploited by man and becoming a crop of international commercial importance.

It is a tasty and nutritious fruit. With a medium piece you can cover the 85% of the recommended daily allowance of vitamin C. In addition, it is of great help for those with intestinal problems.

Origin and characteristics of kiwi

The kiwi fruit is native to China, where it grows in temperate forests and on the hills of the southwest. It is actually the berry of a creeper. There she was known by the names of yangtao (strawberry peach) and mihoutao (monkey peach).

In the early 1900s it was introduced to New Zealand and since then it has been cultivated in other areas with a warm climate. It is in this country that it acquires the name of Kiwi, thanks to the bird of the same name and which is a national symbol of the islands.

The green kiwi (Delicious actinidia) is the most cultivated worldwide. Of all its varieties, the type Hayward It is the one that stands out above the rest. The yellow kiwi belongs to the species Actinidia chinensis, whose cultivation is the second in importance.

Naked eye, the biggest difference between the two fruits is their physical appearance. Once peeled or sliced, the yellow stands out for its striking, almost smooth golden color. In contrast, green has a deep greenish hue and is speckled with black seeds.

Externally, the green kiwi has rougher, hairier, harder and darker skin than the yellow one. On the other hand, the latter is covered by a thinner layer and of a light color. All parts of the fruit are edible, although the rough and tough skin is often discarded.

When they are tested, yellow kiwi stands out for being sweeter and softer than green. For this reason, the former is perfect for adding and decorating sweet dishes and desserts, such as cakes, ice cream or cakes. It is also ideal to eat alone as a snack.

Read:  How do you know if your body lacks certain vitamins?

In the same way, the green kiwi is eaten alone and is the favorite of those who are attracted to the acid taste. It is an ingredient for smoothies and to serve in a multitude of savory dishes.

Kiwis are fruits with a high concentration of nutrients. These include vitamin C, dietary fiber, and folates.

But also, also contain other components Very interesting bioactives, such as enzymes, antioxidants and various phytochemicals. This is the nutritional composition of 100 grams of edible portion:

It seems that both (the green and yellow kiwi) are quite similar in composition. In addition, they do not differ much from other varieties that can be found on the market. The main difference is in the vitamin C levels, much higher in the gold.

Ascorbic acid (or vitamin C) is a important micronutrient for daily operation. It has an antioxidant property that allows it to combat the harmful action of free radicals. It is necessary for the production of collagen and improves the absorption of iron.

Its role in health has also been known for a long time. In a review of studies of Cochrane its role in the better functioning of the immune system and in reducing symptoms of the common cold.

Apart from these properties, kiwi is a fruit that helps the digestive process, both for its dietary fiber and for presence of some enzymes that help break down proteins. It is also perfect to promote intestinal transit.

Including plenty of fruits and vegetables is a beneficial habit and one of the foundations of a healthy diet. Kiwifruit, both golden and green, have an interesting amount of vitamins, fiber and antioxidants that are positive for health.

Choosing one or the other is almost a decision of personal preferences, because the most important differences are in flavor and texture. Although in certain times and places it can be more difficult to find yellow, it is also more expensive.

Both keep very well at home, out of the fridge and sheltered from the sun and heat. However, it is preferable to watch that they do not go too mature.

Once the ideal point has been reached, It only remains to decide if you want to eat alone or with someone of other fruits, smoothies or in a salad. It does not matter when, because kiwis provide all their properties, whatever the time of day they are eaten.