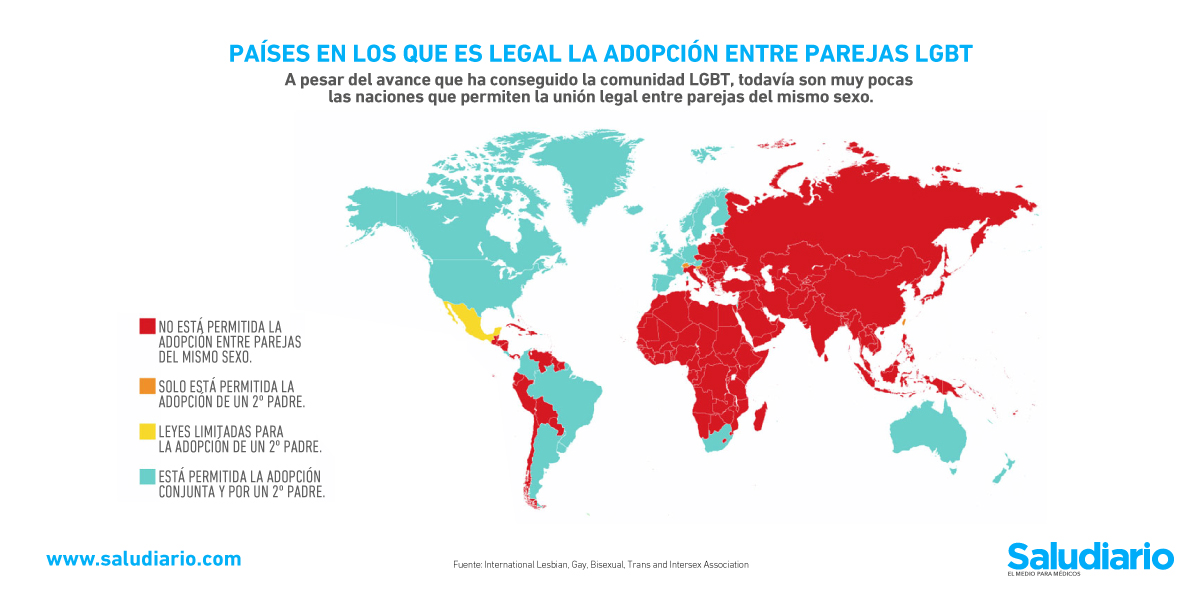 Gradually the world has made significant progress in various areas. Among the most notorious is the possibility of Adoption between Lesbian, Gay, Bisexual and Trans (LGBT) couples. Although the problem is that so far there are very few countries that completely allow this action. While in others it is regulated but with many limitations.

In that sense, the homoparental adoption It is understood as the possibility that two people of the same sex may have the legal power to form and educate a child as their own.

Adoption by same-sex couples is legal in 31 countries, and adoption of the spouse’s child is also allowed in Slovenia, Estonia, San Marino, Taiwan and Liechtenstein. It is usually debated to allow it to coincide with the approval of marriage between people of the same sex, by establishing equal rights and granting the same guarantees as a heterosexual couple.

For its part, in many countries it is still illegal for members of the LGBT community to adopt children. The following map uses data from the International Lesbian, Gay, Bisexual, Trans and Intersex Association (ILGA World) to show where joint adoption and second-parent adoption are allowed, along with countries where there are no laws allowing same-sex couples to adopt.

Types of adoption between LGBT couples that exist

Read:  Welcome to Raccoon City arrives on Netflix in some countries

As shown in the graph prepared with information from Statistical, a liberal stance on gay rights can be seen in Western Europe and North America, where at least some form of adoption is allowed. While most countries in the region allow both types of adoption, in Estonia, San Marino, Slovenia and Switzerland, only second-parent adoption is allowed.

For its part, in Latin America a more mixed picture is shown with Costa Rica, Argentina, Uruguay and Colombia with the most progressive laws on the continent. While Mexico is at a midpoint. Currently, adoption between couples from the LGBT community is only allowed in some entities but not throughout the country.

For its part, Africa is one of the most retrograde continents in this area. Until now, this adoption is only allowed in South Africa, while in the rest of the region there are no legal regulations.

This costs to buy a franchise of Similar Pharmacies

The 4 worst recent injuries in the NFL

PAHO publishes new guidelines for the treatment of leishmaniasis

How many medical offices are opened each year in Mexico?

Milk formulas are harmful for babies from 0 to 36 months: SSa