Bullfrag
Home Uncategorized Comparison iMovie vs Final Cut Pro, which one is better to edit... 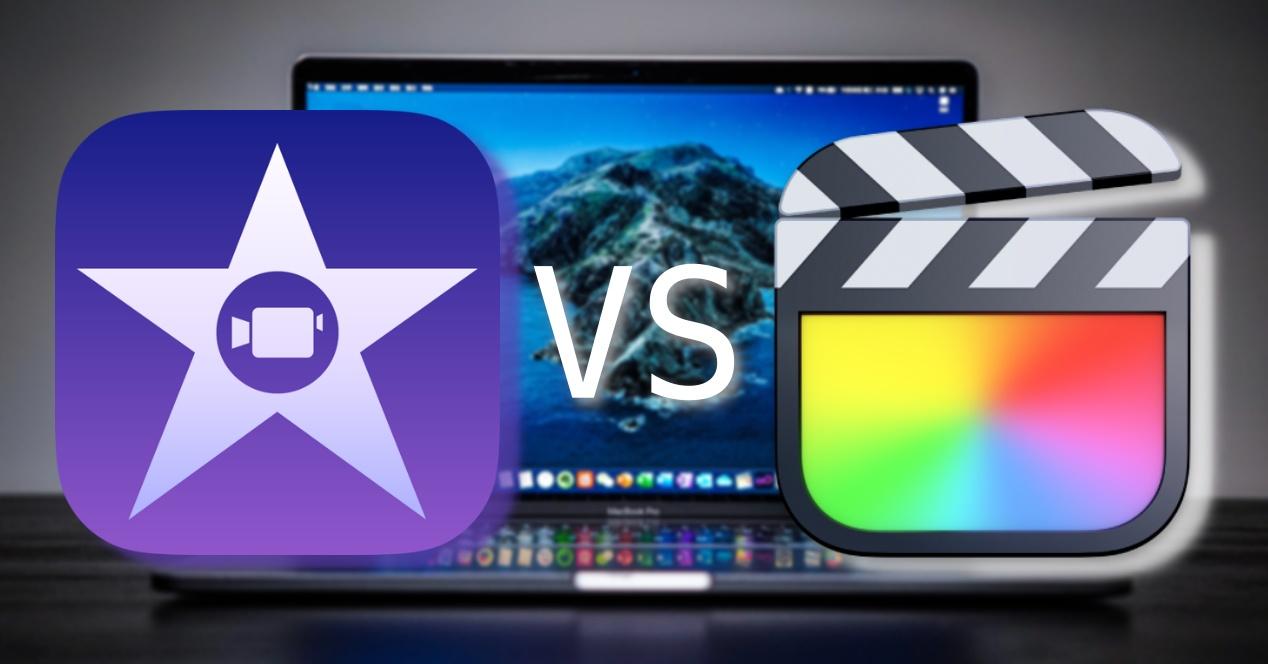 Facebook
Twitter
Pinterest
WhatsApp
Index hide
1 What audience are they aimed at?
1.1 Devices on which they are available
1.2 Do you have to pay to use them?
2 App design
3 Available functions
3.1 What video and audio formats can be used?
3.2 Can you edit video vertically?
3.3 Do they have professional functions?
3.4 Which one do you edit faster with?
4 Additional tools

What audience are they aimed at?

In order to carry out a fair comparison between the two video editors, in the first place a series of points must be analyzed that make it very clear what the target audience of each application is. Obviously the Cupertino company has not developed two applications aimed at the same audience. In this way, iMovie is a video editor focused on users who are starting in the world of video editing, while Final Cut Pro is designed for professionals in the sector, hence the differences that we are going to tell you about below.

Devices on which they are available

The first big difference and one that clearly exemplifies the target audience for both applications are the devices on which you can find them. On the one hand, iMovie is found both on iOS, as iPadOS, and of course, macOS, therefore, it is an app much more accessible by all the public through the different devices that Apple offers.

On the other hand, Final Cut Pro, being a video editor focused on the professional public, is only possible to use it through an Apple computer, that is, on macOS. This is one of the demands of iPad users. Since Apple has been promoting the iPad for years as a professional device thanks to the power of many of its models and the versatility of its size and characteristics, these users are hoping that the Cupertino company is able to carry one of the best video editors professional on the market to the iPad, a device that more and more users use for their work life.

Do you have to pay to use them?

The second point that, again, highlights the differentiation that Apple makes in the public that uses iMovie and Final Cut Pro is that it costs to use both applications. On the one hand, Apple makes iMovie fully accessible to all users of their devices since it is a totally free application, that is, you do not have to pay absolutely anything to use it. Any user who has an iPad, iPhone or Mac, has the possibility to install iMovie without any problem.

On the other hand, Final Cut Pro, being a professional app, does have a cost, and also quite high for those users who perhaps are not dedicated to the professional world of video editing, being of 299 euros. As we said, it is a high price but for video professionals it is well worth it. However, Apple provides the option to enjoy a trial period in which users can use Final Cut Pro and see for themselves if it is really worth it to carry out such an outlay of money.

Now is the time to talk about the design of both applications. Apple is a company that always tries to maintain the same aesthetic and design line both in its devices and in its applications, and in this case, we can see it clearly with iMovie and Final Cut Pro. Although they are two focused video editors To different audiences, they initially have significant aesthetic similarities. These similarities are undoubtedly great news for all users who start their way in video editing with iMovie and eventually make the leap to Apple’s professional editor, Final Cut Pro. This causes that once you become familiar with the iMovie interface, it won’t cost you anything to do it with its older brother.

Leaving aside the similarities between both editors, the reality is that the interface presented by both is very intuitive and easy to understand in a short time. After all, what Apple is looking for is to make things easy for all users who opt for these two video editors. Obviously, in iMovie, having fewer resources, it is somewhat easier to handle with total dexterity and master all the functions it has.

As you can guess, if we have commented that iMovie is a video editor for beginners and Final Cut Pro for professionals, it is due to the functions that these two applications are capable of offering to their users. This does not mean that iMovie falls short, since it perfectly meets the needs that users who have a basic and even intermediate level of video editing may have, however, Final Cut Pro puts fantastic tools on the table for all professionals in this sector.

What video and audio formats can be used?

One of the most important points when it comes to editing video is the compatibility of editing programs with the different video formats that exist in the world. In that case the difference between the two applications is not very great, although it does exist. Here are the formats that support on the one hand iMovie and on the other Final Cut Pro.

In the case of Final Cut Pro, as it is the video editor dedicated to professionals in the sector, as you will be able to see below, the range of compatibility with different file formats is enormous, something obvious and understandable given to the public that this app is targeted. The formats are as follows.

On the other hand, in the case of iMovie, obviously the range of compatibility is much narrower, something totally understandable if we look at the audience this application is aimed at and which, therefore, does not have as many needs when working with files of different types. Here is the list of files compatible with iMovie.

Can you edit video vertically?

Vertical video is increasingly used by all users due to the boom in the consumption of multimedia content on social networks that people use on their mobile devices. Therefore, the ability to edit video vertically is practically essential and in this case we do find a big difference between the two applications.

On the one hand, Final Cut Pro, how could it be otherwise, has all the possibilities when it comes to changing the aspect ratio of any video you want to edit, that is why you will not have any problem if you want to use this application to edit video in vertical format. However, with iMovie the process is a bit complicated and it is really that this Apple editor does not give users the possibility to edit video with a vertical aspect ratio, but that does not mean that you cannot edit video vertically. The only thing the user has to do in iMovie is to rotate the image so that, once the video is exported, you can rotate it and get a vertical video.

Do they have professional functions?

The tools and possibilities provided by each of Apple’s video editors is another of the great differences between these two applications. This is nothing new and obviously, it is something predictable taking into account the two main points of both apps, which are the audience they are aimed at and their price.

Which one do you edit faster with?

When it comes to editing video, it is very important, especially if it is going to be an action that you carry out regularly, to find a program that allows you to edit quickly and fluently. For this it is very important that the application in question has an intuitive user interface, so that you are always clear on how and where you can carry out each task. In that regard, both iMovie and Final Cut Pro are very similar, in fact we have already mentioned a few lines above that aesthetically they are two applications with many similarities, since in this way Apple facilitates the transition to all users who go from iMovie to Final Cut Pro.

If we look at the export of the video file, the reality is that the speed of this task will largely depend on the capabilities of the computer with which you are editing. Now, all things being equal, the most common is that Final Cut Pro is capable of exporting the same video at a higher speed than iMovie, without this difference being too alarming for all users who opt for Apple’s free editor.

Finally, another of the great differences that we have to comment on in this comparison is the possibility of using additional tools, that is, having external functions that by default are not installed in either iMovie or Final Cut. This is what is usually known as a plugin and that in the world of video editing is so important.

Both applications have the possibility of using third-party plugins, which in some cases greatly facilitates the work in certain actions and even increases the possibilities of the application itself. However, the reality is that the variety and quantity of plugins that exist for iMovie has nothing to do with the catalog available for Final Cut Pro, which is much larger. This is normal since the use of plugins is much more necessary in professional editions than for those users who have a basic level of video editing.

So are the incredible results of PS5 in the UK | Gaming