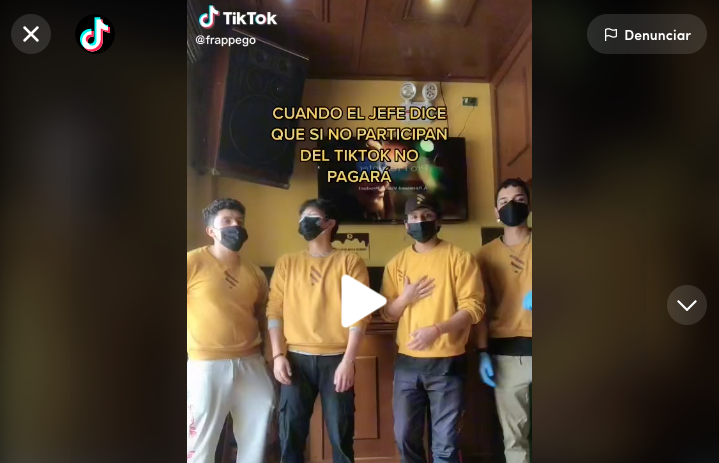 The boss of a company in Peru forced his workers to record a video to upload it to TikTok and the result has gone viral.

The creation of content on social networks is, today, one of the main trends among brandsespecially since the arrival of the pandemic, when consumers, in the absence of person-to-person experiences, were forced to seclude themselves on their digital platforms.

All over the world, it can be said, the same thing was experienced: a period in which leaving home was not an option and, therefore, delivery applications, which had already been gaining relevance, achieved a greater presence in this period of lockdown.

FrappeGo is one of the delivery platforms that has attracted the most attention in Peru, country of origin; a platform that is dedicated, especially, to the sale of frappés through its site.

However, in the last hours, the company It has gone viral on TikTok thanks to a video in which a group of delivery workers is seen for which, apparently, they were forced by the company.

The video begins by saying “When the boss says that if they don’t participate in TikTok, they won’t pay”, fact that implies that FrappeGo workers were forced to record said video to share it with the followers of the account.

No one was forced to record this tiktok? #Huancayo #frappego #Comedy

The video has quickly gone viral, adding more than two and a half million views.being one of his videos with the most interactions on his profile.

TikTok and its growing power

And it is that, at present, there is no doubt that TikTok has become a great showcase for brands, thanks to the scope it has and, above all, to the interaction it has had with the new generations.

Similarly, since the arrival of the pandemic, the Chinese social network has generated a great impact on the new generations; a social network that, derived from the pandemic, achieved very significant growth, which has allowed it to reach one billion monthly active users.

In that sense, It’s no coincidence that the ByteDance platform is most popular among 16-24 year olds.that is, the so-called Generation Z.

Its growth has been such that, to date, is the most searched site on the internet, as confirmed by the Internet 2021 Year in Review studywhich indicates that the ByteDance platform has already surpassed the internet giant, Google, becoming the most popular site in the world.

This means that, in just one year, the platform went from seventh place to the top, surpassing sites such as Facebook, Microsoft, Apple Netflix and Amazon.

However, the last few days have not been the best for the ByteDance social network, as a report was recently released stating that Facebook started a campaign against her in order to discredit herassuring that it is a real “threat”, because it is a foreign social network that is number one in sharing data used by adolescents.