Boxing champion gets out of the ring and goes to OnlyFans 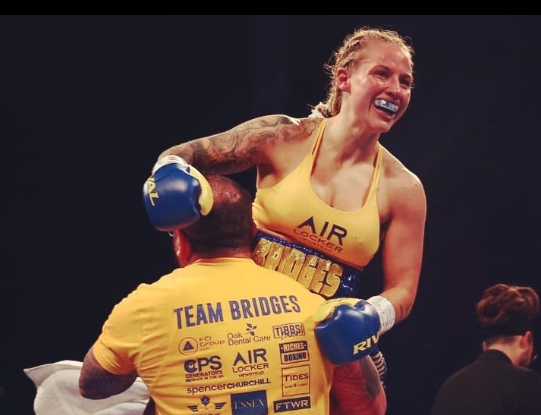 Ebanie Bridges, known as the “blonde bombshell”, decided to leave her boxing gloves behind to dedicate herself to creating content on OnlyFans, as has happened with many other athletes who find a much more profitable source of income on the platform.

By now, it is well known that the popularity of OnlyFans grew as a result of the arrival of the pandemic: After having 300 thousand creators, the platform came to register more than one billion users which, daily, went up and began to charge for their contents.

Little by little, the platform was positioning itself, mainly, as a space to sell explicit nude content, despite the fact that creators of all kinds and for all tastes live there.

Now, by October of last year, OnlyFans, according to Axios data, already had 1.6 million content creators and more than 150 million subscribers worldwide., which, according to some estimates, spent close to 2.3 billion dollars; of that total, around 85 percent would have done so in content of a pornographic nature.

From this perspective, we are talking about a space that was even used for the niche of sex workers; However, it was not the only beneficiary, since, to tell the truth, it is a platform that, in a way, is open to all kinds of creators and, above all, to those users who seek extra income or dedicate themselves to full to such a profession.

Read:  Woman for whom tiktoker left Harvard appears and tells her version

Let us remember that, in this context, a survey carried out by Morning Consultation reveals that, only in Latin America, more than 80 percent of people have in mind becoming content creators, a fact that shows that, more than a fashion, we are talking about a profession that, without a doubt, will have conquer the next generations.

Boxing champion gets out of the ring and goes to OnlyFans

The history of OnlyFans is known to all and it is thanks to this that, to this day, we are already talking about a space that has been consolidated for the growing number of users who want to become creators.

This is the case of Ebanie Bridges, known as the “blonde bombshell”a former boxing champion who made the decision to “hang up” her gloves to fully dedicate herself to her OnlyFans career.

In fact, in her last appearance in the ring, Bridges announced her OnlyFans account in a somewhat peculiar way: dressed only in lingerie.

“I was the first to weigh myself in lingerie and received a lot of backlash. But I paved the way for other women in sports to have the confidence to do the same. I expect a similar controversy with this, but I try to be a pioneer in the sport and to inspire many other women so that they can act freely without worrying about how they will be judged. Now you can get exclusive content from my training, my everyday life, plus all the fun stuff.”Bridges mentioned in an interview.

OnlyFans is, in short, one of the most relevant platforms for the Internet community and the case of Ebanie Bridges is not the only one in terms of women who decide to leave their profession to enter the creation of adult content.

In Mexico, the case of a fighter became popular for revealing that through OnlyFans, he generates higher income compared to his previous profession.