AMLO affirms that now he will lift the public health system

By NicolasAugust 31, 2022No Comments4 Mins Read 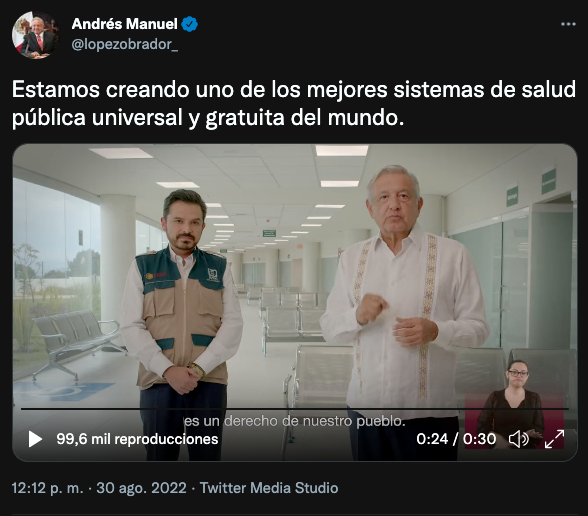 The announcements on the occasion of the fourth government report of Andrés Manuel López Obrador have already begun to be disseminated. The objective is to publicize the work carried out during the last 12 months and mention its following commitments. As part of these announcements, a video was broadcast in which the president talks about the public health system to which it aspires.

In this sense, since before he became president he mentioned on several occasions that health was one of his priorities. He also turned the phrase “first the poor” into one of his references to gain popularity among the population.

For his part, one of the commitments that he mentioned from the first day of his administration is that Mexico, for the first time, would reach the universalization of health. This is a goal that the last rulers have promised but none have achieved. Instead, AMLO has said that his ultimate goal is offer care and medicines free of charge to all Mexicans.

Despite good intentions, not everything has gone as planned. In the first instance and as it is mentioned in its promotional video, the arrival of the pandemic interrupted all the plans that were had. During 2020 there was a radical change that forced to change all the strategies that were in place.

Now, in this new spot, López Obrador, who appears accompanied by the director of the Mexican Social Security Institute (IMSS), Zoe Robledo, affirms that “the pandemic is over”. Therefore, it is time to continue with what was previously planned.

We are creating one of the best universal and free public health systems in the world. pic.twitter.com/DLbgrzXUWv

In the same way, he affirms that for decades the neoliberal rulers focused on the healthcare privatization. Instead, according to his words, now the situation is different. For this reason, he firmly mentions that “we are going to lift the public health system.”

This promise is the same one that has been repeated frequently for the last four years and although some actions have been taken, it has not yet been achieved.

One of AMLO’s most emblematic phrases is that Mexico would have a Nordic-style health system. The problem is that to achieve it, you must first invest enough. To put it in perspective, Sweden spends 11.9 percent of its Gross Domestic Product (GDP) on health, while Norway spends 9.7 percent on this item. For its part, in Mexico the figure is barely 2.7 percent.

Another point to note is that the health systems of the Nordic countries have been operating for several years thanks to prevention rather than cure, which has caused the rates of chronic degenerative diseases such as heart attacks, strokes and cancer to decrease. .

As a whole, the Nordic countries offer free health care and medicines to all their inhabitants, in addition to doctors and nurses having competitive salaries commensurate with the importance of their activities.

“The health system was on the ground but the 4T has raised it”: AMLO

“I want to go down in history as the President who has done the most for the health system”: AMLO