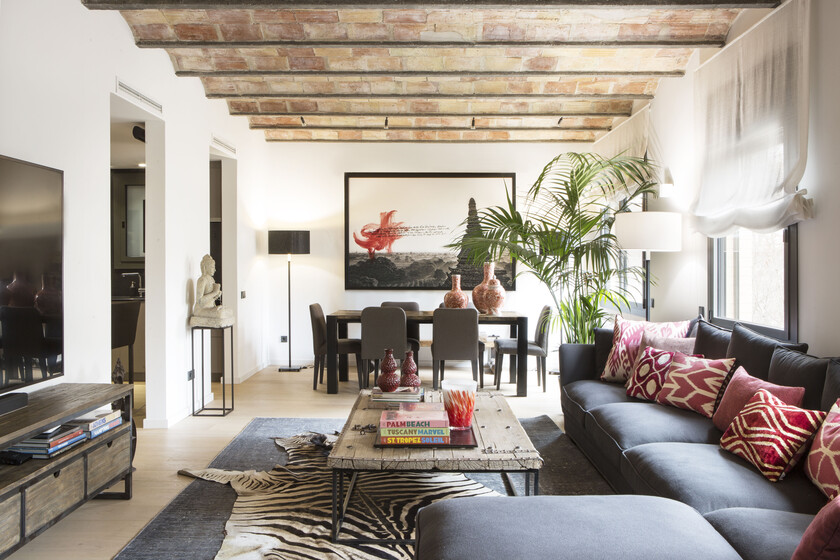 This has been the first reform to which this apartment of approximately 150 m2, located in the upper area of ​​Barcelona, ​​has undergone. The team has taken care of her Luzio Design & Projects with whom the current owners had previously worked.

The new owners, a family with three children, wanted to enjoy a current floor in accordance with current ways of life and canons, something difficult to achieve with what was its initial distribution. Before the reform, the apartment was very compartmentalized and included more than ten rooms.

The clients wanted the flat to have a common area that was as wide and diaphanous as possible, and that the rooms for their three children were the same size.

Adjusting to these demands required a comprehensive reform. After the demolition of all the walls, the interior designers of Luzio Design & Projects projected a new distribution “very well used, practically without a corridor, in which a rectangular tablet was established in the innermost part of the house where the four bedrooms are lined up (including the suite) and the area of fully open kitchen, living room and dining room located overlooking the street and L-shapedexplains Xavi Martinell, interior designer for the team at Luzio Design & Projects.

The work of the interior designers included, in addition to the reform, its interior design and decoration. An integral work whose result was significantly influenced by the recovery of two original structural elements of the house; the ceiling with the Catalan vaults and the exposed brick walls of the living room and the suite. Both give an idea of ​​the age of the house and were a pleasant surprise, since they were hidden and emerged with the work of the works. The owners wanted to keep them, not only for the height gained, but also for the personality it brings to the room. In this way the result was a “a unique apartment, with a lot of character and an industrial touch”.

Almost unintentionally, due to the rediscovery of these original elements and the new distribution in which the usual hall is dispensed with and direct access to the kitchen open to the large social area, access to the house is reminiscent of a loft-type housing, without distances between the day and night areas, and with a parquet floor of very light oak slats as a common thread throughout the space.

Special care has been taken kitchen design because it is the one that welcomes you when you enter the house. Its lack of natural light is compensated when you illuminate it because it is very cozy thanks to the design of the space and the pieces that are part of it.

Thanks to its design, the fact of accessing from the entrance directly to the kitchen is practically not perceived as such, since the first thing you find is an old wooden consolewith a mirror and a lamp, completely identifying pieces in a hall. And with the vision of this piece of furniture, of a painting and of the big island it is possible to subtract the functional effect that this space really has.

The main protagonist here is the island, which is presented as a single piece, almost 3.5 meters long, with a six-centimetre-thick recovered wood top and designed as a very versatile support. One end has been set aside in the form of flown bar, with four stools.

The modern and minimalist line of the kitchen made to measure, in dark gray lacquered color and without handles, also helps a lot to soften its functionality, since, in addition, the main appliances are all integrated aligned on the wall that is behind when you enter, and many of them they are paneled to be more discreet if possible.

The island also helps to articulate the traffic in the kitchen, since it leaves two parallel passageways in line with the load-bearing wall that had to be maintained, taking advantage of it to hang the television. Said wall also acts as a visual separator between the kitchen and the adjoining living-dining room, allowing, in turn, natural light to enter.

In this space the absolute protagonist is el original catalan volta roof recovered that adds character and height to the social area of ​​the house.

Next to the kitchen is the dining room for six people with a table that follows the industrial style line of all the furniture in this space, combining wood and iron.

In the central part is the living room with a huge sofa with chaise-longue made to measure and made of linen and cotton velvet, which is complemented by the coffee table designed from an ancient Chinese door on an iron structure and with the TV cabinet that also combines recovered wood and iron to continue with the modern industrial touch. A large Iranian rug, with superimposed zebra skin, completes this environment.

At the other end a small office to telework, framed by the original exposed brick wall. The desk cabinet is also an old indian table which has been placed in front of the two wooden and iron shelves that belong to the same collection as the one with the television. And the same thing happens with the armchair that, in this case, is from the same collection as the ones in the dining room.

The aim is to create a harmonious envelope, with matching piecesfrom a similar base of materials and a very neutral color palette focused on browns and blacks, leaving the most daring colors for decorative accessories and textiles. And all this on a very light wooden floor, almost white.

This large space boasts great natural light thanks to the three windows that it has and that the studio dressed with light blinds made of white linen that filter the light. Regarding artificial lighting, it was decided to combine some white wall sconces located between the windows with two lines of ceiling spotlights made “on purpose” by a blacksmith with an exposed electric cord.

The main room or suite

In the suite has remained the same aesthetic line as in the living room. From the decision to keep the original recovered roof, the industrial touches They are especially present in the furniture of the chest of drawers at the foot of the bed, the bedside tables and the small desk, since they combine recovered wood with an iron structure. Also here the exposed brick wall has been chipped to add character to the area of ​​the headboardwhich was custom made with a plank of teak wood.

The suite includes an open custom made dressing room the carpenter of the interior design studio and located between the rest area and the bathroom.

The bathroom flooring is the only one in the house that was covered with porcelain stoneware with microcement effect in taupe gray, the same color that covers the walls to generate a uniform envelope, on which the custom-made furniture in natural oak stands out, whose finish provides ambient warmth. The contrast is generated by the black color chosen for the taps.

A large gray chaise lounge sofa presides over the living room. This El Corte Inglés model is also a sofa bed and has a chest. Perfect for extra storage for 1,695 euros

In the absence of wallpaper, you can always place a brick-finish vinyl wallpaper on one of the walls. Like this Leroy Merlin model, red brick vinyl wallpaper 0.53 x 10 meters (width x length) for 24.99 euros

In Decosphere | Open doors: a ground floor with a garden completely renovated with innovation and creativity as key elements

A lemon tree, two patios and a terrace in this semi-detached house in Valencia